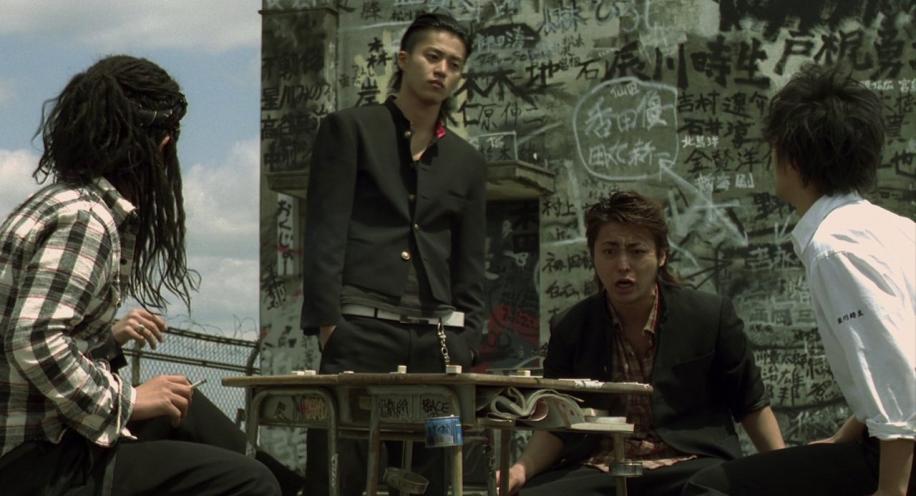 Any film adaptation, from whatever source, bearing the name Takashi Miike demands you pay attention. If there's a director with a more eclectic canon of work to his name I’d be surprised. From the tense sadism of Ichi The Killer to the candy coloured, occasionally pervy Yatterman, I can think of no one else who spans such a chasm from wanton bloodshed and extreme violence to oddball high-jinx.

He's a force of nature, happy to helm adaptations of anything he sees fit, be it a fondly remembered anime (Yatterman), a videogame (he's adapted both Sega's Yakuza series as well as the DS comic courtroom detective story Phoenix Wright: Ace Attorney) or even slices of classic cinema you'd think any sane director would steer clear of, as was the case with his remakes of Kinji Fukasaku's Graveyard of Honour and more recently Masaki Kobayashi's Hara-Kiri and Eiichi Kudo's tale of the Thirteen Assassins. So, it's fair to say he's bounced around the cinematic spectrum a bit, but with the latter two remakes he has proved concretely once and for all that the studied atmosphere of such works as Audition was certainly not a fluke.

His latest offering is an adaptation of the Hiroshi Takahashi's Crows manga, or more specifically a tie-in story set before the 26 volume printed work's narrative begins. It's a story of nihilistic young delinquent students, who form gangs and battle for supremacy in the infamous Suzuran high school, known to many as the School of Crows. It's exactly what you'd expect of a comic-book breeding ground of anarchic discontent; graffiti as far as the eye can see, petty vandalism, heavy gates and barbed wire you suspect to keep the trouble makers in; in terms of educational facilities it sure ain't Eton.

Punks stand around looking mean in their oh-so-carefully picked out boyband-esque tough guy ensemble, funny haircuts and prominent jewellery and all, oh and don't forget, nobody in comic-land gets lung cancer so smoking is still very much a sign of coolness. If it's sounding like a cliché that's because to some extent it is. Crows Zero doesn't try to reinvent anything, find hidden depths or challenge its audience, it can be summed up in a simple sentence: Youths fight. If you want more, go and rent Atonement or something, because Miike makes no excuses for what he's bringing to the screen here, if anything this is his comfort ground, nobody brings two-dimensional violently charismatic figures to the screen with such aplomb.

At its core Crows Zero is pure young gangsters, the narrative is essentially a power struggle for control of the school and the rights to proclaim yourself as the daddy. Think Scum without the social commentary or inventive use of a sock. Reigning monarch so to speak is Tamao Serizawa (Takayuki Yamada – Thirteen Assassins), though even he has failed to truly gain total control, many believing it is impossible to entirely unite the hoodlums under one pubescent godfather figure. That is until Genji Takiya (Shun Ogori) transfers to the school, spies the graffiti stating Serizawa to be “The King of Suzuran”, and fast makes it his mission to wrench the reins of power from him and rise to the top. Being the son of a yakuza obviously helps his drive, daddy dearest having promised him succession in his criminal empire if he tames the school. Characterisation is rarely evolving here, the cast are hard-wired to fight. As I said, these are largely two-dimensional creations, a bit of emotion comes to play, but they don't need a scene where they give a Michael Corleone style speech to their loved ones explaining the good intentions behind their drive for domination, they are largely feral youths, fighting for the sake of it.

If students attacking each other sounds like a slice of “youths gone wild” tabloid paranoia, fear not, Miike deftly shifts and turns the mood of the film, weaving lighter strands with the bloody conflicts. A few yakuza pop up to remind us this could get serious, but their screen time is more a juxtaposition to make the central story feel more like teenage tomfoolery than proper life-or-death potential manslaughter en masse. You might assume you will dislike these wayward kids, in fact there's a sneaking suspicion, like with all pulp gangster fiction, that the true delight from a viewer's perspective is the complete detachment from the necessity to feel real empathy - watch the violence unfold between comic-book individuals and dissociate yourself from condemning it. Look at the promo material and read the blurb and you'd think that is the root of its appeal. Think again, it's laced with humour and charm, and plenty of it.

The core comedic foil is Ken, a hapless yakuza eager to help Genji conquer the school, something that was his dream as a youngster too. He's your typical “all mouth and trousers” type, big on talk but the façade soon crumbles when push comes to shove. Some scenes unfold like a Japanese American Pie, Genji's first attempt at winning over one of the schools indomitable generals by getting him a date is a classic example. Idiocy abounds, from the search in the streets for a suitable candidate, to the evening itself, it's high farce, slapstick and a nice counterbalance to the fighting. Underneath, these lads are fools, and the fact they speak through their fists is largely because they are unable to communicate in any other way.

It's hard to take any dystopian school ground fight seriously when the daubings on the walls, intended to be a sign of anarchy, reek of young plebs who still find hurriedly scribbling the “F” word to be raging against the machine, and the students partake in an elaborate game of ten pin bowling, with human pins flying ten feet into the air for effect. As soon as you've seen the key tough guy, Serizawa, introduced one minute as a brooding figure, the next losing control of a moped and headbutting a van and left stationary in mid-air in true slapstick style, you can't feel there are any real consequences. The early mood is definitely cartoonish, even Takiya don't escape the puncturing of his tough guy persona, as he's shown sobbing drunkenly after the failed date.

It's a to-and-fro of lighter and darker atmosphere, but even the latter moments aren't bleak, that isn't what Crows Zero is about, the characters may appear to be extras from Battle Royale but this tale doesn't even attempt to focus on the same genuine struggle for survival. The film opens with a real display of the consequences of violence, and it works quite well as a means of keeping the possibility of this youthful game of fighting holding real consequences. If you know your manga you'll understand the differences between the shonen (young male) and seinen (more adult) markets, Crows Zero is firmly aiming towards the former camp. To appreciate it, you need to accept it for what it is, full of energy and brimming with identifiable teenage attitude, a mix Miike weaves together, for the most part, extremely effectively, pushing the pulse-pounding encounters to the fore at regular intervals and maintaining characterisation that may be shallow, but ticks all the right boxes to be “cool”. Miike brings the swagger of Takahashi's work to the screen, and once the soundtrack kicks in it's hard not to be swept up in the furore.

The gangs and their allegiances make up the majority of the film's run-time, who's who in what class, who to challenge to get to the top, proving who's toughest etc. Pose, fight and repeat. There is a veritable host of mad looking individuals, far too many to go into any detail, either in the film or this review, suffice it to say it's an oddball roughhouse ensemble, with a female character (not in the manga) as a mild foil to this testosterone overload. The madcap humour shines through in patches, punctuating any air of true danger with the absurdist drama of over-the-top high-jinx, you can't really assume there are any consequences to be taken seriously in this alternate world of care free risk taking and scrapping. There may be a vague nod to character complexity, the odd teary eye, but it's pretty shallow, never moving into deeper emotional waters or dwelling there for longer than the necessary filler between fights or minimal amount of development to propel us towards another encounter, and that's just the way it should be!

Miike knows where the meat of this adaptation needs to be: The fights are stylised, the Japanese rock starts pumping and you know this is going to be all for show; big overemphasised punches, nary a cracked knuckle in sight, but lots of bloodied faces that'll never scar. As with any Miike film, there are elements that jar (I’d still argue the international cut of Thirteen Assassins was superior to his own) and here I could have done without the sole female character singing, in fact they could have cut the female character out entirely – though if the cringeworthy faux urban club-scene song she “sings” early on doesn't put you in the mood for violence nothing will. The end fight scene, fists flying in the pouring rain, is almost ruined by the interruption of her warbling a mawkishly sentimental tune with lyrics so inane Cowell and co would describe it as too shallow - “the life you live is the sunlight that shines on them, the hero lives in you”. Sounds uncomfortable, excuse me while I try to keep my lunch down.

Perhaps a love of slightly kitsch videogames-style atmosphere aids an appreciation of the film, if you've ever pulled off a dragon punch you'll probably feel at home here. It feels like an end of level boss is waiting in the wings at some points, because that's how formulaic it can be, but I quickly warmed to its charm. It's a fine example of source material playing to a director's strengths, Miike could have done this in his sleep, he weaves weird characters, violence and odd humour like no other, resulting in a healthy mix of knuckle-breaking brawls, youthful exuberance and simplistic melodrama; like a Ninkyo eiga channelling The Wonder Years. Accept it for what it is - posturing, pratfalls and punching, all wrapped up with poster-boy angst appeal.