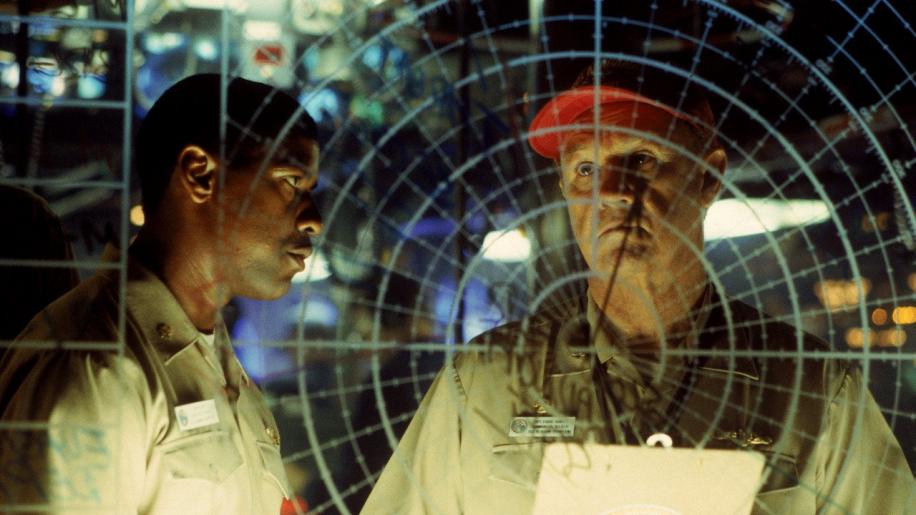 When I was a kid, I always wanted to be a submarine crew member, but sadly they wouldn't let me in due to my need to sleep with the window open. The next best thing, then, is a quality movie about submarines. Two behemoths of technology going up against each other in the immeasurable, cloudy depths - a game of cat and mouse featuring man made leviathans, powered by nuclear technology, which can only end in tragedy for one of the combatants

Even better, however, is when a deadly game like this is played out simultaneously on one of the vessels, as two senior members of the crew go at each other in a battle of wills that perfectly mirror the greater battle going on outside the hull. Add to this a deadly sense of jeopardy as the future of the whole world is at stake and get the two crew members to be played by a pair of acting heavyweights - and you have a very promising idea for a film.

So here we have that film, released on Blu ray. Crimson Tide is one of Jerry Bruckheimer's mid nineties productions, slotted in between Bad Boys and The Rock. Out of these two movies it probably has more in common with the latter - as it boasts an intelligent story line and top level acting talent.

The plot is quite narrow in focus, even though the subject matter is potential world war. It is this intimate look at a tense situation which gives the film a lot of its character. We open as Captain Frank Ramsey (Gene Hackman) is interviewing young up and coming Lt. Commander Ron Hunter (Denzil Washington) for a position as his second in command on his nuclear submarine. When both characters prove to have very strong wills, Ramsey decides that Hunter is the man he wants as his XO.

Once the mission starts, however, it soon becomes clear that the two men are heading for a collision course. Rebels take over a Russian missile base, and seem to be on the verge of getting the codes they will need to launch the missiles at various strategic targets. The sub is manoeuvred into a position where they can fire on the base and await orders. When a fire breaks out in the galley, and Ramsey launches an exercise during the aftermath, a man dies and the first seeds of conflict are sewn between the two protagonists.

There is barely time to draw breath before a message is received ordering them to launch a missile strike, and they begin to prepare for an act which will provoke World War III. A second message starts to come through but then fails to complete due to a technical failure. This then leads to a serious decision. Should they launch as originally ordered, or should they try and facilitate receiving the second message and risk the rebels launching their missiles.

So, at the same time as being under attack from a Russian Sub, the character conflict breaks out on board as one man wants to go ahead and launch, whilst the other wants to wait for the second message. The crew are forced to take sides, until a mutiny ensues with resulting serious consequences.

It should be clear from the above précis that this is not likely to be your average big bucks blockbuster. Indeed, the jeopardy that the World is experiencing is merely a plot device to facilitate the conflict between the two characters. It is an unusual film indeed that dares to deal with such a huge issue yet uses it in such an intimate way - and the director Tony Scott uses it extremely well to ratchet up the tension.


Of course, the director has chosen well with his cast - and it is the performances that truly sell this film. Of course, Gene Hackman can always be relied upon to deliver a superb performance and he really gets under the skin of the character here. It is very hard to feel sympathy for the character he plays, but this is a deliberate choice. His character is one that is very set in his ways, always sure about the choices he makes, and willing to make the big decisions. The way that Hackman plays him is masterful, dominating every scene he is in and delivering a very single minded performance.

The screen really crackles when the two go head to head, however. The contrast between the two characters is really seized upon by both actors - and they portray the conflict without ever resorting to histrionics. These are two truly breathtaking performances and it is hard to understand why the two actors going head to head is not as celebrated, for example, as De Niro v. Pacino in Heat

The supporting ensemble is also beautifully cast, with every actor (however minor) bringing something believable to the piece. Most notable amongst these is Viggo Mortenson in a notable and tense early role.

One of the main reasons why this conflict is so mesmerising is the way that the film is written. At all stages, the rising conflict is kept at a believable and tense level, never becoming unbelievable and keeping the audience on the edge of their seat as effectively as any horror movie. The director contributes to this, bringing a relaxed and unhurried air to the whole enterprise. If I had any criticism of the film as a whole it would be that his camera angles are perhaps a little pedestrian and predictable - but this may well be as a result of building his set to be as realistic as possible. This may mean that the younger generation - weaned on the flashy camera angles and jump cuts of modern cinema may feel slightly short changed by the director's style. It is certainly noticeable, for example, when comparing the director's 2004 offering Man On fire with this film for style. However, in this film the performances and script do enough to paper over the unimaginative style and bring the film home successfully.

To sum up then, Crimson Tide is a claustrophobic and brilliantly written thriller, that deals with weighty dilemmas in a believable and tense way. Two superb actors at the top of their game spark off each other brilliantly and the result is an erudite, scary two hour of high tension drama. Highly recommended.