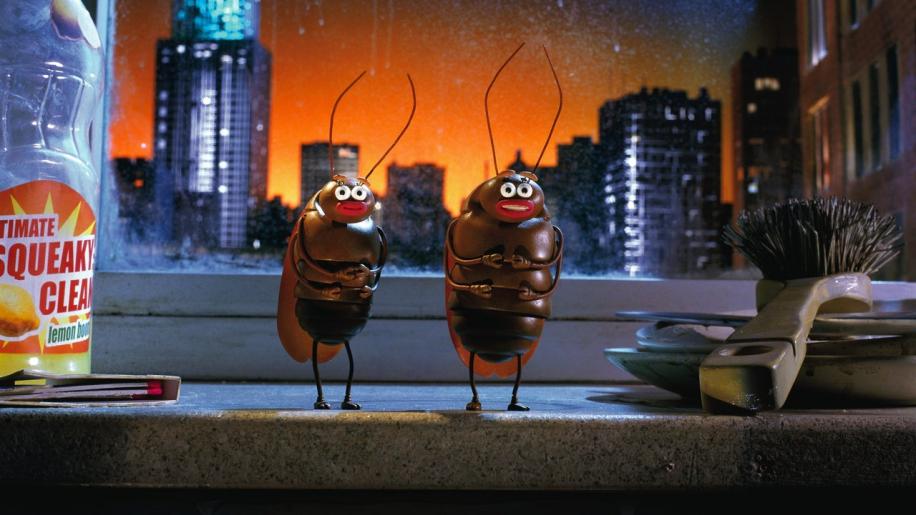 The idea is simple: Interview the general public about a number of topics and place those that shine into an animated cartoon. I am sure that we all know folk whose character is so unique they are almost too unreal for the real world, so they are perfectly acceptable for animation! Each episode is based on the answers to a particular set of questions based on subjects like Pet Hates or Sport. The answers that are given are often surreal, insightful, weird and nearly always funny.

I will admit that other than Chicken Run, I haven't seen any of Aardman's output. So, I based all of my expectations on Wallace and Gromit's somewhat playful appearance. The appearance of a cow marked with butchering lines blithely talking to camera was an unexpected, and welcome, surprise, making me reassess the tone of Creature Comforts. This unspoken humour, black or not, is a work of genius and had me laughing out loud at least once an episode. The two old women Muriel and Catherine are such good fun, even when they aren't supposed to be (look out for when they start talking about their husbands) and the wrestling sketch are up there with “Kicking bishop Brenan up the arse” and “Spaced's kitchen rave scene” as moments of pure comedy gold.

Of course, the choices of what animal makes for a perfect match are one of the key choices that can make or break a sketch. A welsh guy, characterised by a Shar-Pei, is spot on, wonderfully augmented by a small pup's reactions in the background. A spider sitting in the wing mirror of a car is not only executed well, but brilliantly observed; I know that every spring a spider takes residence in my wing mirror and does not leave until October. Such everyday observations are a staple of many a comedy sketch, but Creature Comforts distils this into a, mostly, pure slice of comic TV. I say mostly as not all of the characters hit the right note. There is one sketch, featuring three crows, that doesn't sit comfortably, coming across as a bit plain, so too does one featuring some slugs on top of a fence and a couple of rats outside of a potting shed. There are more and I suppose that in any other animated series they would be perfectly fine, all other things being equal. Compared to the unique characters of Derek the Shar-Pei and Bill the Mad Hare, however, they do seem a bit recessed and more than a little bromidic.

This isn't to diminish the work that has gone into their design, though - oh no! The effortless ease in which the imagined personalities shine through the animation is nothing short of breathtaking. Hat's off to the artists that put so much of their time and effort into what is a painstaking animation method. Rarely is the medium of art so gracefully used in such an accessible manner. In fact, it is a compliment to the creators that such is the appeal of Creature Comforts people who would erroneously dismiss animation as “Kids TV” will watch Creature Comforts and thoroughly enjoy themselves.