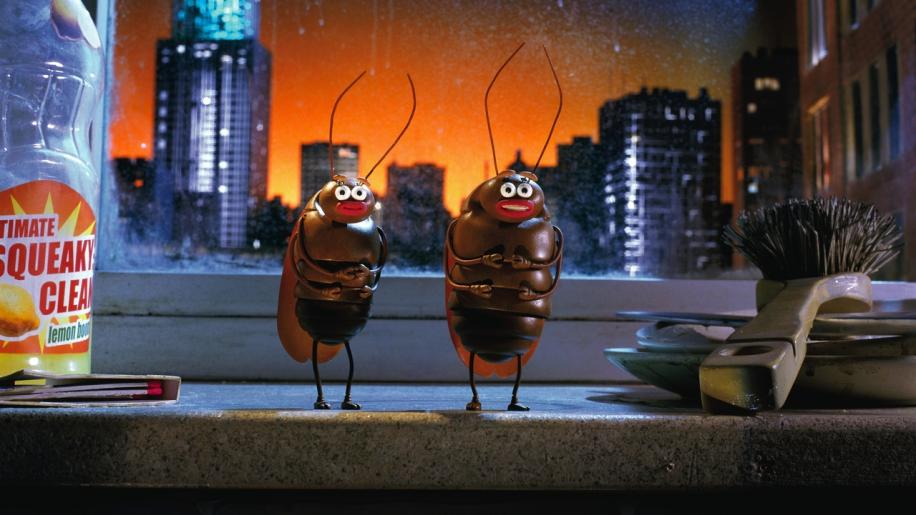 Claymation's personification, or rather, animal-ification of everyday ideas and attitudes has been a rip-roaring success since the early days of TV commercials. Everyone knows the format by now - Joe Public is interviewed on a variety of subjects and the responses are edited together and, with the addition of a script and a complete menagerie of plasticene creatures from virtually every species, the show is unleashed under the banner of a particular theme. The rundown for Series 2 is The Beast In Show, The Brood, Pet Hates (a fan-favourite), Impressions, Animals In The 'hood, Sport, Monarchy Business, Animal Magnetism, Bed Time, Self-image (which has some cool snipes at vanity), Communication and Safari Park. You have the option to watch the series episode by episode, or you can choose to view your favourite characters' moments in lumped-together chunks - such as the wrinkly dogs Malcolm and Derek, the bats Muriel and Catherine, suburban cat and canine couple Captain Cuddlepuss and Trixie, or patriotic Geordie mouse Brian. None of the shows are chapterised, but with each little episode lasting only a couple of minutes at most, the show is easily digestible in bite-size chunks.

To say a great deal more would actually be very difficult, and would probably rob the show of much of its cheerfully off-the-wall nature. The colourful and cosy settings of a fire-glowing living-room and a hamster's cage may be offset by a shadow-filled belfry, a mud-caked farmyard and the street outside a pub but, make no mistake, the lumpy animation and thick-lipped smiles make almost anywhere seem gleefully hospitable. The inherently happy demeanour of all concerned, even if they are complaining about the things that tick them off the most, is contagious and set to a permanent slow-bake, the naturalistic manner of the performances adding to the matter-of-fact style of furry-microphone street-banter. The inanity of mumbling punters losing track of their thoughts, or just casting opinions that often seem as though they would probably crumble under the first criticism, is made remarkable purely because of the inter-species metamorphosis that the speakers undergo. Strangely enough, their points of view actually become more pertinent and relevant when squeezed out of moulded clay mouths - the thoughts and assumptions of the man on the street made more believable and realistic because they come across as the sentiments of an animal sharing our world, and its inherent problems. A person mouthing off would just be ignored. Spout such wry comments from the mouth of a horse or a cow, and world politics could be changed forever. Well ... maybe not, considering the horse's rear-ends that both Britain and America have fronting them!

Not that such deeper contexts are what Creature Comforts is all about, anyway - although Spitting Image gave it a good go with its own brand of latex lunacy. But there is a crazy sort of joy to be gained from discovering just what type of critter shares your own outlook on life, isn't there?

I love the spider perched in his wing-mirror web and the hip-hop impersonating police horse, with his cool anti-riot tactics of manure-dropping. A slug doing a chicken impression is one of the most absurd visual, and aural, treats but the sight of a gaggle of bitchy female clams is possibly the most accurate. The lived-in, at home feel of the settings is another major strength, and there is a wealth of detail to be found in the backgrounds of all the hand-crafted environments, from the glistening drop of water on the end of the hamster's drinking-tube to sight of bemused sheep huddled in a field as the flock-joker dances behind the sheepdog's back. The baboons still look frightening, however ... but then baboons have always scared me. The faces and eyes - just blobs of putty, I know - have a truly distinctive look, signifying a life that simply cannot be, yet totally convinces all the same. Aardman lend the same kind of hyper-reality to inanimate lumps of clay that Pixar imbues its crazed pixels with. And it is reassuring that both studios do it without skimping on the personality of each creation, or the narrative it finds itself in.

It's hard to be critical about such an unassuming show, but to keep the balance right, I think that there is a somewhat ironic problem with these episodes in that the mundane, everyday voices eventually conspire to lull you into a stupor. Although the concept of grafting bizarre Claymation creations to the rambling thoughts of Joe Public is a good one, the end result can often be more tedious and hum-drum than funny-bone-worrying. The joy, for me at least, is in watching the facial antics of the characters standing beside the main speaker - the darting eyeballs, the fidgeting and often inspired sight of seeing them returning to some actual animal behaviour whilst their more conversational friend is obliviously pontificating about the weightier issues of the day. The pigs are a good one for this.

“Why would anyone want a partridge in a pear tree, anyway?”

Disc 3, Merry Christmas Everybody, features the colourful festive special and all the original Heat Electric adverts - I still reckon that the tortoise, from all those years ago, is the best creation - and there is a nostalgic air to viewing these now. The Christmas Special is the perfect seasonal accompaniment from Aardman, boasting really clever lines and a rich, feel-good factor through and through, and even a Yuletide sing-along.

Well, folks, this is probably one of the lightest and fluffiest set of review discs that I have ever received. Although I love Aardman's movies and, especially, the Wallace And Gromit mini-epics, there is something slight and disposable about the Creature Comforts series. It feels like an over-stretched joke at times, yet the resolutely “British” approach to everyday comedy is always engaging. The concept is small-time, the performances are breezy and unassuming and the animation, whilst gorgeous to look at, is simple by the studio's standards. But, the result is a glorification of conversational humour, off-the-cuff observation and the uniquely eccentric attitude that the British public has in the face of modern life. Whilst the show makes me smirk occasionally, it makes my wife laugh out loud and it entrances my young son. Whatever my personal opinion, though, Creature Comforts is a work of visual genius that has universal appeal. This series, on the whole, is more entertaining than the first, with the inclusion of new characters and a sort of more assured attitude to the assorted material that the interviewees have provided.