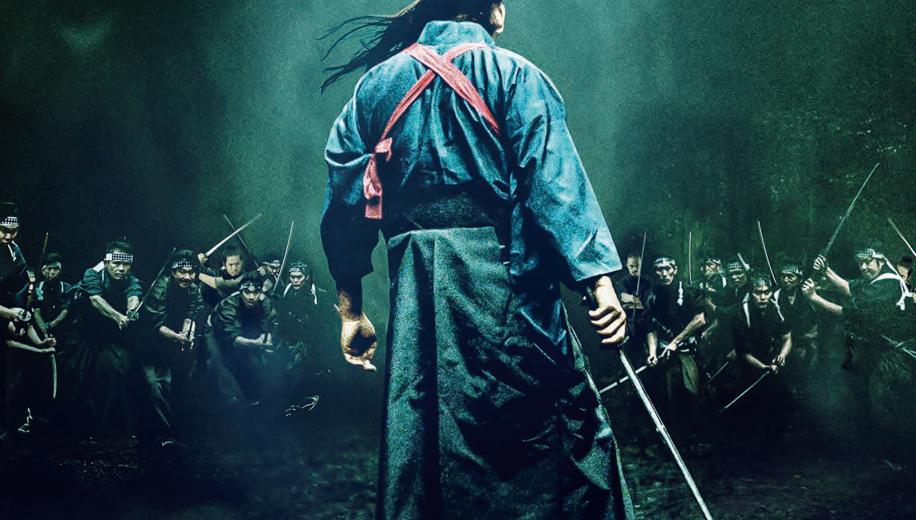 The kind of premise that - while getting the playground in all kinds of a tizzy, “the whole film is one long action scene, with one samurai fighting 400, shot in a single take!” – is sadly better left as a concept rather than a reality.

Any and all narrative is done and dusted within the film’s opening eight minutes – a samurai clan is seeking revenge but an arranged dual between its grandmasters turns into a double cross and a lone samurai (Tak Sakaguchi of Versus) is left to take on over 400 swordsmen. While the next 75 minutes shows just that. In a single take. And not a single take like so many of the genre's more celebrated ‘oners’, where it's actually nothing of the sort (a series of long takes seamlessly stitched together). It’s an actual single take.

Here, it's 75 frenzied minutes of wave after wave of faceless goons falling under our antagonist’s sword in a very good facsimile of a third person video game. So much so, it's even complete with health replenishing breaks to drink random water bottles and upgrade weapons. This analogy is taken even further with one of the final lines of dialogue having our now battle-weary lead say that he doesn’t care about duty or honour, he just wants to win!  And yet, for all the extraordinary feats of physical and mental endurance and of all round technical skill to choreograph so many fight moves and have them feel and look so plausible, like so many of its single-take peers before it, fulfilling its central conceit comes at the expense of emotion, drama and simple engagement with what we’re watching.

Because you can’t have elaborate fight choreography, there’s little variation to the kills outside of a single samurai rushing in and being dispatched immediately with little more than a single swish of our lead’s blade, or the more Street Fighter-esque combo of parry/parry/high attack or parry/parry/low attack. The repetition just fatigues the viewer, and a sense of boredom quickly sets in within the opening 20 mins. Regular ‘boss battles’ are threatened but end up being nothing of the sort, again because the single take notion precludes the use of any elaborate visual effects or the use of wires or any other means to add spectacle to the swordplay.

... but as if one set of limitations placed on the action wasn't bad enough, it throws a second one in that compounds the sense of repetition

That second conceit – that one man could take down 400 (nearly 600 in actuality despite the title of the film) – further adds to the limitations of the fights – at any point, the faceless samurai could rush our antagonist all at once and end him within seconds……but they never do, content to attack either individually or in no more than groups of two or three. It's yet another element that renders the whole thing inert and devoid of any notion of variety or even reality, no matter how gritty the tone of the film was supposed to be.

As if to prove all of this, it ends with a short fight scene traditionally shot and edited that has so much more energy, spectacle and excitement than anything shown in the preceding 75 minutes that the whole film could be used as an editor’s recruitment video.

A great concept that simply doesn’t work in reality.

The disk was reviewed on a JVC-N5 via a Panasonic DMP-UB9000 UHD disk player.

It's not a terrible picture – it's one that looks exactly like it appears to be: a digitally captured image necessitated by the requirements of the action it’s capturing

The 1080p AVC4 encoded image appears to be from digital sources thanks to the trademark ‘flatness’ of the image. Sharp and detailed, but with no depth of field or texture to it, again its aesthetic seems to be dictated by its single take conceit. During the 75 minutes, the necessary use of more flexible camera setups is given away almost instantly – the image doesn’t have a significant contrast ratio at all, leading to blooming whites, grey blacks and subsequent haloing around dark images against bright backgrounds.

There are several scenes plagued with digital noise – in the opening, a plant in the foreground of one shot is buzzing with noise, while a later shot of a young girl carrying sticks shares these similar digital anomalies. Thankfully, these are few and far between though, the rest of the time the image being fairly decent, especially with the frenetic camera moves on show. It's not a terrible picture – it's one that looks exactly like it appears to be: a digitally captured image necessitated by the requirements of the action it’s capturing.

There are two soundtrack options present on the disk – a lossless Japanese 2.0 PCM and 5.1 DTS-HD MA track. Heading straight for the 5.1 option, the track is technically proficient but again, its design is hampered by the film.

... the track has some real weight to it

When called on, the track has some real weight to it – the percussive score has heft to the drum beats and the odd sound effect (a thunderstorm at the 1:19 mark is a brilliant example) hits home hard. The surround channels are used sparingly but effectively for the music and again, the short storm engulfs the room in rain, thunder and all manner of convincing sound. But the vast majority of the soundtrack has little music or effects, outside of the grunts of the blade fodder and the clanging of metal upon metal, which is replicated perfectly well. Even dialogue is limited to a handful of lines throughout and what there is is clean and clear, with no obvious subtitle issues being noted.

Dazzler's UK Blu-ray release of Crazy Samurai: 400 vs. 1 comes utterly bare-bones despite the obvious background work that must have gone into facilitating this one-take production.

Nothing. Not even a trailer

Nothing. Not even a trailer. A real shame as some insight into just how they filmed those 75 minutes or even on its genesis (a previous production was cancelled and rather than disband the stunt crew, they decided to expand the ten-minute single take shot in that to feature length; the 75 minutes were shot back in 2011 but it took a further eight years to crowdfund the money to finish the film with its bookends and VFX blood) might have helped increase the appreciation for the film itself.

The film achieves exactly what it sets out to do – a feature length one take, single action scene. But like so many of these similar films – and not just the action films, the more low-key, dramatic ones such as Victoria – delivering its central conceit (or in this case, conceits) robs the film of some of the more basic cinematic notions, such as pacing, tension and emotional connection.

... achieves exactly what it sets out to do

This barebones disk from Dazzler does as good a job as could be expected with the transfer, with the audio and visual design similarly constrained.

Crazy Samurai: 400 vs. 1 is released by Dazzler and available on Blu-ray™ from July 5th.