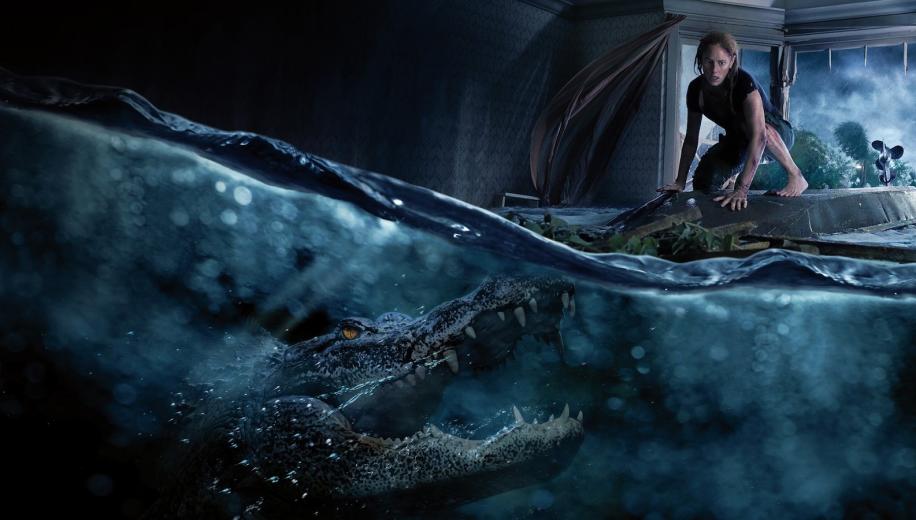 The blend of unsuspecting humans, peril and a bunch of toothy bloodthirsty reptiles is a tale as old as time in the cinema. Crawl takes that formula and pretty much boils it down to its most simple; two people, one room, murderous monsters. While it is, in some places, really quite raw and a bit clumsy, there’s something perversely appealing about Crawl’s simplicity and straight-to-the-point methodolgy.

The premise is set up straight away: Haley (Kaya Scodelario) gets a call from her worried sister (Morfydd Clark) who says their father Dave hasn’t returned calls and there’s a big storm headed their way. Haley makes the drive to go and find out what happened to dad (Barry Pepper), and eventually – ignoring big bold warnings to evacuate – finds him bleeding, wounded and unconscious in the crawl space beneath their former family home in Coral Lake. Haley tries to rescue him, but before long figures out the cause of her father’s injuries – the crawl space is also being occupied by a group of large, hungry and vicious alligators.


If you’ve seen a trailer for this, watched one of Aja’s previous releases or are even vaguely aware of what Crawl is, know that you get exactly what you expect over the 90 minutes.

Director Alexandre Aja manages to eke every element of terror out of the scaly villains, who at various points in the film (this can’t qualify as a spoiler) tear limb from limb and eviscerate human flesh with alacrity. If you’ve seen a trailer for this, watched one of Aja’s previous releases or are even vaguely aware of what Crawl is, know that you get exactly what you expect over the 90 minutes. It’s pretty taut, full of terror and anxiety and actual edge-of-your-seat stuff.

There are elements that let it down slightly – some of the CGI is less than impressive, and when we learn that Haley is a college swimmer for the Gators it’s a good sign of some of the lacklustre elements of the script. The script itself is a little puzzling; though the good majority of the film takes place in the crawl space, there’s an awful lot of time dedicated to exploring Haley and Dave’s broken relationship (which involves the usual resentments and an over-eagerness to swimming lessons… the irony is lost on no one). If you’re going to make a film about a young woman and her estranged dad getting trapped in a storm with a crew of vicious man-eating reptiles, it almost seems like a bit of a wild left turn to start exploring the psyche of the family; rather than reminiscing about the good old days, we’d really be expecting Dave to be focussing on saving himself and his offspring from being torn apart, or drowning. It certainly grounds the film in a realism that the premise just can’t get away with – for us to totally suspend disbelief in this world where a series of mishaps leads to Effy from Skins having to assault an alligator armed only with a single flare, we need to be fully embracing the ridiculous. This, coupled with a few unexplainable mysteries (why would these people, who have lived in Florida their whole lives, apparently not know the first thing about surviving a storm, for example) make for a bit of a disjointed storyline and a bit of a discord between the apparently serious script and the oh-so-cinematic villains.

The fact that, unlike say The Shallows or Jaws, Crawl is littered with multiple creature antagonists, actually serves to make things a bit more complicated, bogged down and less clear (though it’s also much more terrifying, of course). Rather than being hunted by one huge alligator, Haley and Dave are constantly batting away alligators that are apparently being drawn to this crawl space like flesh-eating moths to a flame. There are lots of twists and obstacles written into the story that make this a truly gut-wrenching drama right to the end; make no bones about it, viewers are put through the ringer.

Despite the abundance of hungry gators, there’s certainly an argument to say that Aja could have used a little more sick delight in the exposition; whereas in a B-movie version of this there would be absolute revelry in the gore and terror and blood and hunting, Crawl tends to play everything quite understated and serious, which makes it a little less fun. That said, there are a couple of lovely lingering shots and a particularly hair-raising scene involving some unfortunate looters that will stick in the memory.

Scodelario brings a determined steeliness to Haley, offering a hero we can unashamedly root for. Aja makes good use of the crawl space and finds frankly novel ways to extend and thoroughly exploit the terror of the characters and audience alike. There are some questionable choices, a bit of foggy narrative, and lots of jump-scares, gross-outs and all the other classic horror moves, though all in all the film bites off enough to chew. It’s ironically well-paced, and perfectly cut at 90 minutes – a brisk, no-funny-business, entertaining and pretty terrifying watch that’s the perfect respite from complicated and superhero-heavy summertime releases.