The Shallows, with 'gators 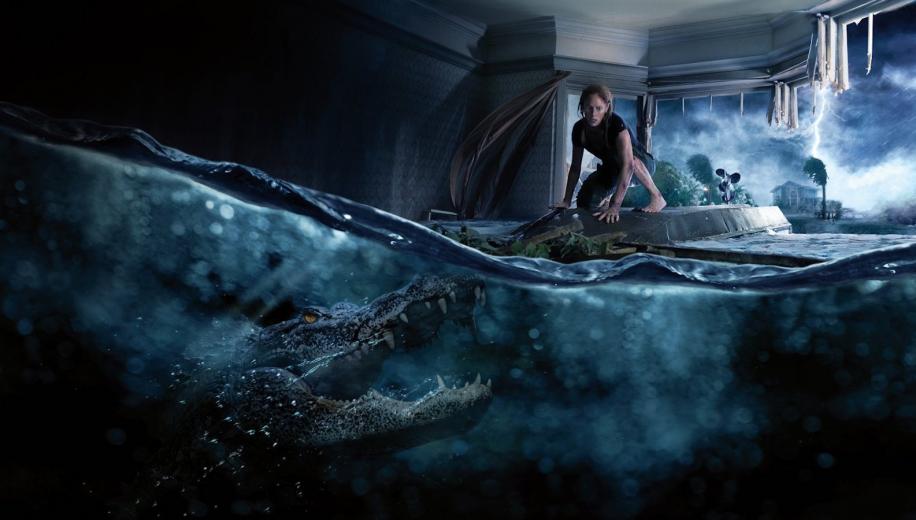 Taut and efficient, Crawl does for 'gators what The Shallows did for sharks, cranking up the tension and delivering a solid bit of 88 minute entertainment.

These days it's almost a blessing to have the opportunity to enjoy a decent movie that isn't desperate to top the seemingly mandatory 2 hour mark. Recently, Ready or Not delivered on that front, but it's still a relatively niche subgroup, within which Crawl fits perfectly. This latest endeavour from director Alexandre Aja is arguably his best since his 2003 horror Haute Tension, in no small part thanks to its sheer simplicity: Kaya "The Maze Runner" Scodelario's daughter goes looking for her dad, Barry Pepper (also recently in the 'Runner series), in the middle of a category 5 hurricane, and gets trapped in a flooded house with a bunch of alligators.

Aja takes this basic premise and concentrates on wringing the absolute maximum amount of tension that he can out of every single sequence, investing some basic but surprisingly effective backstory plotting for its father-daughter duo, which gives it a little more to chew on, before unleashing the alligators in what seems like an impossible situation to escape.


This latest endeavour from director Alexandre Aja is his best since his 2003 horror Haute Tension, in no small part thanks to its sheer simplicity

Scodelario does for Crawl what Blake Lively did for The Shallows, committing to the survival piece with gusto, and convincing as a tough and capable protagonist who is far from superhuman, but pleasantly also far from stupid. Pepper too is game for the task, and Aja isn't afraid of dialling up the jeopardy and visceral horror of it all - indeed within minutes of the attack you seriously won't know whether anybody is going to make it out of this alive - and whilst it's not chock with limp-chomping gore, there are some surprisingly painful moments to remind you that the film has some serious bite.

It's very much a B-movie, but it's a B-movie done just right, delivering a finely-tuned 88 minutes of thrilling entertainment.


Crawl comes to UK Blu-ray courtesy of Paramount, off the back of their likely identical US release from two months back, boasting a largely excellent 1080p/AVC-encoded High Definition video presentation framed in the movie's original theatrical aspect ratio of 2.39:1 widescreen.

Although it spends a great deal of its time in the crawl space beneath the house, bathed in darkness and shadows, Crawl's Blu-ray video presentation is more than up for the challenge, bringing forth superb shadow detail, inky blacks, and textured under-house passages. Skin texture, ports, beads of sweat and water, matted hair, and gory wounds are all finely observed, and the dank, weathered location allows for plenty of background texture, seeing the frame teeming with detail. The colour scheme is a little skewed through the location, but suits the atmosphere and style and, overall, it looks superb.

A tremendous track
Whilst, these days, it's always a shame when a meaty, atmospheric movie doesn't get some 3D object-based immersive audio treatment, every now and then a tremendous lossless HD track comes along which does such a fantastic job that - a few minutes into the movie - you completely forget that desire for an Atmos 'upgrade' and sit back to enjoy the tense experience in all its glory. Crawl's DTS-HD Master Audio 7.1 track is just that kind of audio track, promoting dialogue clearly and coherently throughout - from whispers to shouts - whilst keenly focussed as much on the silence, and tiny subtle sounds therein, as it is the more frantic attacks. It's the silence that helps the tension, creeping around waiting for the next attack and trying to stay off the radar.

Crawl enjoys an Alternate Opening - with intro - some Deleted Scenes, and a couple of background Featurettes, including one on the VFX

A very nice little survival thriller
Crawl doesn't aspire to greatness, but merely taut efficiency and damn-near relentless tension, and as a result it ends up a pretty great B-movie. Paramount's UK Blu-ray release marries up to its earlier US disc, with excellent video and audio and a few nice extras to boot, making it a must-have for fans and a keen recommendation for those who want a very nice little survival thriller.