Need for Speed it most certainly is not 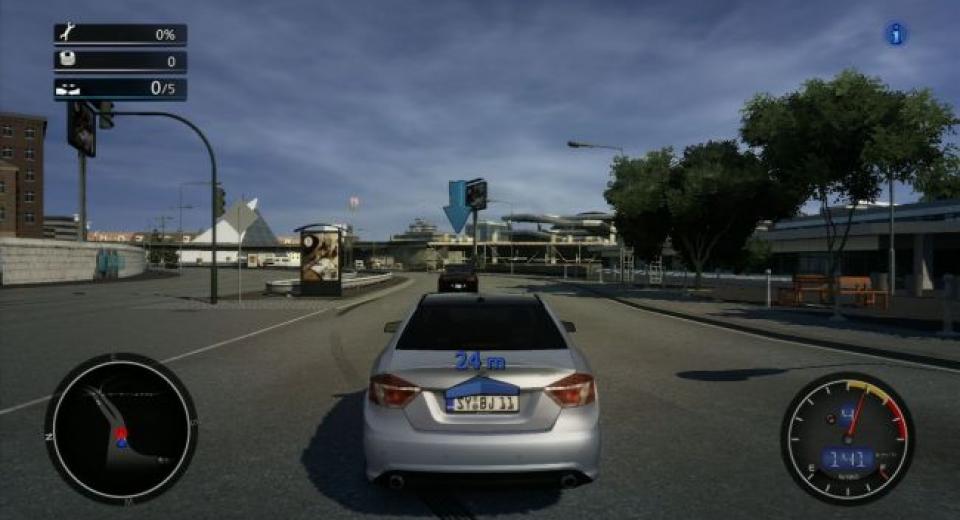 So here we are in 2012 right in the middle of what must be one of the worst years for releases for the summer. Granted it’s never great at this time of year but we usually get at least one good title to keep us going and this year hasn’t really provided us with that.

As expected, we see a slew of half-baked titles launch that would get forgotten in the midst of stronger franchises and IP’s if they were released at any other time. The problem being that there’s a reason for them releasing now; they’re not usually that good. Such a title that has released now is Crash Time 4: The Syndicate which offers up classic racing mayhem with a twist.

Courtesy of developer Synetic and publisher DTP Publishing, Crash Time 4 is an open-world racer that follows the adventures of two traffic cops who try to bring down an underground ‘syndicate’ running riot across the city. Being more than your average racer, the PR spiel for the title boasts ‘brutal, bone crunching physics’ along with ’40 high octane…fully destructible cars’. But is this just your average marketing person going wild after reading the latest Oxford English Dictionary, or does it deliver on its promises? For those of you who went with the former option then pat yourselves on the back because Crash Time 4 falls well short of what it promises to deliver. Firstly though let’s delve deeper into the story line which is extremely farfetched. As already mentioned you follow two traffic cops whose duty it is to charge around chasing down and detaining road-bound criminals who are part of a syndicate which is corrupting the whole city.

As expected, your line of duty sees you engaging in high-speed pursuits, completing tactical manoeuvres and for some extraordinary reason you also get to compete in races whilst on duty. Not only is this a possible explanation for tighter police budgets these days, but it is also a completely weird side activity. One minute you might be on the verge of busting some criminals, only to be tasked with flying round a forgettable circuit for a few minutes which breaks any sort of pacing and structure.

As traffic cops, you gain access to an increasingly expansive collection of cars which vary from the standard undercover saloon car to the insanely fast jumped-up racing hatchbacks. New cars are unlocked over time as you complete story missions, side quests and other miscellaneous actions but the standard police cars suffice most of the time. Manoeuvring the cars is surprisingly satisfying as they all respond in the way that you would expect them to with no signs of unnecessary under or over steer. This makes the task of taking out the bad guys very satisfying without frustrating you to the point of not caring whether or not you catch them. All cars seem to have been fitted with hyper-sensitive break discs and pads however as braking harshly at the last minute, regardless of speed, seems to get you safely round the upcoming corner or the bus full of school children.

With no licences for official cars, Crash Time 4 relies on its team’s creative edge in order to design and create a unique array of vehicles that will be required for different races and challenges. When I say creative it becomes quite clear that all vehicles within The Syndicate are very closely related to their real-life counterparts so much so that I’m sure some manufacturers would have a say on the matter.

Now for the small matter of the marketing spiel on the back of the box and used as part of the promotional campaign. I’m not one to be a party pooper on purpose, quite the opposite in fact, I’ll give any game a fair chance, but the physics are simply non-existent. You can bounce from one car to another like a manic pinball machine caught in a rubber room and your vehicle will have such little damage inflicted on it that you could flog it for ¾ of its retail price. Seriously, a head-on collision with a coach will often result in the coach bursting into flames with you driving off into the cityscape. The objects scattered around the city are similarly weak as they fold in on themselves because of the menacing draught left behind from your speeding vehicle. God help them if you actually drive over them.

The storyline is instantly forgettable whilst the dialogue to go along with the rubbish story is quite simply awful. It’s one of those games that thinks we all find guys who crack one liners and do their best macho voice every time they speak cool. Seriously fellas, we’re more mature than that.

It’s hard to pick a winner of what’s worse; the dialogue or the lack of structure throughout the entire game. Granted that it’s open world so there will be some element of choice as to what you go out and do but after each mission you are left flapping around in a weak set of menus. This would be fine if you had the slightest clue what you were doing but you’re left to your own devices to figure out what the hell is going on. You can see what Crash Time 4 was aiming for when the developers were sat around the discussion table; they wanted to replicate some of the success seen by the Need for Speed franchise. The thing is that the missions and tasks become far too boring far too quickly as they are all the same just in a different area of the city.

If the single-player frolics are far too much for you to handle in one go then you can turn to the multiplayer modes for your next fix but the problem is that the lobbies are inhabited by fluttering moths where players should be. In short, there is no bugger playing it.

Crash Time 4 is an example of what could be a cheap fix of a budget title but when it comes in at full retail price you can’t help but feel like you are being ripped off considering how little originality has been put into the game. Once it has quickly wormed its way into bargain bin, and it will, then I would recommend giving it a quick blast but for £30-40 stay well away. Your money is best spent elsewhere.

Crash Time 4 would make a perfect budget title if it were offered at the right price, but as it stands it falls well short of being worth a full retail price tag. The cheesy dialogue and poor story would be forgivable if the game actually did something unique or vaguely interesting. Initially Crash Time 4 seems like a fun little game until you realise that all the missions are pretty much the same just set in a different part of the city. The game looks like it was intended to run on a PS2 whilst the physics engine is non-existent, and if that isn't enough to persuade you not to play then I don't know what will.