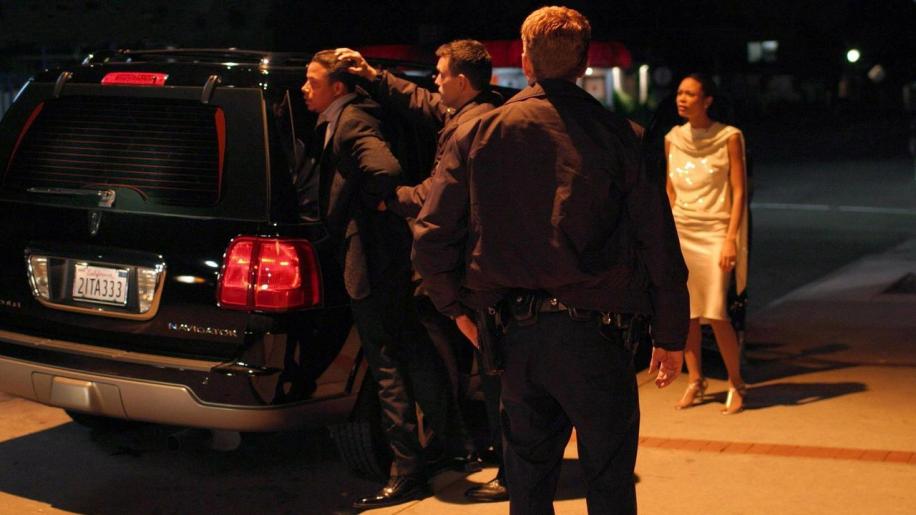 Presented in an anamorphic 2.35:1 ratio, Crash is certainly a fine looking film, albeit not perhaps as stupendous visually as one would hope from such a fresh release. There is ample grain present in many scenes from the film, although this is forgivable as it appears to have certainly been an artistic choice from Haggis to provide the film with more of pseudo-documentary realism in certain scenes. Perhaps the film's relatively low budget roots are exposed more in the digital domain as the picture, although certainly not soft, is perhaps not as sharp as one would expect from a new movie.

Colours certainly aren't always vivid, but again this appears to be directorial preference and as such they are presented accurately and faithfully. Blacks are reasonably solid, and night-time scenes are well rendered. There are occasional, if not drastic, elements of artifacing here and there, and occasionally edge enhancement encroaches a little more than may be comfortable when watching on a large screen, although I've certainly seen far worse examples from new films.

Overall this is a solid and pleasing transfer, if not quite the stellar performance we perhaps should expect from such a recent Oscar winning movie

Lions Gate's new release of Crash adds a DTS-ES 6.1 track to the previous edition's 5.1 and 2.0 mixes, and what a welcome edition it is. Although predominantly a character driven talkie, this 6.1 mix does a commendable job of achieving special surround, and sounds fantastic when it roars into life through an action sequence, or just through its wonderful handling of the atmospheric musical score. Dialogue is clear and precise, aural detail is high, and the subwoofer is called into action where possible. The 5.1 is a powerful and versatile track given the confines of the material and does its job well, although it's a clear second to the DTS in terms of clarity and fidelity.

Coming packed with an extra disc this time around, this new director's cut of Crash features a fresh and altogether more comprehensive selection of supplements than the relatively modest original release.

Disc one opens with a 'blink and you'll miss it' introduction from Paul Haggis which runs for a mighty seventeen seconds and consists of nothing but Haggis essentially saying “here is Crash”. A complete waste of time that beggars belief that someone actually bothered to set this up as an extra.

Thankfully things pick up with an audio commentary from Haggis, Don Cheadle and co-screenwriter Bobby Moresco. This isn't a vintage commentary by any means, but it's informative and contains a fine breadth of information from production anecdotes through to more serious social observations. It's perhaps a tad daunting for those not overly engaged by the feature, but it's still entertaining enough.

Rounding off disc one is a selection of trailers for other Lion's Gate material.

The bulk of the extras are to be found on disc two, which opens with 'Behind the Metal and Glass', which is a making-of featurette which, at just under half an hour in length, provides a more informative and engrossing time than your typical effort.

Following this we have 'On Paul Haggis' which is a five minute discussion with the director on how he came to get Crash onto the big screen. Although a few people appear to have issues with Haggis as an orator, I found this supplement to be an interesting, if a touch brief, appraisal of his movements within Hollywood.

Following this is 'LA: The Other Main Character' is a very interesting featurette which focuses on Los Angeles and includes contributions from both filmmakers and government workers to create a detailed look at the city in which the film is located.

'Unspoken' is yet another featurette, this time concerning the films treatment of race relation issues. Although I found the film's message a tad underwhelming, it's refreshing to see the actors involved talking eloquently and passionately about the thorny issues which influence the film.

Next up are the deleted scenes which total eight in all, seven of which contain commentary from Paul Haggis discussing why they were omitted from the final cut of the movie. The deleted scenes are a mixed bunch, some are barely altered from the final cut, whilst others are of some worth and could arguably have had a case for inclusion within the movie.

In terms of providing gritty realism and a hard-edged look at the racial conflicts of contemporary America, the film is somewhat of a fence-sitting letdown, lacking the courage of it's convictions to really go for the throat and masking it's lack of authority with an air of arthouse ambiguity. This aside, it's a marvellous film, beautifully staged and wonderfully acted by a superb cast. If you can look beyond it's somewhat preachy exterior, what you will find is a worthy Oscar winner.