"Maybe the next one." 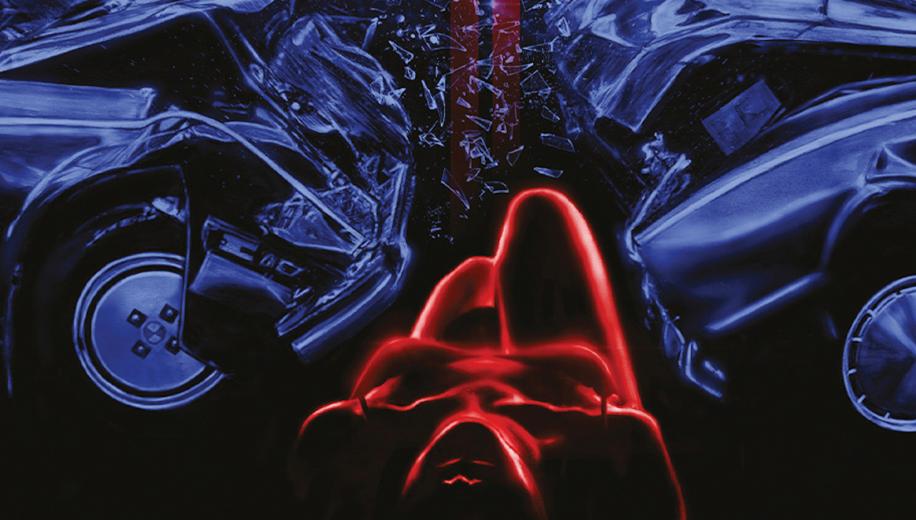 Crash was an unfilmable novel by author J.G. Ballard (whose works have only been adapted two other times - in Empire of the Sun and, more recently, Ben Wheatley's disappointing High Rise), blending themes of autassassinophilia (arousal at the risk of death to you or others) and symphorophilia (arousal from staging and watching a tragedy, like a car accident) into a tale of a mythical cult of car crash fetishists searching for the ultimate orgasm, likely only found in death. Even Ballard himself would struggle to remain consistent in how he categorised the work, at various times reflecting on it as a cautionary tale on obsessions that are impossible to satisfy, a psychopathic hymn, and a sci-fi.

Attracting the attention of David Cronenberg - who was either the apposite choice, or the most ironic choice to film a book which critiques the fetishising of violence and gore - the end result would be as controversial as the book, similarly resulting in a call to be banned in various territories. And the polarising reactions would go all the way up the chain to even the Cannes Film Festival, where Jury President Francis Ford Coppola reportedly refused to personally issue the award it won because he found the film so distasteful. The reality is that Crash isn't really all that shocking, particularly not for a Cronenberg film. In fact, in the context of his body horror classics, it's positively tame, presenting a fairly cold look at some messed-up individuals who are all, quite literally, heading for a car crash, and supposedly offering a Ballardian reflection on the human condition, and the direction humanity itself is heading in.

The purposefully named protagonist James Ballard (replacing the author's 'narrator' in the book) is in an open marriage where neither he nor his wife seem to be able to get their sexual fix from the affairs they keep having. The answer to their problems comes after Ballard has a car crash and meets cute with a member of a fetishist cult whose leader reenacts fatal celebrity car accidents for sexual arousal.

Crash is probably a whole lot of things to a whole lot of people. Misunderstood. Impossible to understand. Unpleasant. Sexy. Unpleasantly sexy. Graphic. Extreme. Cold. Distant. Impenetrable. Genius. Trash. It's also probably a bit of all these things, attempting some tangentially interesting introspection of the human condition by way of a subject-matter which is almost impossible to relate to and thus removes a large method by which most viewers would possibly understand any underlying messages.

It's hardly much of a cautionary tale, almost martyrising Elias Koteas (easily the star of the show, as he was in Malick's Thin Red Line and countless other gems he's stolen the limelight in) as the cult leader whose ultimate dream appears to be to die in a celebrity car crash reenactment. And Spader is his usual unpleasantly slick self, although he deserves credit for remaining plausible in the most implausible of positions with a succession of universally aloof femmes, including Deborah Kara Unger, Rosanna Arquette and Holly Hunter, all of whom showcase more flesh than characterisation. It's cold, clinical - whilst simultaneous greasy and grimy - and strangely reminiscent of Steve McQueen's Michael Fassbender sex addiction drama, Shame. Exquisitely constructed and meticulously shot, and innately commendable whilst being curiously empty, it's still a Cronenberg movie, and even his misses are still pretty damn good. Really, though, Cronenberg should have gone full Cronenberg on it, as whatever mixed messages Ballard was already obfuscating only get further lost in translation here, making for an equal parts oddly compelling and curiously pointless ride into oblivion.

Crash comes to 4K courtesy of Arrow, in the wake of their excellent work on Flash Gordon (US), Pitch Black, King of New York, Cinema Paradiso and, most recently, Tremors. Unsurprisingly then, this Ultra HD Blu-ray release boasts an outstanding native 4K rendition.

Arrow's UHD set is surely the definitive release of Crash

Crash gets the deluxe Arrow treatment in an admirable move that further highlights just how behind the times Criterion may be in not adopting 4K, as the boutique studio have just released their 4K-remastered Blu-ray in the US, for a comparable price tag to Arrow's UK 4K set. Founded on a brand new 4K restoration of the UK cut (i.e. the uncut NC-17 version, as there were no cuts made in the UK) taken from the original 35mm camera negative and supervised by Director David Cronenberg and his longterm Director of Photography Peter Suschitzky, Arrow's UHD set is surely the definitive release of Crash.

Detail is fantastic, but not at the expensive of a fine gauzy level of grain which pervades the piece and reassures you that the image has been given meticulous grain management with not a moment of excessive DNR implemented but, on the other hand, no troubling aberrant fluctuations to plague - in particular - darker moments with unruly, heavy grain and noise. Clearly lovingly restored, Crash's 4K presentation belies its relatively low budget, small scale production origins, handling the dour, at times grim visuals with clinical precision, and rendering some sublime imagery as a result. Skin textures, wound details, scarring, battered vehicles, leather interiors, clothing and hair all get perfect observation. Cronenberg loves his close-ups, and his body horror, and Arquette's character probably best represents this, with her purchase of a new car and subsequent sex scene the pinnacle of both, but the film is littered with exquisite framing and surprisingly beautiful shots in spite of the gritty, hard subject-matter.

Of course HDR and WCG lend more than a helping hand, with more room to play with in terms of the span between the rich, deep black levels and bright peak whites, affording some excellent misty, smoky night crash scenes which boast impressive shadow detail. One of the last night chase/crash scenes, with rain cascading down, has some wonderfully vibrant tones popping in it, and it's moments like this that remind you of the benefits afforded by HDR and WCG, which otherwise is relied upon to enhance the more reserved sombre palette of murky greys and browns with better depth and texturing. It will never be a demo piece - it's simply not that kind of movie - but it's a reference rendition nonetheless, maintaining Arrow's flawless 4K track record.

The 5.1 track does a very good job with what it has

Dialogue is rendered with reasonable clarity, notwithstanding the intentional mumbling design of some of the interstitial conversations, which often feel like vacant reflections that drift out of the characters' mouths rather than words spoken as a part of consciously engaged dialogue. Effects are clearly restricted by budget, period and design, and though a few of the crashes are punishing, they're still distinctly 90s in every fashion. Nonetheless the 5.1 track does a very good job with what it has, and particularly comes alive with Shore's score, which rounds out the proceedings very nicely indeed.
﻿

It looks like this is yet another Arrow release which drops the accompanying Blu-ray, but what a commendable stance for them to take - it was never needed but for the lazy studios who couldn't be bothered to port over the extras to the main 4K disc itself; in ditching the Blu-ray, Arrow have effectively taken the opposite stance and made it mandatory that your 4K disc is going to be your one-stop-shop for everything: film, commentaries, documentaries, everything. Finally, it appears we are edging towards being free of having to flip discs just to listen to a Commentary or check out some BTS.

Arrow have made it mandatory that your 4K disc is going to be your one-stop-shop for everything: film, commentaries, documentaries, short films, everything - it's outstanding

The extras are pretty damn impressive too, with a brand new Audio Commentary from a film scholar, and a quartet of brand new Interviews, with the likes of the Director of Photography and the Producer on hand, as well as the Composer and Casting Director. They afford some welcome background into the production, offering retrospective insight into Cronenberg's work. There's also a new look at the Canadian locations used, and a whole bunch of extras which were reportedly the cause of the title being pushed back a month in terms of release - the 2019 Q&A with Cronenberg and Viggo Mortensen, the 1996 Q&A with Cronenberg and Ballard, and the excellent Video Essay, Architect of Pain.

Perhaps the highlight of the disc is the inclusion of a few Cronenberg Short Films (2013's The Nest and 2007's At the Suicide of the Last Jew in the World in the Last Cinema in the World), as well as a number of previous, likely largely unseen, adaptations of Ballard's Crash, including the 1971 BBC short, Crash! - narrated by and starring Ballard himself - the 1986 short Nightmare Angel, and the 2016 short Always (crashing). Amidst these the dated 1971 BBC effort is perhaps the most striking curio, offering the most personal input from the author himself and likely thereby getting us closest to his source work.

Finally, in terms of archival material, we get a BTS Featurette as well as Interviews with all the key players - Cronenberg, Ballard, Koteas, Spader, Hunt and Unger. There are further trailers and the set is rounded out by some lavish packaging and a fold-out poster. It's outstanding.

Crash probably has plenty of ardent fans claiming there's misunderstood genius here, but even author Ballard himself struggled to nail what he was shooting for in his own source work, leaving body horror expert Cronenberg to interpret it however he hell he liked. And the end result is strangely skin deep, despite its suggestion otherwise, neither cautioning nor embracing the extreme alternate reality it barely skims the surface of. There are genius ideas here - the running theme that traffic is a living, breathing organism, and that the cars are 'gathering' or 'dissipating' in otherworldly cycles - but there's simply not enough Cronenberg craziness to make this classic Cronenberg. Still, even muted Cronenberg is pretty compelling.

Arrow's 4K Ultra HD Blu-ray release of Crash is a stellar effort which looks to not only blow all of the previous releases of this movie out of the water, but also best Criterion's recent Blu-ray edition, and will hopefully give that purveyor of fine Blu-ray releases just the nudge it needs to finally get in the 4K game. The native 4K video is excellent, the audio very good and the extras are utterly fantastic, and ported over to the 4K disc too. Fans should lap it up.