Somewhat later than planned, Microsoft's supercop sandbox sequel bounds onto the scene. But is the genre still holding out for a hero? 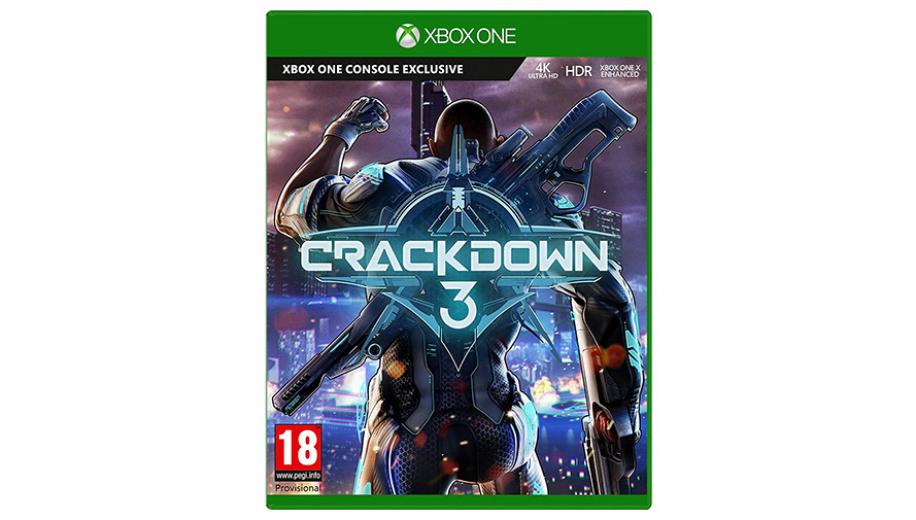 There's nothing wrong with games being silly. Heck, there have been some amazing games in the last decade alone that let players revel in their foolishness, from the B-movie schlock of Lollipop Chainsaw to the potty-mouthed pop culture pantomime that Saints Row used to be before it turned so daft it forgot its own name – and how to be good – with Agents Of Mayhem. The problem with such one-note games, though, is that they're exceptionally difficult to serialise successfully.

Crackdown has already proven this once already, with 2010's Crackdown 2 falling back on tepid zombie tropes in an effort to distinguish itself from its predecessor. But how do you top a game where you can already leap over buildings, toss cars half a mile, and take out entire gangs with the press of a button? Upping the stakes slightly to let players jump further or punch harder will only ever lead to diminishing returns (hello, Just Cause), so any such sequel needs to have some pretty clever tricks up its sleeve if it wants to stand out and avoid feeling stale.

If you bought into the pre-launch hype, Crackdown 3 appeared to have such a sleeved ace: the infinite power of the cloud. Microsoft was keen to talk up how the game would use cloud computing for physics calculations in order to deliver real-time destruction many times more realistic and impressive than what any modern console should be capable of on its own. But whether due to technical limitations or simple game design ones – you can't trust players to not blow up mission-critical locations hours before they're supposed to go there, after all – this tech now exists solely in the game's online multiplayer modes, where entire neighbourhoods can be reduced to rubble. So where does that leave the main campaign? Well, pretty much exactly where the first game left off in 2007.

It's business as usual for your muscle-bound Agent, who is tasked with cleaning up the streets of sandbox city New Providence by making a mess of the gangs who hold it to ransom. Your various attributes such as strength and agility improve as you use them until they reach superhuman levels and criminals tremble before your ability to jump over buildings, blow things up pretty much just by looking at them, and... drive quite well. It's exactly the same kind of superhero power fantasy fulfilment as in the original game, and that's fine so long as you take it for what it is – a time capsule from a simpler age of open-world silliness, and a game almost intentionally oblivious to the broader evolution of the genre around it. Crackdown 3's opening cutscene is utterly preposterous, yet it actually sets the tone for what follows surprisingly accurately. The game may as well be called Terry Crews Simulator 2019 – it makes full use of its popular frontman despite him getting melted in the first few minutes, with Crews' Commander Jaxon one of several playable characters thanks to respawning being made canon in this world. He (or whoever you pick instead) yells at everything from enemies to the concept of gravity as you leap and blast your way around New Providence, although the quips repeat so frequently that even the few that aren't terrible the first time get old really fast. Layered on top of this are equally tedious interjections from your Agency handlers, telling you to collect orbs you've already grabbed and repeating the original game's 'Skills For Kills' mantra every few minutes as if it's the smartest thing ever conceived.

Still, Jaxon is as close as the game gets to a good character (every single one of the bosses is a one-note pantomime villain, even the primary antagonist) and the odd line does raise a chuckle, but Crackdown 3 isn't about to let something so trivial as character development get in the way of letting players just muck about and ruin everything in their paths.

That apparently trumps all, even the need for a coherent narrative – what we get instead is a corrupt corporation to take down one bigwig at a time, and orders to do so because they are all evil and we are the good guys that solve all our problems by blowing them up. Being so devoid of substance isn't an issue in itself, but Crackdown 3 would need a much more impressive core gameplay loop if that is to be the chief focus of the game.

Blow things up pretty much just by looking at them

Instead, it's just another cookie-cutter open world game, and one that just feels old-fashioned in a genre that has seen things like the tight control and cinematic slickness of Spider-Man and the stunning world-building of Red Dead Redemption 2 in just the last 12 months, with many more impressive examples beyond that catchment window.

Control feels loose and often unpredictable, especially when attempting to clamber up tall structures – the game even needs to offer checkpoints during these sequences to make up for the fact that you'll sometimes not be able to grab a ledge or accurately make a jump and tumble hundreds of feet.

Conversely, most of the rest of the game is comically easy, and you're quickly geared and powered up to the point that any threat you may face in the open world is utterly trivial. It's empowering at first – especially when you cross that threshold – but the brainless one-shot goons just keep coming long after all their bosses are dead and encounters are just boring by that point, despite all the fun gadgets and weapons at your disposal.

The Skills For Kills system works well enough to begin with but as the on-screen values slow their increase to the point that collecting orbs and blowing up baddies doesn't cause them to budge by so much as 1%, it just doesn't feel rewarding at all. There's also the fact that one of the skills is Driving and that's utterly pointless in a game with such powerful mobility options and such sketchy vehicle handling – the latter point is odd given the studio's history of great racing games, although the fact that it insists on sticking Sonic The Hedgehog in cars does suggest that it has a bit of a knack for such thematic redundancy. The world itself is of decent size and pretty varied, the sci-fi aesthetic working well across towering skyscrapers, toxic craters and suburban slums alike. Graphically, Crackdown 3 is nothing special, but that stylised look means it at least holds up fairly well regardless, even though it doesn't strike us as technically demanding enough to justify the few performance hiccups we encountered. We expect to encounter a lot of repetition in open world games that are broader in scale and padded with filler content, but it feels much more egregious here due to Crackdown 3's brevity. You can comfortably do all the main story stuff and most optional content in around 12-15 hours, and that involves hacking through a lot of duplicate missions where the closest you get to variety is having to press two switches instead of one.

The game's structure of having to take down lower-tier bosses and work up the chain of command also falters due to the short nature of the game. You never really feel like you're actually chipping away at the evil organisation as it's all over too quickly, and to make matters worse, the boss battles themselves are universally awful and often quite similar – hope you like bullet sponge mechs.

The game seems to think just collecting junk in an open world didn't stop being fun for many of us at almost exactly the same time that Ubisoft littered Assassin's Creed 2 with pointless feathers to find, the hunt for Agility Orbs (as well as a staggering 250 Hidden Orbs) here passed off as endgame content in lieu of anything actually interesting or engaging to do.

When you get tired of leaping around tidying up collectibles, you might be tempted to go see what the destruction-laden Wrecking Crews multiplayer modes are all about, but we'll save you the trauma. Actually, scratch that – Crackdown 3's online component is so mind-blowingly awful that its horror needs to be witnessed first-hand to truly be appreciated, so consider that a twisted recommendation of sorts. It'll sure as hell make you appreciate any other online multiplayer mode a lot more, if nothing else.

All that talk of full destruction physics via complex cloud computation amounts to basically nothing, the lone map not even a city but a giant confusing sci-fi hamster cage. Sure you can blow chunks out of it and smash through surfaces, but it's just an utter mess to begin with and only gets worse as it falls apart, and never in a manner that is even remotely impressive. In either of the two modes – King Of The Hill and Team Deathmatch in all but names – Agent versus Agent combat is awful and the limited weapon and ability selection is weak and ill-conceived. Who thought letting everyone have homing missiles was a good idea?

Wrecking Crews is downloaded as a totally separate application, and the best thing about it is how embarrassed the main game seemingly is of it – you even get a warning message asking if you're sure when you try to launch it from the main menu of the game. As a game to just kick back with and turn your brain off for a few hours, Crackdown 3 is the gaming equivalent of fast food – quick, dirty, and not particularly satisfying in the long term. It's fine to just throw on of a lazy evening and turn your brain off for a bit, especially if you've got it for free as part of a Game Pass subscription, but it has neither the quality nor quantity of content to justify a full-price purchase.

It's a game out of time, one that plays like a B-tier open world game from last generation, not a key 2019 exclusive from a major platform holder. Fans of sandbox shenanigans have so many better options out there from the last decade that Crackdown 3 is impossible to recommend as anything more than a fire-and-forget Game Pass freebie to smash through in a few evenings if you're particularly bored.

Some might appreciate its shortness and simplicity, but we'd wager most will have been spoiled by the genre highlights of the last few years – Breath Of The Wild, Spider-Man, Red Dead 2 et al – and will just find Crackdown 3 to feel dated and starved of substance.