Proof that a sequel is not always better 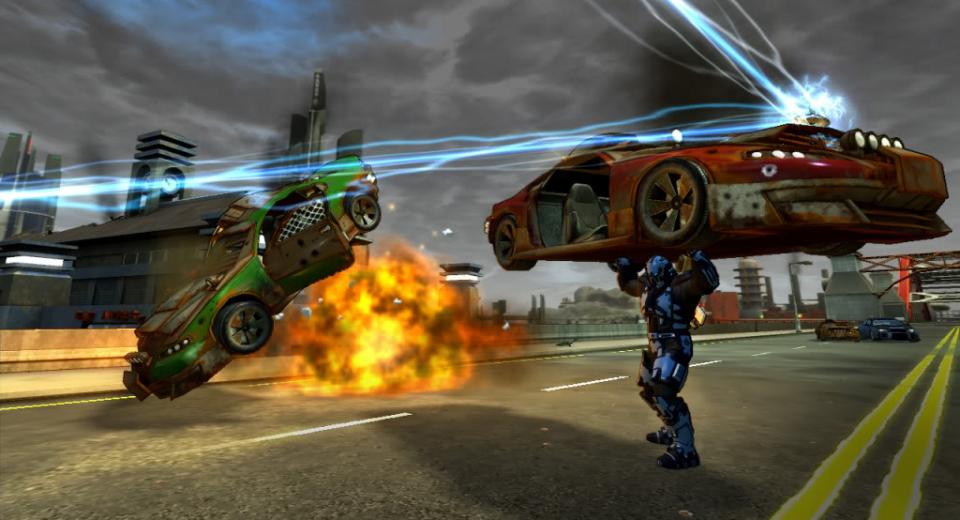 The original Crackdown. The unsung hero of the young days of the Xbox 360. From a small branch team of Microsoft, Realtime Worlds, it failed to spark many peoples imagination, but it still managed to sell enough copies in order for it to make it to the classics range, albeit due to Crackdown being surrogate to the Halo 3 beta. This of course would make any Halo fan boy pay for a game just to get their grubby mitts on said beta. Microsoft has a mixed past with regards to their games and their continuing successes, most obviously, the Halo franchise has been a huge success but even that is now fizzling out. Other releases like Too Human barely even made a dent on the gaming world, instantly finding themselves in the bargain bin.

As we all know, release dates are very unreliable at best with games, take a look at Gran Turismo 5, being constantly hampered by bugs and development issues. Crackdown 2 has seen similar postponements which for some, may well have put them off waiting. A delayed release however may not be such a trauma as Crackdown 2 could benefit from this later. Furthering the games push is the fact that Microsoft has seemingly been more willing to promote the sequel due to the surprising success of the first. This has been reflected through teaser trailers and screen-shots constantly being fed to the hungry consumer.

As said before, there were many who disliked Crackdown, which is understandable as it was not without its flaws. There were grumbles of repetition, moans and groans over the cel-shading and cries of woe over its unplayability in places. But this surely stands Ruffian in a good position to show off how it has corrected all these problems and also portray the overall class of the sequel. Over the past few years we have seen that a select few follow-ups were nothing more than glorified Downloadable Content (DLC), so will Crackdown 2 warrant a full retail price tag?

Obviously, being a sequel, this game appeals mainly to loyal returnees from the first iteration which signifies the refreshing reuse of the cel-shaded graphics. Undoubtedly, these have had a boost through a broader colour spectrum and sharpened edges and details. Explosions now have a deep shade of red and are complimented with bright yellows and oranges. Remember those cracks in the floor as you landed from launching off a building? Well they now look even better. Simple yes, but very effective.

Adding to Crackdown's over the top nature is the big sounds that come along with the vast array of weapons and vehicles at your disposal. Higher powered cars such as the Agency super car purr down the highway whilst the buggy or SUV will sound louder and give out more 'umph'. Rockets, grenades and shotguns too all go off with a loud bang and the sound is enough to make you feel the damage that they are packing. The machine guns however all sound a bit weedy and certain machine guns sound very familiar indeed, maybe from a certain big branded first person shooter from Activision?

The physics engine allows each player to basically mess around in Pacific City. Once your strength is high enough, you can fling objects about to knock down mindless Freaks, or mindless civilians for that matter. There does appear to be a downfall in the physics engine however as your enemies frequently take explosive damage from beneath or along side them, through a wall. Now this wouldn't be so bad should the wall come tumbling down from said explosion, but it doesn't, leaving you to wonder how exactly the bad guy received such damage?

Hand in hand with the updated graphics is the new story that surrounds Crackdown 2. You saved Pacific City first time around from underground crime and silenced all kingpins unlucky enough to cross your path. Well the Agency has brought about its own downfall this time around by tampering with the genes of the human race. Enter now the inevitable virus that stems from this very genetic engineering. As it spreads across the city, it mutates all citizens’ bodies it enters and soon the Freaks as they are called, outnumber human civilians. The agency then assume a lock down to contain said virus and they need new agents in order to combat the ever present threat from the Freaks.

The Freaks aren't your only worry though. An underground militant group, the Cell, have boycotted the Agency and established themselves as the last hope of humanity which the people, unsurprisingly, have taken a shine to. Complementing these differing enemies is the use of a nifty day/night cycle. The Cell's presence is strong throughout the day, whilst the Freaks emerge in their hoards at night, each leaving their main 'bases' susceptible to attack which is a great advantage as and when you initiate a takeover.

The play arena you get to roam is reminiscent of the original; large, varied and not to mention detailed, thus rendering it the perfect playground for all your fun and frolics. Much like the old game, you'll spend much of your time leaping from building to building with little care in the world for the main missions. One of these main distractions is, you guessed it, orb collecting. Remember the hours you spent trawling through Pacific City for those 500 agility orbs and hidden orbs? Well prepare to do it all again. Although this will be a chore, it will definitely enhance your characters performance as your statistics will be boosted through their collection. Keeping a nostalgic feel to everything, the old narrator/agency boss is still present who will tell you about everything, even achievements that you unlock, which can start to grind now again.

Obviously with a small RPG style element to the game, it would be expected that there would be a wealth of statistic screens. Well you would be correct, to a certain extent. You see although you can keep track of stats via these screens, you will never feel overwhelmed by them as all figures are displayed in a user-friendly manner, therefore making the game appealing to a varied audience.

There's no hiding the truth that the mechanics evident here are more or less exactly the same as they were before, following the 'if it ain't broke' theory, which for the most part is no major issue as the gameplay is solid enough. Character control feels as natural as controlling a modified super agent gets and is neither too easy nor too much of a chore. Along with a successful character model comes a vast quantity of weapons and vehicles that you are given to play with. Each are unlocked as you level up, whilst the Cell's guns can also be picked up and utilised too.

Each enemy also has their own 'Achilles heel' if you like, with the Cell taking heavy damage from regular guns and explosions, whilst the Freaks are weak against UV weapons and vice versa. Weapons also feel powerful from the off but once you get your hands on weapons orbs, they really do pack a punch. Enemies fly back as you scatter them with shotgun shells, and then fly even further as you lift them off their feet with the varied explosive weapons.

When your assailants get too close to blast off their feet, you can also show them what for with melee attacks. Again dependent on your progression level, each attack feels weighted to suit, so don't be surprised if you find enemies eating the sole of your boot, shortly followed by a back flip over the edge of a tall building.

As far as missions go, the general narrative follows a pattern of taking over Cell and Freak strongholds, whilst the early stages of the game sees you aligning absorption units scattered across the city. There are no real set linear missions or objectives here and this allows the player to complete them as and when they wish, much to the annoyance of the narrator who constantly reminds you of where you should be heading.

According to Ruffian, the aiming mechanic has been tweaked and improved from the original following mass complaints over it. This must be questioned as the auto-aim function will often tend to favour targeting a vehicle over the enemy stood next to it, thus leading to your agent ending up as a bullet sponge. And I'm sorry to say, that this is only one of many problems that can be encountered here. Although this will more than likely come with advancement in that area, the first time you come to drive a vehicle the controls do seem a bit light and the rear end tends to slide out of control.

Climbing in this type of game should be a joy, scaling new found heights then spontaneously leaping from them with little fear of the consequences. Although the overall climbing is a joy here, grabbing hold of the ledges can be a pain. You will see a window sill or ledge within your grasp, but will your agent grab onto it? Seven or eight times out of ten times yes he will, but when it's one of those time that he won't and you're halfway up a skyscraper, it's not pleasant.

Being a third person adventure/action game, Crackdown 2 will take around nine hours to complete the main 'missions' and quests but the most longevity will probably come from orb collecting and not to mention the new feature; co-operative mode.

Through this new much requested feature, groups of up to four can trawl through the single-player campaign and this opens up new kinds of mischief, be it completing the main missions or simply to rack up as many kills as possible while wreaking havoc upon Pacific City's citizens. Whilst not having experienced this feature myself, I have heard good things coming from those who have.

A recent addition to many games are awards and avatar unlocks that you attain through playing the game, extending appeal past achievements. These, along with regular achievements, are thrown at the player constantly, possibly as a way of keeping them hooked or 'inspired' so as to carry on playing.

Although Crackdown 2 is a nostalgia trip for those who loved the first game, it fails to do anything spectacularly new or revolutionary. As many may have feared, this is somewhat a glorified expansion pack or could be an add on for the original game. Yes it looks much better and yes it will be great fun all over again but you can't help but feel that Crackdown 2 is something of a let down.

Ruffian Games have developed a sequel to a rather successful 360 title with varying success and unfortunately for them the title has more negatives than positives. There are a few notable moments within Crackdown 2 as it looks much better than the original and the mechanics have remained mainly unchanged, allowing players to enjoy the game as much as the first. Despite this though it fails to live up to the hype and a repetitive mission structure along with an overpowering sense of familiarity keeps the game from being the hotly anticipated sequel it should have been.