It turns out, the only way to make a good live action anime is to be called Takeshi Miike 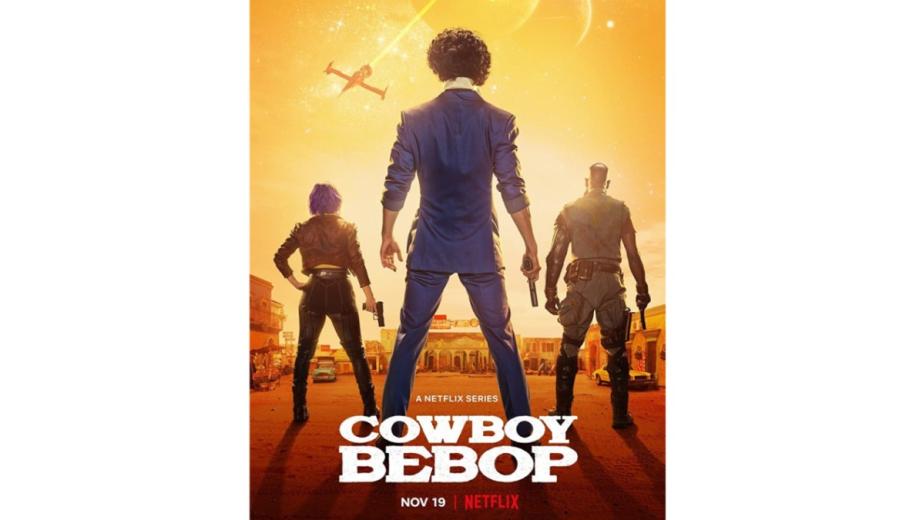 We all get old. And as we get old a few things tend to happen. We get a bit less cool, a bit flabbier maybe, start to look a bit rough around the edges. We start to reach for the things that made us feel good when we were younger, but ultimately we just have to put up with not being the same person we were when we were 20. That bit of wisdom seems to have escaped the live action remix of Cowboy Bebop, despite succumbing to all those tell-tale signs of just being a bit old.

Spike Spiegel is a bounty hunter living aboard the BeBop, a run down space cruiser piloted by his friend and new partner, Jet Black. One an ex-mob enforcer, the other an ex-cop, the two run down criminals in order to continue their meagre existence. That is until they get mixed up with a bounty involving the trafficking of super-drug “Red Eye,” controlled by Spike’s previous employer, The Syndicate. With the help of fellow bounty hunter and amnesiac, Faye Valentine, and E1N, a very unusual corgi, the team fumble from paycheck to paycheck just trying to avoid The Syndicate… and Spike’s old partner, Vicious.

On paper, all the ingredients for Christopher Yost’s live action reboot are right. The Seatbelts’ perfect soundtrack remains almost untouched with just a few additions by original songwriter Yoko Kanno; meticulous attention to detail has been paid to the production design, rendering the iconic ships into something that could believably exist in the real world; the irresistibly cool John Cho (Sulu in Abrams’ Star Trek movies) as a deadpan Spike is a perfect piece of casting (even if he is twenty years older than his character)… but somehow the whole is less than the sum of its parts.

Foregoing its predecessor’s sharp 22 minute runtime for a heftier one-hour slot, Cowboy Bebop feels like it's constantly floundering for immediacy, taking up too much time either with needless explanation or with strained jokes and quippy exchanges. What feels like it could and should be a breakneck romp through a retro future is slowed down to a snail’s pace as every little piece of nonsense is carefully contextualised, removing so much of the fun suggested by its premise.

To fans of the original, the series plays like a remix of plotlines and iconic moments, shuffled in a vain attempt to keep things fresh. If you’ve watched the 26 episode series and 2001 movie there’s plenty to recognise but is there enjoyment in simple recognition? In this particular case, the answer is “not really.” The novelty wears off extremely quickly and there’s a pretty speedy realisation that things have been reordered just simply to be different, not because of a grand plan to offer something new.

Obviously, this will mean nothing to those who never watched the original, but they will arguably have it even worse off as a series of shots, lines and plot points slow down the action to be given unnecessary focus in the name of fan service whilst serving the actual story not at all.

The opportunity arose to create a show which appeals to fans and newcomers alike. The premise is solid and the stylised craziness of live action anime has been shown to work before… once… maybe twice. But Cowboy Bebop is not nearly crazy or stylised enough to have its world and characters make sense. It’s not funny enough, not weird enough. It’s not the show promised by its effortlessly cool opening credits. The world isn’t realised in enough colour, not helped one iota by the fact that the soundstage work looks actively cheap, drab and small scale. A harsh irony for a show based on travelling between planets via stargates to catch criminals on the run.

... what’s good here is what was good in the original

Cho does his best to infuse Spike with his trademark devil-may-care deadpan sense of humour, and he manages to turn in a charming lead performance through it. Mustafa Shakir (Luke Cage, The Deuce) and Daniella Pineda (The Detour, Jurassic World: Fallen Kingdom) as Jet and Faye end up doing a sort of impression of their English anime dub counterparts, neither of them often looking particularly comfortable with it. Of the two, Shakir relaxes into his role more by the end of the ten-episode run but really, it’s all relative. Least enjoyable is the entirely menace-free Alex Hassell (The Boys) as the psychotic Vicious (a daft name that isn’t allowed to just be a daft name and, again, must be explained), creating a particularly weak lynchpin in the overarching story.

Some creative lighting work, excellent costuming and some smart story holdovers from the original series are the show’s highlights. But all that’s saying is that what’s good here is what was good in the original, and what’s new is what they’ve got wrong. We needed an all-out joyride through a wild interplanetary criminal plot and what we’ve got is a sort-of-fun, sort-of-odd plod through a sort-of-stylised world too focussed on explaining everything about everything. The Real Folk Blues this ain’t.

Cowboy Bebop is available to stream now on Netflix