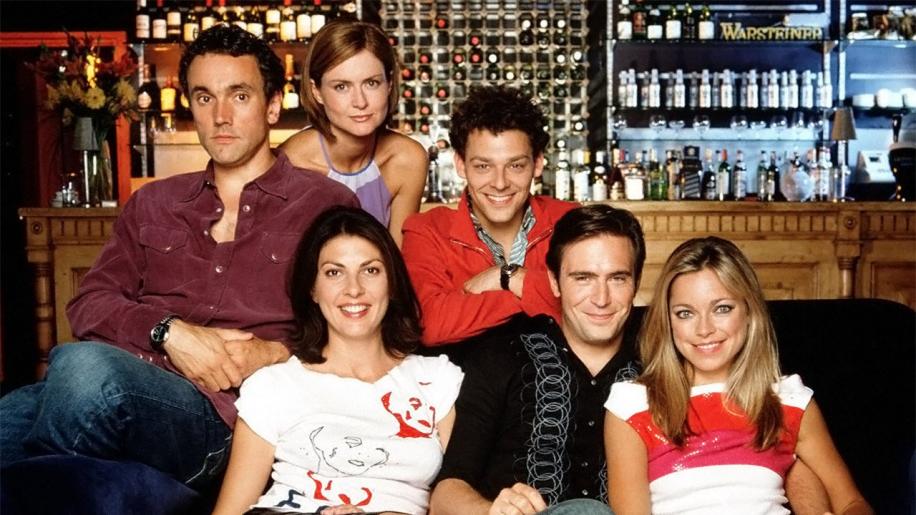 While this is a UK show, we're viewing the US boxset, so I have to say the picture isn't quite as sharp as the UK disks, having been converted from PAL to NTSC. There isn't anything wrong, it's just slightly softer than the R2 versions. Having said that, it's good to see season 3 split across 2 disks, rather than all on 1, as to be honest the R2 version was the weakest quality wise, having 3 ½ hours all on one disk.

Colours on this are bright and vibrant, from neon signs to bright clothing, they look superb and never look muted or faded. It's also worth noting that there wasn't any colour bleed and only the slightest of halos were present. No grain was noticeable on this set of disks, nor were any compression artefacts, which the season 3 R2 suffered from. Black levels were dark and fine for a TV release and I didn't notice any loss of detail, other than due to the slightly softer picture. Certainly nothing I can complain too loudly about and it shouldn't disappoint anyone else either. Being a BBC sitcom, we are treated to a standard stereo soundtrack, which is neither earth-shattering, nor will it ever be used for demonstration purposes, but it does its job perfectly well, with music and dialogue being solid and clear. Dialogue is never drowned out at all during the entire course of the four seasons and is clear at all times, especially important for a comedy as you'd miss the jokes obviously, so as said, while it's not anything exciting, it does exactly what it needs to. May I just say that the menus for the US version are infinitely better than the ones on the UK release - they move for starters and contain some of the more memorable jokes from the shows.

Season 1 contains behind the scenes interviews with the stars and writer, which runs for 20 minutes and they are quite interesting, not least because it's odd hearing Richard Coyle not sounding like a demented Welshman. The PhotoShoot runs for 3 minutes and is exactly what it says it is - a photo shoot of all the characters. We then have cast bios and trailers for BBC America, French & Saunders, Father Ted, The Blue Planet and Walking With Dinosaurs.

Season 2 contains audio commentary tracks for all the episodes, with the writer, executive producer Beryl Vertue and the cast. I haven't listened to all of them, but I plan to as they are interesting and amusing. We then have interviews with Moffat (the writer), Vertrue (executive producer) and Davenport (Steve in the show), which are filmed for the US disks and are moderately entertaining but once is enough. We again have the bios and trailers, this time for The Office, Robbie The Reindeer, Ab Fab, BBC Classic Comedies, Coupling Season 1 and BBC America.

Season 3 contains audio commentary tracks, in the same vein as the previous season - so my comments hold true there. We then have nearly 9 minutes of outtakes, although the menu says deleted scenes. The outtake with Jeff in the gimp mask is very funny, I must say. Next, a photo gallery which are behind the scenes-type photos, as opposed to stills from the show - different I suppose. Lastly the bios (yet again) and trailers for The Office Seasons 1 & 2, Classic Comedy, Coupling Seasons 1 & 2, Ab Fab season 4, MI-5 (Spooks), Bottom and BBC America.

Season 4 starts with a 44 minute “The Making of Coupling from Script to Scene”, which focuses on the season 4 making of, which elaborates on, as the title suggests, the script including tweaks, the rehearsals - which look great fun, through to the complete recording of the show. It delves into costumes design, set design and so forth; in fact it's more technical than most movie “making of'” featurettes. We then have 10 minutes of outtakes, which are typically of the flubbing lines variety and can be quite amusing. Next are nearly 9 minutes of deleted scenes, all in anamorphic widescreen and are amusing, mostly cut to running time I'd imagine. An interview with Richard Moylan does exactly what it says on the tin and runs for 8 minutes. For those unaware, Richard replaced Richard Coyle aka Jeff with the character of Oliver, the comic store owner. It's interesting actually, as there are some unusual questions. We finish off this season with the cast bios and trailers for The Office, MI-5 (Spooks), Bottom, Ab Fab and Men Behaving badly. Yes, I'm a little biased. This is to my taste, the funniest sit-com we've made for quite some time. Sure, I'm a fan of Red Dwarf and that's superb too, but this is so easy to identify with, even if some of the craziness that Jeff comes out with is surreal, we actually still identify with it and his complete lunacy - although I really can't see me doing the dance at the end of season 3. Ever. If you like Friends, get this. If you like risqué humour, get this. If you have never heard of this show, really you should get this. It's hysterically funny, but it's not for kids. If you don't believe me, explain to your children the male fascination with lesbian porn, as it is mentioned frequently in the show. If you'd rather not explain it, but see the potential for humour, especially explaining it at a dinner party, why are you not buying this show?