This is what happens when a 13 year old, having just finished watching Edge of Tomorrow for the first time, finds a shiny 50p and googles Bruce Willis' agent, knowing the guy says yes to ANYTHING. 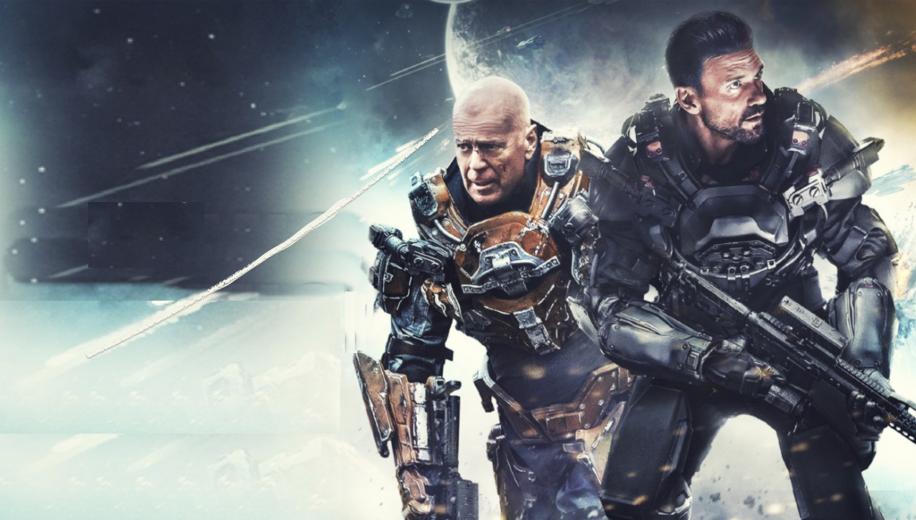 Intended as a very backhanded compliment, Cosmic Sin makes for a perfect companion-piece to Willis' Anti-Life, with both rather apt descriptors for the state of his career choices of late.

The production studios really missed a trick by not releasing Cosmic Sin before Anti-Life. Although they're neck and neck over which one is ultimately the better* movie (*substitute for any appropriate swear-inflected negative), Cosmic Sin has approximately ten times the budget of its forebear, even if that's more a reflection of just how little you can do with 5p rather than a comment on just how much you can do with 50p. The reality is that at least if somebody had the unfortunate luck to watch Cosmic Sin first, they might be fooled into thinking that Anti-Life was a similar production 'standard'. Even if they'd ultimately come to the conclusion that it was likely cobbled-together from B-roll footage from the Cosmic Sin shoot, at least they would have coughed up money for it. Instead, anybody who has seen Anti-Life will probably be even less likely to go near this turkey worrying - probably quite understandably - that it's just another messy bit of STV trash.

Hundreds of years into the future, as mankind has colonised the galaxy, first contact proves to be of the negative variety, forcing the military to make a plan of action to blow up everything in order to stop aliens from crossing portals and turning mankind into... wait, zombies? Hang on, didn't we have zombies in Anti-Life?

Cosmic Sin has lots of words at the beginning. In really basic fonts. Telling you about the future. It's like somebody was mid-way through The Expanse whilst 'writing' the script, although that version was passed to somebody else, who had more of an Edge of Tomorrow vibe in mind. With zero budget to actually show a single 'alien', instead we have to make do with people getting goth makeup and acting 'possessed', but the key in a movie like this is to keep changing things up with zero explanation, and, that way, the audience will spend most of its time utterly bewildered.

You know, throw a female wrestler in there - CJ "Lana" Perry - and give her yellow highlights and an oversized Barrett M82 which looks like it's made of foam, for kids. She'll distract away from the hapless girl at the beginning who appeared to be taking on an unseen alien with a Nerf gun. It's that kind of logic applied across the course of the movie.

Then there's Willis. He deserves some kudos. He takes the quintessential Seagal bar fight and turns it on its head. Forget the effortless use-your-opponent's-force-against-them grace of Aikido, Willis can take on a bar-room of people without even leaving his stool. Without even turning around. People just gravitate towards him and rest their heads on the bar, at which point he smacks them into said bar. Rinse and repeat.

To give him his due, he's 1000% more present than he was in Anti-Life, and there are genuine moments where it feels like he was handed a script and a character backstory which he actually, vaguely, wanted to bring to life. But he's nowhere near involved enough in the production to feel like the main player and it's another one of those generic DTV efforts where the background cast - when forced into the foreground - just seem utterly inept. Still, he doesn't commit the same Cosmic Sin as Frank Grillo, an underrated and enthusiastic actor who deserved far more than being (literally) jettisoned for vast swathes of the runtime.

Cosmic Sin is tolerable nonsense. It's inoffensive and very much an extremely low budget Edge of Tomorrow sequel with zero sense of humour. It's got ideas - Expanse-style interplanetary conflict, alien factions, some of whom mean us harm, possibly obfuscating the peaceful intentions of the rest, and seasoned warmongers with blood on their hands, which has cost them everything, including any connection to their loved ones back home. But giving these potentially weighty subjects the lightest lip service is just insulting.

If you close your eyes and imagine Anti-Life didn't exist, and that Willis was able to invest the couple of hours he put into that waste of existence into this movie instead, upping the budget fractionally too, and giving the production a little bit more finesse, you can imagine a halfway watchable piece of sci-fi schlock (hell the whole 'mind-melding' bit with Willis needs so much more explanation to get it across the finishing line). You still can't fathom why Willis and Grillo are even in this movie together (you'd have thought they would have learnt their lesson after teaming up for 2018's Reprisal), nor why anybody would green light this affair, but perhaps everybody had a very different film in mind when the sat down to act this puppy out.

What Grillo needs is for his upcoming, excellent (and, ironically, refreshing spin on Edge of Tomorrow's own forebear, Groundhog Day) Boss Level to gain him some credibility and traction to afford better roles. What Willis needs is to say no to ever doing a movie again until he's prepared to give it 100% which, from all the recent evidence, will unfortunately likely be never. A shame really because, as with Seagal and Under Siege 3, really he could have just gone out on a high with one last, gritty, back-to-basics Die Hard, but it appears to take a level of commitment that he's not prepared to give, instead content to sleepwalk through films like this. Ok, so maybe it's not quite the cosmic sin of a career choice that the title suggests, but it's not far off it.

Cosmic Sin is available to Rent or Buy on Digital from 1st March 2021.
﻿