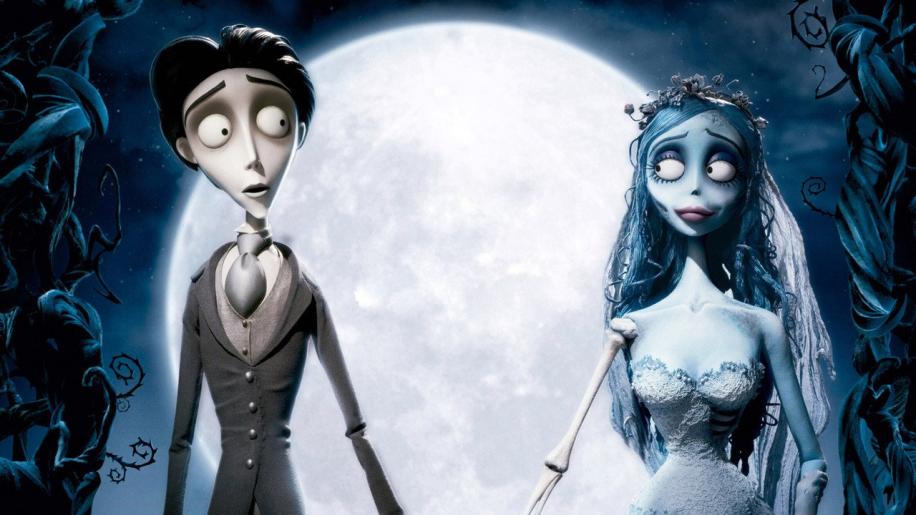 Corpse Bride is presented in a pleasing 1.85:1 aspect ratio anamorphically enhanced widescreen transfer that really allows it to come to life. The detail is generally excellent throughout, although admittedly there are some elements of inherent softness that are unavoidable given the material on offer. There is some light grain, from time to time, but it is largely negligible. The colour scheme varies wildly from the real world to the 'underworld', ironically painting the living as being near-death, with pale, lifeless people and cold, dark surroundings. At times it might as well have been done in monochrome, although when you step over into the world of the dead, the scheme livens up no end, with some fantastically vibrant representations. Overall the transfer has no defects and makes the production look pretty good. The main soundtrack is a solid Dolby Digital 5.1 EX track that pumps out most of the production through the frontal array. The dialogue is generally clear and coherent, although sometimes it differs significantly in volume levels when compared to the dominant score (by long-time Burton collaborator, Danny Elfman) that overwhelms some scenes. It is great that the music (and the tolerable musical numbers) is presented so well - and it does allow the surrounds to wake up a little - but it's a shame that it will sometimes force you to turn the volume up and down depending on whether or not you want to hear the murmuring and then survive the sonic onslaught of the score. Of course there are also some nice little effects, although they are again generally coming from the frontal spectrum. If you really like the score, you will be pleased to hear that there is also a music-only track option. The Inside the Two Worlds Featurette runs at four minutes in length and has far too much footage from the main film, with brief soundbites from the cast and crew explaining things that you would have largely understood already from watching the movie. I hate these kind of Featurettes, absolutely worthless, fluffy bits of nonsense that tend to add very little to your knowledge of the production.

Danny Elfman Interprets the Two Worlds is a five minute featurette on how the score to this movie was put together, with interviews from many of the main crew members, including Danny Elfman himself, talking about several key tunes and themes that he created specifically to tie in with the movie's narrative. We get some brief background footage of Burton and Elfman dealing with the orchestra in action and overall it is a nice featurette for those who want to know more about how the score was created.

There is a six minute featurette on the animators entitled The Animators: The Breath of Life, with clips of the crew making the puppets work and moving them around, whilst also explaining the benefits of stop-motion versus CGI. Again there are far too many clips from the final film, but there is a much more background information to glean from this featurette than some of the others. It also features brief contributions from Johnny Depp, Christopher Lee and Emily Watson.

Tim Burton: Dark vs. Light is a little under three minutes in length and looks at the director, Burton, with interviews from various cast members (including Christopher Lee and Albert Finney), talking about what they think of him. We hear about his style, his very specific ideas and his approach to the material, with Depp himself popping up briefly to praise him as an artist.

There is a featurette entitled Voices from the Underworld, which also runs at six minutes in length and looks at the casting of the various animated characters. We get to see many of these actors - of varying fame - actually recording the vocals in the studio, with Emily Watson, Christopher Lee and Tracey Ulman all to be seen doing the work, as well as contributions from Helena Bonham Carter, who explains the benefits of working on a project like this, Albert Finney being instructed on how to do his lines and Joanna Lumley discussing her character. Fans will be happy to hear that even Johnny Depps pops up briefly to talk about his experience of voice acting.

Making Puppets Tick is a six-minute Featurette where the Director Mike Johnson and some of his crew members discuss the puppets, how they were created - sculpted, painted and dressed up in specific costumes. They talk about how Tim Burton himself came up with and subsequently authorised the designs and he pops up briefly to discuss his own input and we even get a brief self-depreciatingly funny line from Johnny Depp himself. This is quite an interesting featurette, especially since they are right in how they describe the fact that each character is given its own personality through the specific design work of the puppets. It is amazing just how many expressions they can give these tiny puppets through complex mechanics and control work.

The Voices Behind the Voice Featurette is over seven minutes long and takes an even more detailed look at the vocal contributions for this production, this time allowing you a split-screen view of the animation with the voice actors in studio performing their roles into the microphone. It is quite funny to see how they adopt particular physical stances when performing (like Depp and Emily Watson both acting very coyly whilst doing their lines and Christopher Lee waving his hand around like a real priest). This is an interesting addition, with no fluffy interludes, just a collection of key scenes offering you a brief look at most of the key voice cast performing their art.

The Corpse Bride Pre-Production Galleries run as a slideshow that lasts some fourteen minutes and has various models and animations, along with stills from the production, showcasing how the characters and ideas evolved.

There is also a Theatrical Trailer that runs at a little under two minutes and has irritating voice-over man talking in his typically gravely voice (although, rather strangely, in rhyming narrative) in a desperate bid to sell a movie that largely speaks for itself. Corpse Bride is another wonderful vision from the imaginative auteur, Tim Burton. Telling a fairytale romance with a typically dark edge, fans of The Nightmare Before Christmas will almost certainly be overjoyed by this new production. The video and audio representation are reasonable (although the EX track is a little disappointing) and there are a fair few nice extras to round off the disc, although a commentary track would have been even better. If you've got The Nightmare Before Christmas, then this would sit well right beside it in your collection and if you haven't seen this kind of movie before then I highly recommend a rental to see what you think.