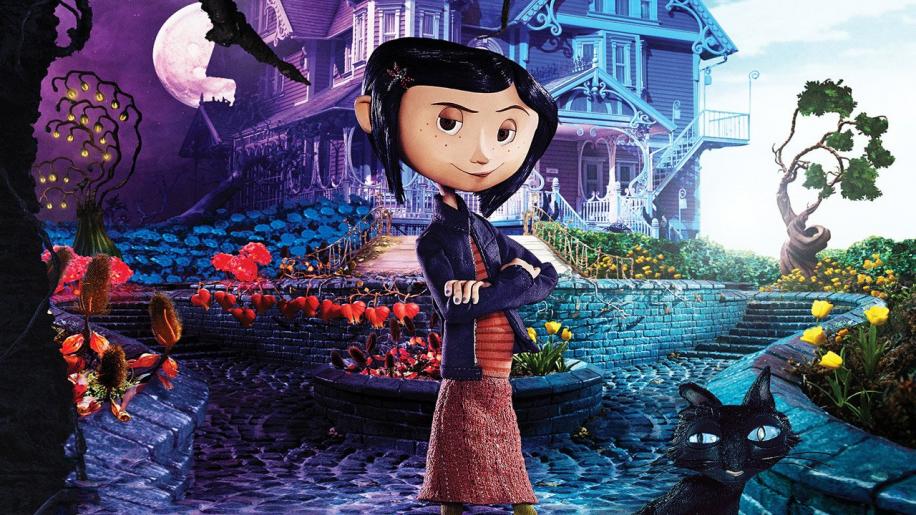 It must be me. But, I've never managed to warm to A Nightmare Before Christmas. Yes it has that strange ghoulish charm, is relatively spooky and is based on an equally nasty premise. But its execution just does nothing for me and I can’t really put my finger on to why, it’s not the stop motion, perhaps it’s the inclusion of one too many songs. I dunno. So when it came to tonight’s feature, I was a little apprehensive, but, as it turns out, I needn’t have worried, there is no sign of Burton’s hand, this is pure Henry Selick. The film is based on the book of the same name by Neil ‘Stardust’ Gaiman, and, typical of his writing, is full of wonder and danger, with an unerring sense of the sinister that excites children so much. The supernatural element is, however, far darker than one first imagines, with a rather nasty subtext, even if the warning message is clear, and, as a parent, it hit home on many levels.

Coraline is a young, spunky girl, with a strong sense of adventure and independence, but she is, somewhat, starved of attention and rather lonely due to the fact that her parents have moved to a new area and leave her to her own devices, lost as they are, somewhat prophetically, in their own world. In an attempt at alleviating boredom, Coraline discovers a small door and begs her mother to open it, only to find it bricked up. Yet later that night, a mouse leads her back to it, whereupon she discovers a strange tunnel leading to an exact replica of her house, complete with ‘other mother’ and ‘other father’, where everything is what she wants; good food, attention, fun and colour, the only peculiarity is everyone has buttons for eyes. Things, however, are never what they seem, and very soon there is a sinister turn of events with everything beginning to, quite literally, unravel ...

Gaiman’s penance for writing ‘other worldly fantasy’ is certainly nothing new, Lovecraft and Barker spent years exploring the darker dimensions that impinge on our own world, normally to the detriment of those that find them. Whereas there is definitely something sinister and dark about his ‘other’ worlds, there usually isn’t anything directly malevolent when compared to his illustrious inspiration. That, however, is very different with Coraline, whose ‘other’ world was spun with only one intent; to capture and devour. There is little of the ‘boo-hiss’ villainy here, and it is distinctly unsavoury when such evil masquerades itself behind a veil of sweetness and love, especially knowing that is how the real predators work. The ‘don’t trust strangers baring gifts’ motif is plain for all to see, but, thankfully, it never becomes preachy or overbearing, due, in large part, to how the characters interact, yes there are verbal warnings, but they are never laboured and there is no false, or schmaltz, ending.

Naturally the character of Coraline takes centre stage and has to appeal to the cinema going audience, therefore the voice acting talent chosen had to imbue her with that confident attitude, yet still remain tender and identifiable. The role fell to Dakota Fanning, just fourteen at the time of recording her lines, but already an accomplished actress with spectacular turns in Man on Fire (2004) and War of the Worlds (2005) to name but two. It is clear that the voice is still young, and needed to be so, there is that childlike wonder and incessant chatter, whether it is chastising Wybie, impinging on her parent’s time or steeling against 'other mother', and she shows, once again, a talent that is far beyond her years. Combining that with the distinctive look given to the puppet you have a very endearing character.

Ex-Lois Lane, Teri Hatcher, supplies the talent for 'mother' and 'other mother', channelling her own maternal instincts for the harassed, hardworking but loving mother and mixes Susan Delfino with deeper scheming and malevolence for 'other mother' – and there are real differences even in the same voice. This added with the animation of the puppet, especially the changing costumes to express the far more buggy aspect of other mother, you have a very sinister character. And I haven’t even mentioned the mid-form Michael Jacksonesque visage that is quite haunting (anyone else thinks it’s strange that now he’s dead he is being hailed as a king, when only a few short years ago he was being reviled as a devil?) Father and 'other father' are voiced by John Hodgman who has one of those smooth, warm and trusting voices. This is necessary for when other father is being forced to commit the attacks, he is still full of the sympathy needed to express the concern for Coraline, yes the outer body may be a bloated vision of horror, but that voice still wins our hearts.

Then we come to the cat, a being able to exist in both the real and the other world, to come and go as it likes, but you never really know its motivations – cats are like that. Voiced by the wonderful Keith David who manages to inject a silky menace and even when he can’t talk, you can still understand what he is trying to say. Wybie, a character invented purely for the film and voiced by Robert Bailey Jr. manages to supply a deal of sympathy for what is essentially just an expositional character, although his presence in the other world, I felt, was far more sensitive – something about the mime I guess. Our own Ian McShane, Jennifer Saunders and Dawn French make up the rest of the eclectic tenants and their respective other selves, whose warnings go unheeded but whose help remains invaluable.

The final ‘character’ I want to mention is Bruno Coulais’ score, which by its very nature is as intimate as the story. Starting off with plenty of whimsy and choral singing, yet retaining an element of menace and gradually becoming more and more sinister as the movie progresses to its ultimate showdown. His contribution cannot be understated, such is the effect of his music, try watching any sequence of the film without it, it simply does not work; it is a powerful and moving score and adds a further dimension to the action happening on screen.

Gaiman’s story certainly isn't new, it draws heavily from past literature, not least Carroll’s Alice, or any number of ‘beware of strangers’ fiction, but since this tale was spun for his daughter, this can be forgiven. It is Selick’s interpretation of the source novel, though, that really bring this story to life, being developed before the book was even finished both writer and director were intimately involved in bringing the story to the screen, changing what was needed to better express the intent for a visual medium. The result is an enchanting story with a moral message wrapped up in a true horror film. And make no mistake this is a horror film. And I have no shame in admitting that this surprised me on my first viewing, and was a little disconcerting, in what I originally perceived to be a kids film. Yes it is aimed at kids, and they will love the colours the moral and the evil hidden within, but looking through an adults eyes this is something deeper, something more malevolent and deeply horrifying. And you know what. It’s a great film too. Recommended.