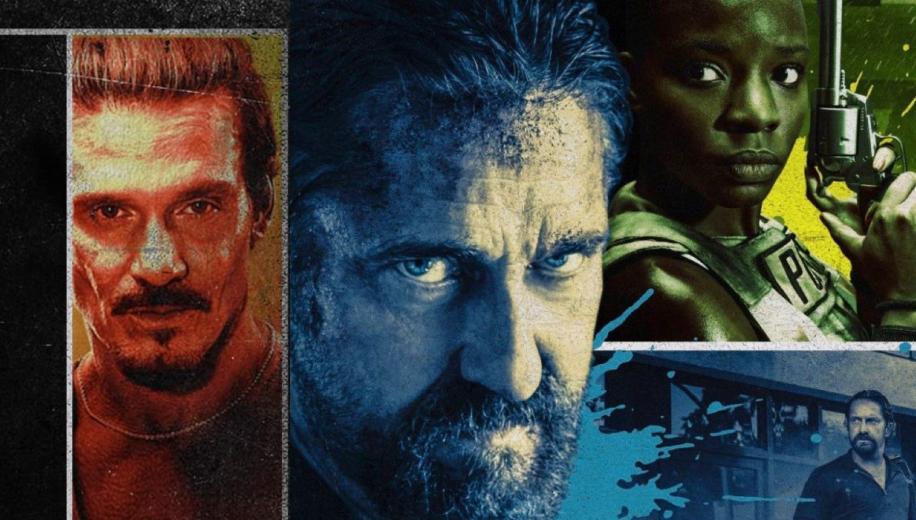 Joe Carnahan follows up his fun Frank Grillo live-die-repeat sci-fi actioner Boss Level with something more like Assault on Precinct 13 by way of Smokin' Aces, reteaming with Grillo and adding a scenery chewing Gerard Butler into the mix.

Carnahan hit the mainstream almost right off the bat. His one-two punch of Narc and Smokin' Aces was so disparately effective that he landed a Big Budget A-Team adaptation, for ten times' the budget he was used to working with. It was the last time he played in the big leagues, winning back critics with a (now-rare) Liam Neeson gem, The Grey, but otherwise only doing the little-seen action comedy Stretch, which went straight-to-oblivion, before taking a surprisingly long hiatus. It's been a decade since his last theatrically released film, with 2021 affording two (well, kind of, if we count Boss Level, which was due for release in 2019), and both a pretty damn enjoyable.

Copshop's limited theatrical run and almost immediate translation to a digital rental shouldn't put people off - it's a spunky little number, a little flabby if we're being picky, but a nice return to kind-of Smokin' Aces form, albeit without the manic editing and dozen-character-POV. It's a small scale affair, and arguably very safe territory for Carnahan (not a million miles away from Ritchie's Wrath of Man), but it enjoys a quartet of fun core performances and some typically colourful characters, as well as a decent amount of stand-off action mayhem. Oh and it's heavily influenced by 70s jazz-funk, earning an extra point just for playing out Lalo Schifrin's classic Dirty Harry theme to Magnum Force over its opening credits.

When mouthy crook Teddy Muretto purposefully lands himself a night in jail, he figures he'll be safe. That is, until a certain Bob Viddick arrives under a DUI, locked in the cell opposite him. As the two face off, ex-military rookie cop Valerie Young smells something wrong about the situation, all too quickly finding the entire precinct under threat from without and from within.

Copshop is unpretentiously confident pulp crime entertainment, with Butler and Grillo having an absolute blast as two colourful criminals at the heart of the tale, and upcomer Alexis Louder threatening to steal the show as the perhaps surprisingly resourceful John McClane of the scenario. Indeed, Carnahan absolutely nails his quirky bunch of characters, throwing in a terrific turn from Toby Huss (Apple TV+'s Dickinson) as a wonderfully theatrical psycho hitman who single-handedly generates the most laughs.

Reportedly the director's returning leading man - Boss Level's Frank Grillo - has been quite vocal about the edits done to reduce the prominence and dynamic of his supporting character, perhaps hoping that these two films would have had more of an impact on his career, and frustrated that one was delayed then put out on streaming, and the other has been moderated to perhaps downplay his really quite integral role. Fingers crossed the upcoming biopic on Ferruccio Lamborghini will be the lead Grillo flick everybody - especially him - has been waiting for, but he's still good fun in Copshop, although Butler does chew scenery much better, enjoying letting his mischievously dangerous side shine in a role closer to Den of Thieves than Greenland or the Fallen trilogy.

Copshop slow-burns its building threat, and could have possibly lost a few minutes at the start of the second act - trimming it down to a lean 90 minutes would have done no harm - but it's got plenty of refreshing quirkiness to it, the humour works, the characters are fun, and the action is great. Hardly hitting a total Assault on Precinct siege scale in its finale, it still delivers on tension - and stand-offs - and has more than enough attitude to make up for its shortcomings, and a decent soundtrack to boot.

Planning to reunite with Grillo again for his next project - a Mel Gibson crime pairing - it would be surprising not to see Grillo joining his go-to director for the long-gestating US remake of The Raid, which may well be the kind of film to land them both back in the big leagues. It could be a blessing and a curse though, as nobody really needs a remake of The Raid, and nobody would complain if either of them continued a run of films at this level - with Boss Level and now Copshop both pleasant surprise gems for 2021.

Copshop is out now in UK Cinemas and is available from 15th October to Rent on Digital in 4K HDR.