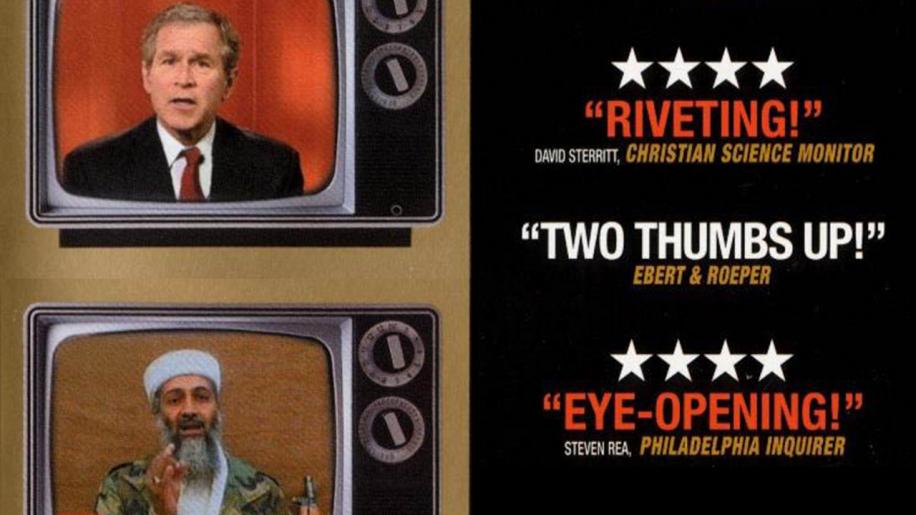 So good old Georgie Bush has been re-elected for another four years of moderate and unifying leadership. Flushed with the success of his sterling efforts in Iraq he is probably feeling pretty good with himself, ready to face new challenges like tearing up Alaska looking for oil. Meanwhile Iraq continues to flounder from one disaster to another, each incident reported, we hope, with dignity and impartiality. We, however, only really receive exposure from western news groups. From the pre-war ultimatum demanding the ruling Hussein regime leave Iraq to the toppling of Saddam's statue, Control Room unflinchingly shows the latest Iraq war from the viewpoint of the Middle East's main independent news agency Al Jazeera. Control Room analyses the effect media has on it's targeted audience and how the same information is read differently from one audience to another. Sounds dry as sticks, but this is a cracking piece of filmmaking.

This review is a little late. This is because I have written this rather long review five times or so, and to be honest, I am still not sure if it is right. Problem is that I have some seriously strong views on this topic and most of them are on the extreme side of moderate. The first few times I wrote the review, I asked myself: Have I moderated what I think, or watered down certain aspects of the movie? Am I being biased or is a balanced opinion being offered? It is curious that these questions I have asked myself of my review are also some of the questions Control Room puts forward with regard to Al Jazeera. To paraphrase one Al Jazeera representative, while indicating some pictures of dead bodies on his news network, “this is true reporting, this is what we see.”

What we see in Control Room is one of the most effective documentaries I have ever seen. I get the impression that none of Control Room's content is unnecessarily tweaked to give a slanted view of events. Samir Khader, AL Jazeera Senior Producer, clearly states Al Jazeera's mission statement: “To educate the Arab masses on something called democracy - respect of the “other” opinion. The free debate, very free debate, no taboos... Everything should be dealt with intelligently and with openness and to try, with all these things, to shake up these ridged [Arab] societies...tell them there is a world around you - wake up!” With these freethinking ideals, Al Jazeera was banned from several Arab states, only to become the most popular Arab channel with over 40 million viewers during the conflict. One of the first scenes has an Al Jazeera reporter, Hassan Ibrahim, sitting in a Quatar coffee shop talking about the impending war to some friends. These are not people worried about Saddam's harsh rule, but what the American and British forces are going to do and why. In other words, they are more afraid of western troops then the oppressive Iraqi leadership. This point is bleakly made as the first strike is launched in an effort to kill Saddam before the war even starts. In the aftermath, there are Iraqi bodies everywhere, pictures of which Al Jazeera show in all their gory aspect - remember “No taboos.” Hassan Ibrahim sagely prophesises that the “Americans will complain we are spreading anti-western sentiment. Well, sorry, you can't have your cake and eat it. You are the most powerful nation, can crush and defeat everyone, I agree. But don't expect us to enjoy it.”

This small part of the movie reflects the whole war effort and is a recurring theme in Control Room. Of course, images can be presented in certain ways and those images can benefit one side more than the other. However, it is the manipulation of such information, the spin that is applied to benefit one side or the other, that is detailed so well in Control Room. This point is presented by choosing Al Jazeera's broadcasting of a montage depicting American warplanes and armed forces interspersed with wounded Iraqi civilians. Is this crude anti-western propaganda or a pro Saddam rallying message? After all, either viewpoint has been used by the coalition and Saddam respectively in this war. The reality is that neither of those options is right: the montage was made to demonstrate the human cost of any war.

The human cost of the Iraqi conflict is re-visited several times, most poignantly regarding the death of an Al Jazeera journalist when American forces opened fire on the news agencies offices. Clearly a tragic decision was made, be it a political one or a military one and that decision cost the life of a man. The loss of life is more sternly shown to us in this documentary than anything I have seen on the BBC during the conflict (heaven knows what would have happened to the BBC otherwise!). One American spokesman speaks of how he felt ashamed when he saw pictures of dead Iraqis and felt little, but when Al Jazeera shows dead Americans, he felt grief more strongly than before: He is a soldier and so were some of the dead Iraqis, so why shouldn't he feel an equal amount of grief for Iraqis than Americans? After all, who does a coalition soldier have most in common with - President Bush making cloying moral raising speeches on an aircraft carrier somewhere, or an Iraqi soldier doing a job hoping to get home sometime to his family? Control Room poses much more than just these questions and you will be thinking about all of them well after the documentary has ended.