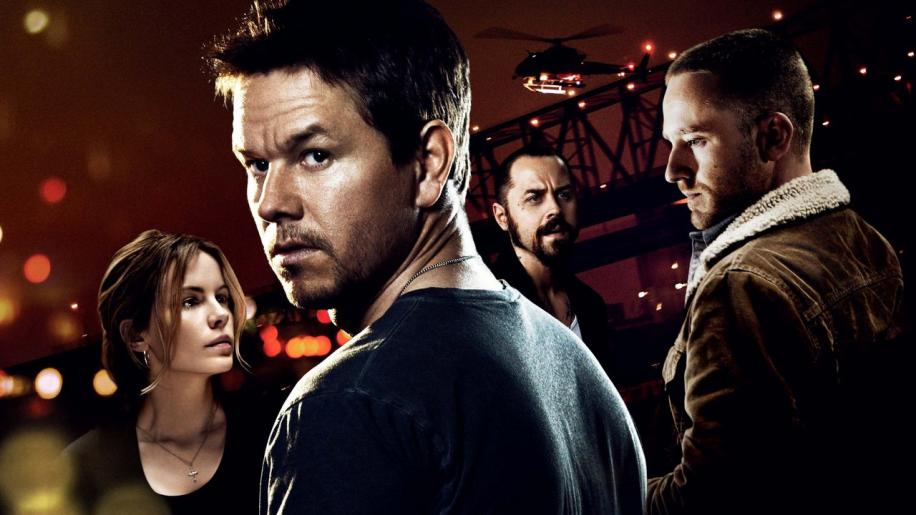 There’s nothing wrong with Contraband, per se – it’s not a bad film. Fairly taut and tightly-plotted, packed with tense, suspenseful sequences, and peppered with a few nice action beats, it often feels like a grittier, meaner big brother to 2003’s Italian Job remake, in no small part because here we once again find loveable everyman rogue hero Mark Wahlberg leading a team of mismatched miscreants on an impossible heist job, with a view to out-manoeuvring a dastardly villain. Ditch the minis, change the setting; up the violence and swear-quota to push this into definitive adult territory, et voila!

The trouble is that after his scene-stealing, Oscar-nominated turn in The Departed and his Golden Globe-nominated lead in The Fighter, audiences expected more from his next project; more than just returning to Remake City to star in yet another product of the cynical Hollywood money-making machine, this time an adaptation of the 2008 Icelandic film Reykjavik-Rotterdam – a film which already struggled under the weight of its convoluted plot, but which somehow worked through its low budget, comparatively small-scale setting. Up the ante to suit Hollywood sensibilities and, all of a sudden, you find yourself watching a wildly implausible tale further strewn with a litany of genre tropes and hackneyed clichés.

It’s not quite switch-your-brain off material, but it certainly warrants a keen ability to suspend disbelief.

Chris Farraday was once a notoriously good professional smuggler; so good, in fact, that dealers from all around still try and seduce him back into the life. But he’s got a family now, and a new job – doing security installations. His notoriety has not, however, gone unnoticed, and when his wife’s younger brother takes it upon himself to get into the smuggling business – and things go wrong – Chris is compelled to make things right. He has two weeks to raise $700,000 to pay off the debt, otherwise ruthless gangster Tim Briggs will not only come after his brother-in-law, but also Chris and his family. With so many lives close to him on the line, Chris enlists the help of his best friend and some of his old smuggling colleagues to pull off one last job.

The “one last job” element appears to be the backbone to almost every average entry in the crime thriller genre, and it’s just one of many ideas that feel tired and old about this piece. Unlike many of the recent remakes that I have criticised for effectively raping the original, unusual source material (I’m looking at you, Fincher, for your slick-but-unnecessary Dragon Tattoo remake, or at the recent Let Me In), Contraband attempts to adapt what was already fairly familiar, clichéd plotting. As stated, the Reykjavik-Rotterdam concept largely felt different because of the unusual setting; the low budget foreign flavour injecting a hint of life into what was, essentially, a fairly tried-and-tested routine thriller narrative. When thrown into the Hollywood mainstream, the story has a hard time keeping its head above the water; distinguishing itself from the crowd, and has to instead rely on a series of solid but largely unexceptional performances in character moulds that are almost as clichéd as the plot itself.

Mark Wahlberg (We Own the Night, Four Brothers, The Other Guys) leads the cast, playing it extremely safe in a role that relies on little more than a few charming smiles, a couple of menacing looks, some minor fisticuffs and a fair amount of bravado. Wahlberg can play this kind of part in his sleep and, somehow, manages to make you forget that he is actually playing a fairly dodgy career criminal, whose brief respite in the realm of legitimacy is soon upended as a result of circumstance. Rather than give us a Vic Mackey / The Shield kind of anti-hero to root for; a tragic character who tries to redeem his past sins despite a propensity for breaking the rules, Wahlberg has us believing that this guy is a hero right from the outset. His actions are presented as tirelessly honourable; his resistance to return to a life of crime only furthers our belief in him; and his only acts of violence are in protection of his family. With any other actor behind the wheel, things would never be this clean-cut – and this has both a positive and negative result on the film: on the plus side we get a hero that we can root for despite the fact that he is, for all intents and purposes, an outright criminal (further drawing Italian Job comparisons); on the flipside there’s simply no depth to the characterisation and you never feel that this character is based even remotely in the realms of reality.

Playing the weasel-like, slimy psychotic villain as if he was simply born for the part, Giovanni Ribisi (Avatar) is also on familiar territory; snivelling, snorting and threatening his way through the role with aplomb. To be fair to the guy, he makes for quite a competent, menacing bad guy – the palpable threat he poses towards the hero’s wife is suitably unpleasant and suitably convincing – but I much prefer Ribisi in his against-type good-guy roles; if you think back to his scene-stealing supporting role in The Gift, you’ll wonder how it ever came to this.

Slightly more unpredictable is Ben Foster, who plays Wahlberg’s character’s ever-reliable best friend. Foster has managed to avoid ever being pigeon-holed in roles – he’s played both good and bad guys equally, and you simply never know how things will turn out with one of his characters. That’s quite an achievement, in this day and age, and Foster’s contributions to everything from Pandorum to The Mechanic, from 3:10 to Yuma to The Messenger, have always carried an edge, even if it has often cost him any natural likeability. You’ll find it very hard to like him here either, even though he pushes all the right buttons, and perhaps that’s only a good thing in what is otherwise a fairly formulaic thriller.

I really don’t know what to make of Kate Beckinsale. She’s undeniably gorgeous, and has a certain grace about her that bubbles to the surface even in a dressed-down role like this, but she’s very rarely been given roles that would test her acting skills (she is better remembered for the Underworld movies than for her surprisingly good turn in The Aviator) and is more often than not known for showing no acting skills (Whiteout). Still, innately cute, warmly vulnerable, she’s the perfect wife-under-threat for Wahlberg’s character to worry about.

There’s a wholly bevy of subsidiary characters as well, brought to life with mixed results by the likes of Spiderman’s J.K. Simmons, as a caricature crooked ship’s Captain; X-Men: First Class’s Caleb Landry Jones as the irritating brat who started this whole mess off; Lukas Haas (Red Riding Hood, Brick, Inception) as one of Wahlberg’s gang; William Lucking (Sons of Anarchy, The Rundown) as Wahlberg’s convict father; and David O’Hara (Cowboys & Aliens, The Departed) as a crime boss with a vested interest in the planned scam.

It’s somewhat ironic that this routine action-thriller remake should come from the actual star of the original film, Icelandic filmmaker Baltasar Kormakur, who is perhaps best known for his debut directorial effort 101 Reykjavik. It seems strange that he would elect to reproduce a competent thriller that he starred in, but he certainly does not do a bad job, wringing just about as much tension as you could have possibly hoped for out of the convoluted narrative and, somehow, managing to largely avoid telegraphing the majority of the plot’s final act twists. The trouble is that he is still hampered by what is essentially a fairly routine, unmemorable escapade, and there’s precious little he can do to distinguish this film from the plethora of contemporary releases that carry almost the exact same plot.

At the end of the day, Contraband just about edges into a reasonably respectable scoring bracket largely as a result of Wahlberg’s innate charisma, Ben Foster’s reliably unusual characterisation and one or two halfway decent twists which keep the momentum going way beyond expectation. Indeen I’m sure that particularly forgiving fans may even up the score to 7/10, although it’s doubtful many would give it higher.

It’s an enjoyable, relatively entertaining production, but one which certainly requires you to suspend disbelief, and which won’t exactly surprise you by detouring too far off the familiar tried-and-tested path. A throwaway thriller with a 2-hour life-expectancy, there’s no doubt that this film could have been better, but it also could have been a whole lot worse, and it makes for a competent contender for a distracting weeknight rental that’ll go down well with a pizza and a beer.