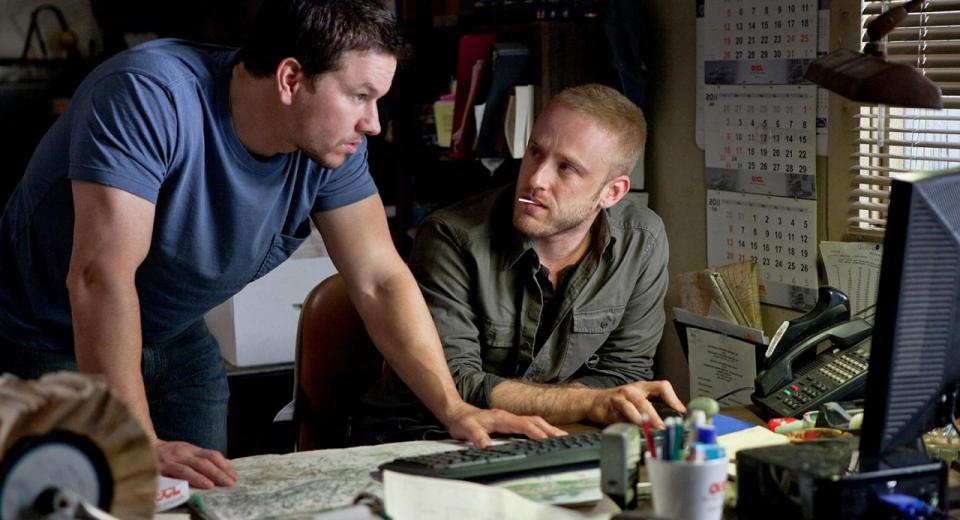 Whatever issues you may have with the quality or content of the movie itself, Contraband’s near-demo-standard video presentation leaves you with next to no complaints. Coming to Region Free US Blu-ray complete with a 1080p High Definition video rendition in the movie’s original theatrical aspect ratio of 2.35:1 widescreen, it’s a superb presentation through-and-through. Detail is excellent throughout, showing resounding clarity on close-ups as well as an unexpectedly revealing amount of subtlety with the longer shots, and maintaining the image’s texture without the requirement of any edge enhancement or unruly DNR tampering. The colour scheme is of the drained-out over-saturated look – the kind of thing you’d expect from Tony Scott – and thus colours, whilst never accurate, per se, still look resoundingly good, and totally in-line with the intended style. Black levels are deep and totally absorbing, even if this does lead to a some crush – which again, arguably, could have been, at least partly, intentional. Gritty is the name of the game here, and yet this video presentation cleans up pretty good, and strikes a high quality standard for visual tone. On the aural front the accompanying DTS-HD Master Audio 5.1 track is a thunderously potent mix that will both give your home cinema system a good workout and also threaten to wake your neighbours. Dialogue comes across clearly and coherently throughout – at least when it’s not being overpowered by the rest of the frenetic track – largely coming across through the fronts and centre channels. Effects come at you from all around, with everything from penetrating gunfire and explosions to breaking windows, body blows and crunching car crashes to populate the track, affording the surrounds a noteworthy amount of directionality and showing off the highlights of this well-designed accompaniment. Indeed all of the more engaging setpieces – which come one after another – and enhanced by a wonderfully engaging representation here, creating a palatable atmosphere within your very living room and oftentimes leaving you with nowhere to hide. The LFE channel gets in on the action almost throughout the duration, either thrumming along in the background or providing a much welcome punch to accompanying the more thunderous effects. Sure, this track does not quite have the refinement or subtlety to be awarded a demo score, but it has more than enough aggressive presence to make for a very good aural rendition nonetheless.

Aside from the impressive video and audio this release also sports a hefty selection of extras, arguably more so than it deserves, and certainly more than keep fans occupied, even if those nonplussed by the film will find precious little of interest here.

U-Control PiP offers up interview snippets and behind the scenes clips peppered over the course of the movie, and running for approximately half of the film’s duration, making for quite a bitty, sporadic watch. Still, if you’re prepared to sit through it all again, there are some interesting titbits to pick up here.

Audio Commentary with Producer/Director Baltasar Kormakur and Co-Producer Evan Hayes is far more substantial, although the two are not the most verbose commentators, again leading to a piecemeal offering that is largely scene-specific and seldom drifts into more interesting anecdotal territory. Still, the two seem particularly happy with their production, and fans will no doubt want to listen the track just to pick up every little background snippet they can.

Under the Radar: The Making of Contraband is a little over a quarter of an hour in length and offers up a reasonably competent behind the scenes snapshot into the making of this movie, with cast and crew interview snippets and background footage making up the majority of the runtime. If you enjoyed the film, you’ll probably find this actually one of the more interesting offerings, but be prepared for some unintentionally funny moments, particularly when the director and his cast discuss how realistic their movie is.

Reality Factor: The Stunts and Action in Contraband runs at just 8 minutes in length and focuses on the action-side of things in what is not exactly a wall-to-wall action film, showing up some background into some of the more interesting stunt moments and how they put together some of the action sequences.

Here we get 12 Deleted and Alternate Scenes totalling just 6 minutes’ worth of extra footage which, therefore, means they’re all pretty short and uneventful – with nothing warranting inclusion back into the movie.

We also get DVD and Digital Copies of the movie. Another day another Hollywood remake, this time of a movie that arguably doesn’t even have the substance required to make a smooth transition over to US sensibilities in the first place. With a relatively straightforward, tried-and-tested plot that’s just brimming with clichés, and a familiar set of reasonably clear-cut heroes-and-villains characterisations, the film is only really saved by the natural charm of Mark Wahlberg, the reliable unpredictability of Ben Foster and a couple of nice twists that keep the momentum going long after the story should have died a sorry death. It’s pretty throwaway entertainment, but entertainment nonetheless, and whilst there’s nothing memorable about it, there’s just about enough to warrant a couple of hours of your attention.

On Region Free US Blu-ray we get very good video and audio and a hefty selection of extras, all of which should prove enticing to fans of the film. Everybody else should consider it a decent enough rental, and test the waters as to whether you can justify adding it to your collection.