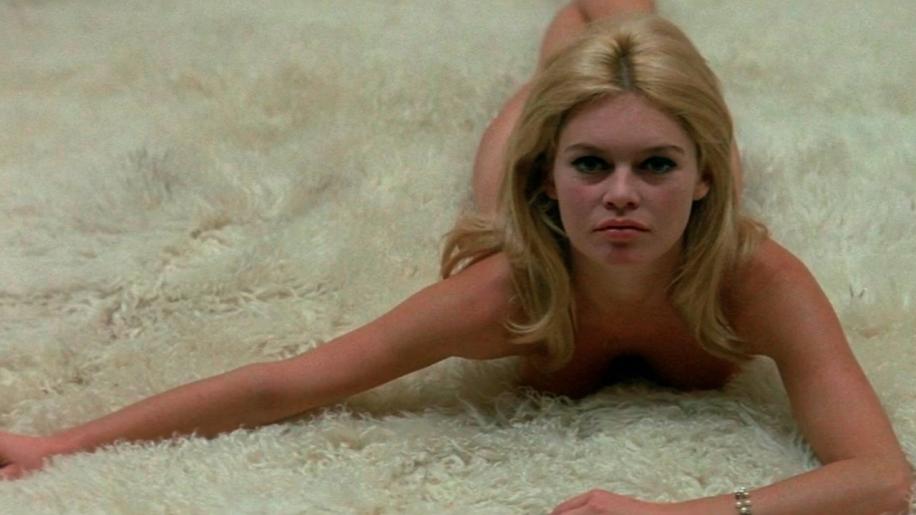 Bridgette Bardot is a French icon. Shocking the world first by her cover picture at 16 on a 1950 edition of Elle, she went on to marry a Director at 18 and cause outrage at 22 with their film And God Created Women, where her then-amoral, erotic antics led to her movies being banned in many parts of America. France lapped her behaviour up, presenting her as the first truly liberated woman since the War: a woman unafraid to display her unrelenting sexual appetite, proud to show off her body, and just as happy to objectify men as many men do women. She went on to marry no less than 4 times, had a child, but decided that she was not suitable to be a mother, left the movie business at just 39 - having done no less than 45 movies - become labelled as something of an eccentric, and followed her instincts to become an outspoken animal rights activist. But her unchecked behaviour has often been criticised as inciting adolescent misbehaviour, the very start to her career sparking off something of a Lolita syndrome (the book itself being written shortly after her teenage body came on the scene) and leading many to believe that living a life of total abandon was completely acceptable.


So whilst being a front-runner in the pro-feminist cause, possibly one of the first celebrities of her kind - she also caused a fair amount of trouble in the process. Being a female celebrity in the 50s and 60s and having no inhibitions - without a care in the world - set a dangerous example for young teen girls ever since, and set a precedent to look 'like a girl' for as long as possible rather than being proud that you have matured into a woman, a point highlighted by the fact that Bardot herself quit movies at such a young age, effectively preserving her immortal cinematic image as being forever young. Still, despite all the questions raised about the subversive impact of this French sex symbol's free-living way of life (and I'd still probably forgive her more than I'd forgive the inventor of wet-look leggings), the question here is whether or not her movies are any good, and where better to look than her work with Jean-Luc Godard, labelled a masterpiece, Le Mepris.


Le Mepris is essentially a film about making a film. Director Fritz Lang's latest vision of the production he has been working on - an interpretation of Homer's Odyssey - is a bit too existential for his Producer's liking. The Producer, an enigmatic Mr Prokosch, doesn't care what the images mean, he cares whether or not the film allows for some nudity. Drafting in Paul, a French Screenwriter, he seeks to rework the film and add more sex, inviting Paul and his stunning wife Camille up to his mansion to seal the deal. But his racy red sportscar only has room for one passenger, and Mr Prokosch, the slimy but overwhelming beast that he is, offers the seat to Paul's wife, suggesting that Paul follow in a taxi. And in the space of just a few seconds Paul considers his options and makes what turns out to be the worst decision during his years married, telling Camille to go with Mr Prokosch, using her to sweeten up the 'important man', and in the process alienating her from himself. This momentary lapse in judgment, seemingly insignificant slight, leads her to question her previously unflinching love for the man, and slowly spot the cracks in their relationship.


This was Godard's first foray into somewhat mainstream territory, and he never really wanted to make the leap - so the story itself becomes something of a much more complex tale than what it seems. Not only is it a movie by a disgruntled Director, who is reluctantly making a mainstream movie about a disgruntled Director who is reluctantly making a mainstream movie, but it is also a poignant satire on Hollywood's invasion of the European movie industry. Throw into the mix an almost too-personal depiction of his own marital dissolution - even going so far as to get his leading lady to sport a black wig, and thus 'impersonate' his own ex - and you have arguably Godard's most introspective and private work. This represented a huge chapter in his life, and his acute dissection of both ethical betrayal, but relationship self-destruction is certainly a brave one.


Unfortunately, as much as it pains me to say this, despite all its pretentions to be more - the end result is just too tedious to really care about. This is a boring movie. Nothing happens. Godard is so busy wrapping his movie in on itself, piling layer upon layer of parallels, symbols, and allegories into the mix that he forgets to have anything actually happen. He forgets that for all the nasty Producers that he is seeking to subvert, for all his anti-establishment behaviour, and despite his honest (if clumsily vague) dissection of his own marital experiences, he has crafted a movie that just isn't very easy to watch, understand, or enjoy.


The performances do not help things. Bardot may have had a body to die for, but she takes underacting to a new level, sleepwalking the role - which is admittedly quite a subtle one - and often playing it more like a silly and immature girl who, though she knows she has been insulted, has no means by which to either understand or communicate her reaction to it. I'm sure this is what makes people love Godard films - the way he gives us a broad, almost vague look at the situation, and allows us to feel what is going on instinctively - but the end result just did not work for me. People simply don't behave like this in a relationship - let alone marriage - they would not have got this far if they did. Perhaps in some alternate universe, or perhaps in the movie-making business (particularly if you're a pretentious, arty, eccentric Director who marries your beautiful, ridiculously young leading lady), or maybe even back in Sixties France (although I don't believe that), but not in real life. So, whilst the subtle slight, and the initial sign of contempt, both play as being authentic, the rest just seems unbelievable.


More to the point, even if this were some strangely alien relationship meltdown which most people just haven't encountered, the way in which it is captured just does not lend itself well to the medium of film. It's boring. Plain and simple. Having Jack Palance shout a lot (and, oddly, read clichéd 'wise sayings' from the tiniest book in the world, which he keeps annoyingly pulling out of his pocket) and getting legendary Director Fritz Lang to play himself, doesn't make the blindest bit of difference to what is still a fairly boring, and tremendously dated movie about a fairly innocuous (and thus bland) marriage breakup.


I do like my obscure classic movies, Kurosawa's Red Beard, Clouzot's Wages of Fear, the original Taking of Pelham 1 2 3, but this is definitely not one of them. Perhaps closer to its release, this movie had an impact, certainly - in her time - Bridget Bardot had an impact, but things sometimes fade, and Le Mepris has lost its punch over the years, becoming what many continue to regard as a compulsory classic, despite the fact that few can understand why. I dare say fewer still will actually enjoy watching the tedious mess.