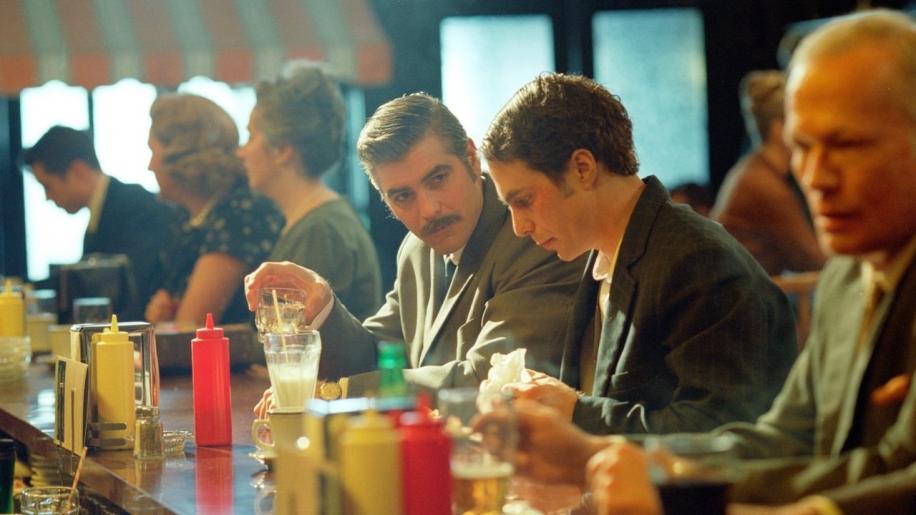 Confessions of a Dangerous Mind Movie (2002)

George Clooney makes his directorial debut with a movie that promises a captivating story, but which sadly fails to deliver the goods. The story set in the 50's and 60's follows Chuck Barris (Sam Rockwell) a struggling TV producer who is unhappy with nearly every aspect of his life. A CIA agent (George Clooney) who has been watching him for some time recruits Barris, he promises him some excitement to spice up his sad existence. At the same time a few ideas for TV programmes (which include the idea for the Dating
Game) gives Barris the opportunity to make it big in television, providing the perfect cover for his CIA activities. But is Barris a CIA agent? Will he eventually realise that he has real love under his nose, with his long time girlfriend (Drew Barrymore)? Do we care?

Well unfortunately I couldn't really care less for Barris or the movie. It has some major pacing flaws with the film actually losing all forward momentum on a number of occasions. The performances from such a star filled cast are also second rate with Clooney and Rockwell wasted in their roles. Rockwell tries hard with the material but his character is so under developed (like the script as a whole), that his characters selfish arrogance put me off caring what happened to him. The film also includes some real life testimony interviews with supposed colleagues of Barris cut into the picture at various points. I can only guess that this is intended to help with the narration and guidance, but why couldn't the movie give these insights through its own narration without stopping for an interview?


Don't get me wrong there are some signs of what could have been interspersed here and there, but things are just so disjointed and badly paced it falls flat and stays there. I had hoped for good things, Clooney has worked with some of the best in the business and clearly has learnt much. But the source material is seriously under par and the final cutting of the movie leaves much to be desired. A major disappointment all round and one film which I have watched recently where I just wanted to press eject.