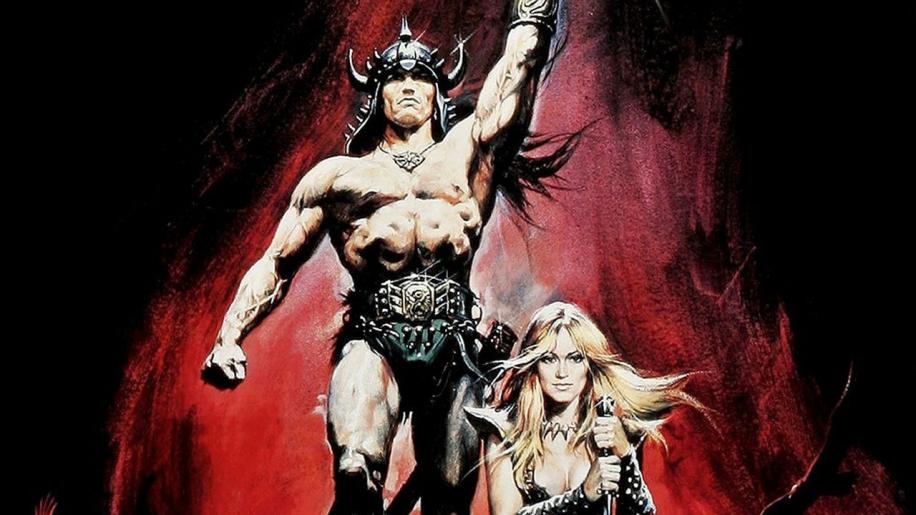 Conan The Barbarian is presented in a 2.35:1 aspect ratio anamorphically enhanced widescreen transfer that is starting to show it's twenty-five year age. Still, it looks as good as it has ever done, with decent detail and clarity and only a little softness on some of the wider shots. Sure, there is a sheen of grain that runs through many of the sequences, but it never really affects your viewing pleasure. The colour palette is quite wide, especially given the 'globe-trotting' setting, but mostly faded. Still, the blood is correctly crimson and the blacks are, for the best part, deep and solid. The transfer exhibits a few blemishes that again reflect its age but overall it is a good effort.

Conan has been given the deluxe treatment with a new DTS track that supersedes the previous Dolby Digital 5.1 mix. I never found any problem with the Dolby mix but the DTS alternative is clearly superior, with a more powerful, rumbling LFE channel and keener attention to the special effects. The dialogue is clear at all times and the directionality is spot-on, effects and dialogue both coming out of the relevant speakers, the latter mainly out of the frontal array and the latter predominantly emanating from the rears. The Dolby mix provides most of the same, just to a lesser degree on all counts, but will easily suffice for those not equipped with DTS. If you're a big fan of the movie then upgrading to this DTS edition is seriously worth considering.

First up there is the original audio commentary with Director John Milius and Conan himself, Arnold Schwarzenegger. I can't remember the last time I came across Arnie doing a commentary and he is one of the most entertaining commentators that I have ever come across. Not only does he have a real passion about what he does, but he also has a great sense of humour that keeps this track never less than enjoyable. Right from the outset they are both providing some great nuggets of information about the production, including how it was originally meant to be a trilogy and how Arnie was always prepared to do a third one. They talk about the metaphors in the movie - including the opening title sequence of the sword being forged - and they go through all of the actors, giving us a background into both the characters they play and their own film history. Much of the time they spend actually revelling in the movie itself, praising the scenes and the score, only occasionally noting the locations and shooting techniques and dropping in enough amusing anecdotes to keep your attention. They mention some extra scenes that were cut - including a particularly gruesome scene in the pit-fighting montage where Conan decapitates a female fighter - which we don't get in the deleted scenes. Arnie talks about some of the stunts that he did and some of the damage he sustained, regaling how he really bit into a buzzard during the crucifixion scene. It's a very interesting and informative commentary and one of the best that I have ever listened to.

Conan - The Rise of a Fantasy Legend is an all-new eighteen-minute featurette with contributions from most of the major cast and crew talking about the concept of Conan and how it found its way to the Big Screen. Although Arnie's nowhere to be seen, the great James Earl Jones pops up to growl out some interesting and amusing anecdotes about both his co-star and the production. There are plenty of graphic novel images on offer here, along with some footage from the film - but nowhere near enough to make it seem fluffy. In fact, this is one of the best and most interesting featurettes that I have ever seen. The discussions on the creator of Conan, Robert E. Howard, who came up with the character back in the thirties and basically instigated the whole sword and sorcery genre are particularly good and the background into Conan's character - taken a great deal from tales about Genghis Khan - is also great. Although I might not agree with their theory that Conan's popularity eventually gave rise to successes like the Lord of the Rings trilogy, this is still a great featurette.

Conan Unchained - The Making of Conan runs at almost an hour in length and charts the production in more detail from inception to its popularity on release. This time we get interviews from simply all of the cast members including The Governor, Arnie, himself, Sandahl Bergman, and even Max Von Sydow and from more of the crew involved, including the great Director Oliver Stone. They talk about the original script - by Stone - and how he was supposed to direct it but, without backing, they had to sell it to Dino DeLaurentis who got John Milius to re-write and then direct a much more toned-down version of Stone's original story. Some of Stone's original ideas sounded tremendous -with armies of insects and mutants and even clones - it is almost a shame that he never got to realise that version. Although quite lengthy, there is simply no stone left unturned here about the production - from sword training to costumes to set design - and, with plenty of behind the scenes photos and even footage of a few alternate scenes, it is simply another must-see featurette for fans.

The Special Effects - Split Screen Video featurette runs at about ninety seconds in length and merely shows one scene pre and post-effects, namely, the scene where Valeria defends Conan from evil spirits. This is a nice, if limited watch-once feature.

“The Conan Archives” is a twelve-minute featurette that showcases a larger number of images from both the comics and the concept art. The amazing thing about this featurette is that it is completely devoid of dialogue, merely displaying the images in a slideshow that basically speaks for itself. You see, if you've already seen the movie then the great thing about this option is that you can recognise key scenes and images from the movie in this original art, from the costumes to Conan's seminal throne pose. After about four minutes of artwork we get some production photos, again quite interesting, and finally we get some of the spectacular Conan publicity artwork and still showcased over the last three minutes of the running time. This is well worth your time and with the images shown on a five second cycle, you get through a fair few of them over the duration.

The Deleted Scenes Sequence runs at a little over five minutes in length and shows some quite interesting footage cut from the film, including cameos by some of the crew - including the director himself - and several alternate takes of Max Von Sydow's very bloody King's death sequence. The funniest scene though is the more outtake-like shot of Arnie being caught by the dogs when trying to scale the rocks and cursing at not being about to get away from them.

There are also two theatrical trailers, both of which are quite entertaining without giving away too much of the movie. Clearly the second of two is set to better music - being part of the score taken from the film itself and written by Basil Poledouris, who was behind the soundtracks of many of Arnie's earlier movies.

Finally we get extensive production notes in a text format.

Conan has always been a rather underrated anti-hero but has had perhaps too many DVD releases, including two Region 2 special editions. This one has decent technical specifications and just about the best extras I have come across - a commentary you will actually want to listen to (mainly because of Arnie), featurettes you will actually want to watch, and deleted scenes that are actually worth seeing. So, all in all, if you don't have Conan already, then getting this is a bit of a no-brainer. Highly recommended.