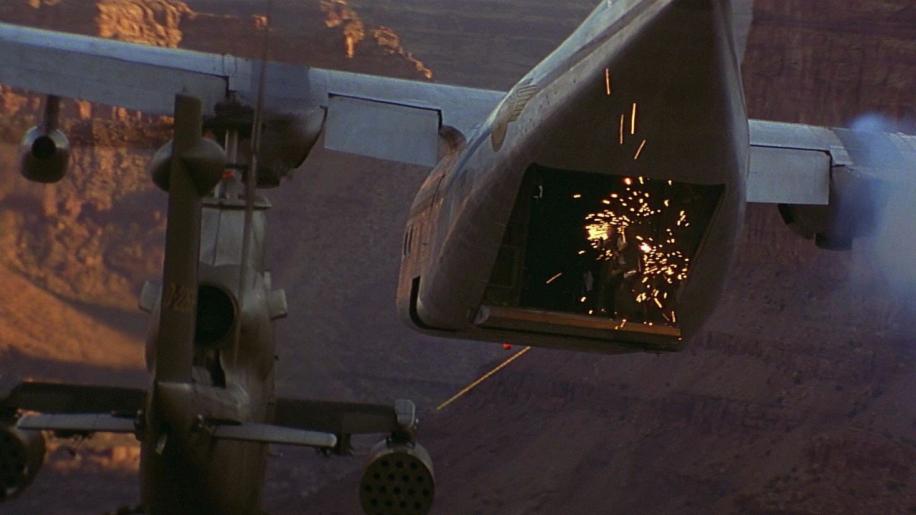 The Justice Prisoner and Alien Transportation System is a US federal government agency which is responsible for the transportation of persons in legal custody between detention centres, courthouses and any other place where they may need to be. The service transports more than three quarters of a million prisoners or illegal aliens across the US each year and is policed by the US marshal system.

Because of the nature of the majority of the passengers, the service is fondly known by those that travel and police it as Con Air...
The movie Con Air tells the story of Cameron Poe (Nicolas Cage), a retiring US Ranger returning from operation Desert Storm. He meets up with his pregnant wife Tricia, played by Monica Potter in the bar where she works. Wearing full military regalia, Poe is confronted by some real rough rednecks who take exception to Poe coming back to claim his wife. A fight ensues in the car park where one of the guys pulls a knife on the ex soldier. Cameron reacts instinctively but goes over the top and ends up killing the knife wielding villain.

Poe ends up being charged with manslaughter and an unsympathetic judge decides that because of his military training, he is not governed by the laws of the land and sentences him to 7 - 10 years.

The opening credits are taken up covering the whole of his sentence where he makes friends with Baby O'Dell, played by the ever likeable Mykelti Wilson. As the opening credits come to a close, Poe completes his sentence, and, along with O'Dell who is being moved to a super prison being built in Alabama, hitches a ride on a Con Air flight to get home. Also tagging along for the ride is Cyrus “The Virus” Grissom, played by John Malkovich in a menacing mood.

DEA agent Duncan Malloy convinces the overseeing US Marshall, Vince Larkin (John Cusack) to allow him to place an undercover agent on board to gain intelligence from a passenger. Larkin agrees - as long as the agent isn't armed. Malloy slips the agent a weapon as he cuffs him though.

After take off, several of the inmates, led by Cyrus Grissom, take over the plane in a way that I won't go into here - though I doubt there aren't many people reading this that haven't seen this movie...

Remembering that Cameron Poe is actually being released here, Nic Cage's character wants nothing to do with the takeover and does his utmost to upset things. Eventually bringing the C-123 aircraft down on the strip in the middle of Las Vegas, Con air lays claim to one of the biggest and loudest finales in cinema history...
OK - when it comes to movie choice, I'll admit that, given the choice, Con Air wouldn't be on my list of films to watch in the near future. I do own the R2 special edition SD DVD though and knew what I was in for. I prefer the, shall we say, tamer movie. However, what would be the point of investing in all that Home Cinema equipment if you couldn't show it off once in a while eh?