Stand up to attention! 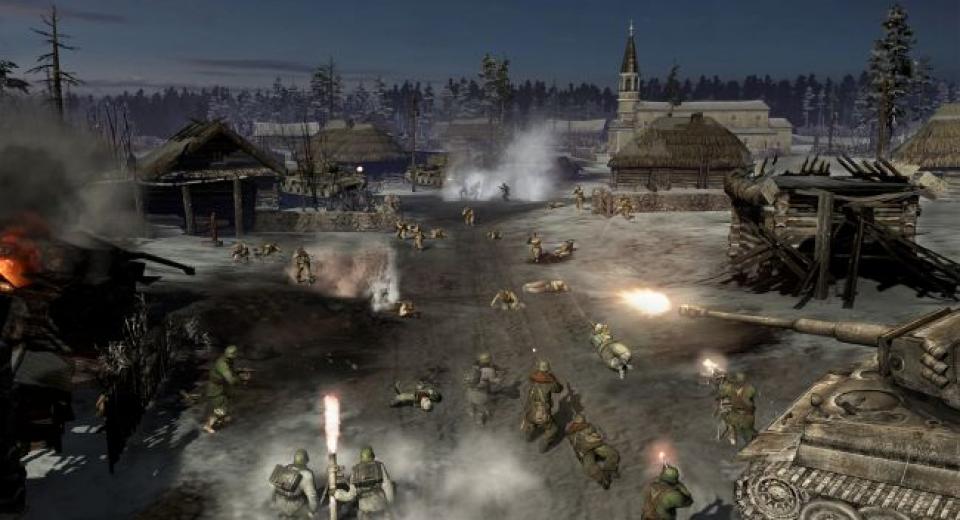 The WW2 genre; the setting of choice for the previous generation of consoles whilst the modern and futuristic genre took centre stage for this generation. Sadly it appears that the consoles have left the wars of old in the past, with the influence of sci-fi too hard to resist and becoming a strong presence in the next generation build-up. Thankfully though it seems that the PC developers out there are sticking to their guns (albeit older and more unreliable ones) with WW1/WW2 games still being released on a regular basis via Steam.

From first and third person shooters to role-playing and real time strategy (RTS) games, Steam harbours an extensive catalogue of titles based on the events of WW1 and WW2, both fictional and non-fictional. So for those like me who can’t get enough of their 20th century military history, there’s a steady stream of games to play thanks to the wonders of Steam.

In 2006, the PC crowd was treated to the excellent title that was (and still is to this day) Company of Heroes; a real time strategy based on the events of the Normandy landing and the liberation of France. As it transpired, it went on to become the highest rated RTS games of all time by numerous publications and journalists, and it still remains one of the most satisfying strategy games you can buy. Despite having a steady stream of reinforcements in the form of added content over the years, the game hasn’t had a full-blown sequel until now. Company of Heroes 2 has answered the call and is ready for active duty. After living the events of the Normandy landings and the liberation of France (which have been well-documented already) CoH2 will tell the story of the Eastern front; many of the stories from which have been left untold in film and videogame formats as they were known to be pretty gruesome and harrowing.

The game itself had a questionable development time what with the publishers of the original title, THQ, going bankrupt before the game was completed. Thankfully though, Sega purchased developer Relic which ensured that this sequel saw active duty and wasn’t forced into early retirement. With its feet firmly planted in the RTS world, Relic has the right tools for the job when it comes to producing another hit military strategy title. When it comes to the crunch though there are a few questions hanging over its head before it can earn its stripes like its predecessor before it.

First of all let’s tackle the issue of stereotyping which has been a bit of an on-going issue with these games for some time now. Whether it is a post-Cold War thing, or something that developers simply can’t get right, the Russians get wrongly stereotyped through voice and demeanour in many military shooters. Here it is no different, with cheesy accents and, as it turns out, the wrong portrayal of soldiers from the time in their attitudes towards the war. The US troops from the last game were heroes; here the Soviets are seen to be cowards. Coincidence, or is there still some bitterness going on? Sometimes, the scripting comes across as lazy and cut-scenes are often nothing more than filler to show off the game's fancy engine, as no sooner has it finished then you’re shipped out to tackle your next mission. The game revolves around the central premise of Lev Abramovich Isakovich being interrogated in a Gulag post-war and being forced to recollect his time throughout the Eastern campaign. The potential for a strong story is there, but with the problems outlined above, it always comes across as half-baked and underdone. You never feel attached to the characters and events involved, and there’s no sense of connectivity between the cut-scenes and the actual missions. The true grit and bitterness of war isn’t captured in the way it has been before, which is a true shame; for instance, Order 227 is ever so briefly touched on, before hastily moving us on upon its conclusion.

There are no questions when it comes to Relic’s achievements in terms of their commitment to making truly functional and rewarding game mechanics though. Little has been tinkered with (or added for that matter) when it comes to the controls and fundamentals from the first title. Any fan of Company of Heroes will know how easy it was to play, and as a result how enjoyable it was, which remains intact here.

The intricate nature of managing each unit individually returns and ultimately plays into how successful your mission will be as a result. The campaign is 14 missions in length and varies in quality, but overall is rather satisfying should you take the time to harvest all the fruits it has to offer. With returning features such as weapon emplacements and tank warfare, there can be nothing more satisfying than flanking a machine gunner or sneaking behind a Tiger tank and sending its turret skywards. Of course, it may take newcomers some getting used to with its unique control scheme and management of units and troops, but once you’ve grasped it you’ll be sold.

CoH2 doesn’t scrimp on the details either, as it is a strong audio and visual treat. All effects translate particularly well, from shells exploding to bullets being fired it makes a great impact, especially if you’re playing through a headset or meaty speakers. For some reason the game might automatically detect your settings to run it at a low resolution (not just because of my hardware, others have reported this too) so it’s best to adjust them accordingly to your own machine. Naturally, as with most RTS games, the greatest appeal lies in the multiplayer modes which make an expected return here. The multiplayer replicates the mechanics seen in the first title whereby two opposing sides of up to four players battle it out for control over a map littered with areas of acquirable territory. Much like the campaign mode, these territory points either grant you fuel, ammunition and weapons or manpower and getting a balance of all three is key to success, as is defending them.

Something completely new to this title is the weather system which forces you to make sure you have solid tactics and wait out any storms and blizzards that come your way. If your troops are caught out in the snow then expect them to freeze to death as a result, so it’s best for them to have shelter nearby to wait the bad weather out.
The AI can be a bit dodgy at times (which will hopefully be fixed in future patches) as units can occassionally blatantly ignore your orders, or take an illogical route to get to where you want them to be. They’re not scared of running straight in front of enemy emplacements or strongholds either, which is extremely frustrating but, whether as a failsafe I’m not sure, you can call in foot soldiers with relative ease and little resource expenditure. It may be to highlight the cost of the Eastern campaign and the reality of war, but sometimes it means you can just pump soldiers out without a second thought and overpower your enemy in number rather than tactic or intellect.

Company of Heroes 2 is a great game, but the question marks above its head are often too hard to ignore. The fact that this can seem like an expansion pack at times, a fantastic one at that, coupled with the issues over its story and half-baked attempt at portraying the war may be off-putting for some. If you can get over these stumbling blocks, then there is a fantastic RTS here and arguably still one of the best available. It would be safe to assume that post-release there will be lots of extra content available to purchase as well, so there'll be plenty of value for money for buyers.