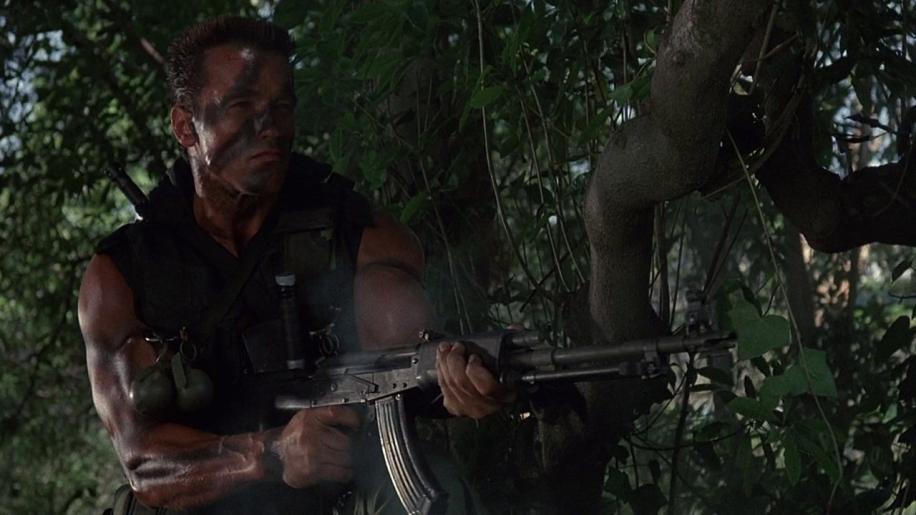 The Governor of California. A would-be contender for the presidency but for his country of origin. Arnold Schwarzenegger has come a long way from just flexing his muscles and shooting people. Although he'd started off as Conan, it was his role as the Terminator (an unusual bad guy choice for a guy who would go on to be such an action hero) that really got him noticed. Of course he was catapulted into stardom, but before doing quality actioners like Predator and Total Recall, he did a couple of more cheesy action movies, like Commando. Ludicrous, illogical, packed with really bad jokes and one-liners, an outstanding amount of macho posturing, ridiculous action sequences and a massive body count, Commando is the definition of guilty pleasure.

John Matrix is a retired Special Forces Colonel who is trying to live out his days peacefully, in the middle of nowhere, with his young daughter. But when the members of his old Army unit start getting picked off one by one, and he finds himself next on the list, he is forced to go back into action. An Army of One, he soon realises that the plan is not to kill him, but to use him to overthrow a small South American country, using his young daughter as leverage. The race is on for him to punch, kick, crash, shoot, and detonate his way across the country to get his daughter back before the bad guys figure out what he is up to.

“A guy I trusted for years wants me dead.”

“I've only known you five minutes and I want you dead, too.”

Originally I think this was supposed to be a serious movie, along the lines of Rambo: First Blood, but with Arnie on a tight shooting schedule between movies, they clearly decided to take things in a different direction. I wonder whether it would have been more of an action-thriller had it been in the hands of the first choice director, John McTiernan, who went on to do Arnie's Predator. Still, as is, Commando is silly, unpretentious action-comedy at its best. We're not talking Last Action Hero here, it seems like everybody on board is taking themselves seriously - not least Arnie - and yet there is a knowing sense of comedy about the whole affair. Right from the ludicrous opening credits sequence, complete with hilarious sweet 'happy families' scoring, there is no way to avoid laughing. And if you switch your brain off, the subsequent ninety minutes can be thoroughly entertaining.

Arnie was just hitting his stride here, his name above the title for the very first time, and he plays it straight throughout, whether dispatching his foes in stupid ways (impaling them with pipes or table legs, or slicing their heads off with gardening implements) or delivering some of the most atrocious (so bad that they're good) one-liners you will have ever heard. He's laughably excellent throughout, particularly kitted out complete with Light Machine Gun, Shotgun, Desert Eagle and Rocket Launcher. Really, is this what commandos do? And the oft-asked question of Arnie's Commando versus Sly's Rambo really isn't worth thinking about - Arnie is officially indestructible in this. Arnie from Predator versus Sly from First Blood, now that would be more interesting...

Backing them up we have an assortment of vaguely recognisable faces. Bill Duke plays one of Arnie's Green Beret opponents. He went on to be a part of the team for Predator a few years later, and has slightly more recently had cameos in Exit Wounds and Payback. Then there's Blood Simple's Dan Hedaya, hamming it up with an improbable accent as the evil South American Dictator and Mad Max 2's Vernon Wells, doing his best portly Freddie Mercury impression, supposedly as Arnie's most deadly opponent. And we haven't even covered the love interest, the improbable air stewardess who gets caught up in things (and clearly only appears to be along for the ride in order to say and do stupid things), Rae Dawn Chong. She's awful, but without her the movie wouldn't have been half as cheesy, which is - debatably - a compliment.

“You steal my car, you rip the seat out, you kidnap me, you ask me to help you find your daughter which I very kindly do, and then you get me involved in a shoot out where people are dying and there's blood spurting all over the place, and then I watch you rip a phone booth out of a wall, swing from the ceiling like Tarzan, and then there's a cop that's going to shoot you and I save you and they start chasing me. Are you going to tell me what's going on or what?”

Plot-holes and overwhelming improbabilities are blatant throughout, from the Porsche sequence (which reminded me of those die-cast toy cars I had as a kid which had rotating doors to switch between 'damaged' and 'undamaged'), to Arnie's method for getting off a flight. I mean, really, how come everybody is such a bad shot? You have to put it all aside though, if you want to glean any kind of enjoyment from this debacle, but much enjoyment there is to be had if you can do so. This is the ultimate in no-brainer fun, the most preposterous, the most ludicrous, and thus - if you're prepared to accept it as such - also one of the most watchable of this ilk of movie mayhem. There really aren't many action movies that can be this cheesy and get away with it, but Commando does, and as such it warrants a position in anybody's collection.

Note the complete lack of sense in this circular piece of dialogue:

“I don't have to try. When Matrix finishes the job, he'll be back for his daughter. Now whether she's alive or dead doesn't matter. Then he'll be after you. Now the only thing between you and Matrix... is me.”

“It is you that is afraid, Mr. Bennett. You are afraid of Matrix.”

"Of course: I'm smart. But I have an edge: I have his daughter.”