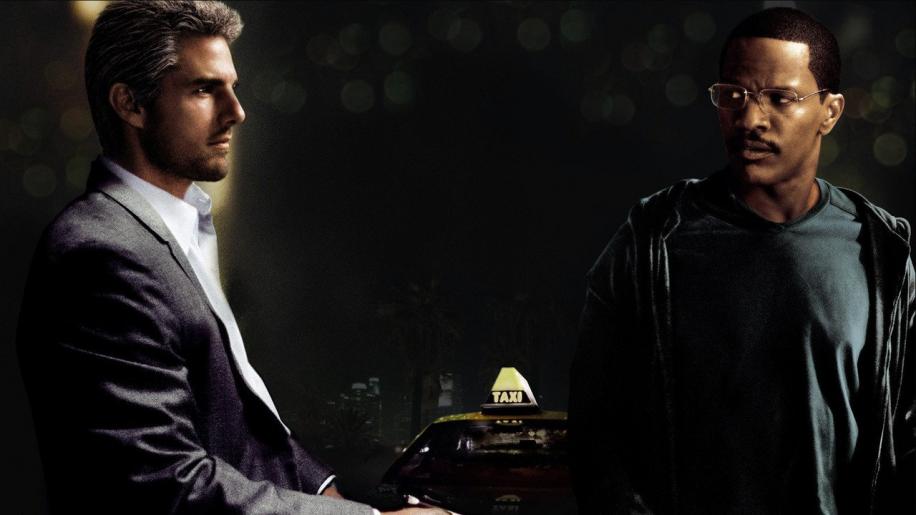 'Collateral' was released in 2004 and was directed by Michael Mann. Still riding on the wave of success that 'Heat' brought him, Mann went on to deliver so-so movies in the form of 'Ali' and 'The Insider'. Seemingly more versed in the world of taut action thrillers, such as 'Manhunter' and 'Last of the Mohicans', Mann attempts to return to his glory days with this movie. Enticing up and coming actors, as well as seasoned veterans at the heights of their careers, and almost forming the movie around them, is a technique that Mann employs to great effect and this production is no different. A pioneer of cinema and often ranked in the top 100 Directors of all time, Mann is a well decorated veteran who generally delivers the goods, often in spades.

Speaking of seasoned veterans, Mann casts none other than the normally impeccable Tom Cruise as one of the primary characters in this movie, a man known only as Vincent. The ying to Cruise's yang is Jamie Foxx, a then rising star, who enjoyed bit part success in 'Any Given Sunday' and 'Ali'. Obviously having impressed Mann, he is cast as Max in this movie, the other main player in the cast. Jada Pinkett-Smith (it's almost incestuous the manner in which Mann uses his actors network to pad out the credits!) also crops up in a secondary role, playing Annie. Another bright young talent, Mark Ruffalo (who is rumoured to play the new Incredible Hulk), takes on the role of Fanning.

Max is a simple cab driver with big dreams. He is neurotic to the core, afraid of intimacy and generally a bit of a coward. Nevertheless he is a kind man and has nothing but good intentions, taking great pride in his sparkling cab and diligently pursuing his dream of running his own limo company (all the while taking constant abuse from his asshole of a boss). Following a chance meeting with a hot young attorney, who takes a shine to Max for his honesty and sincerity, things are at last beginning to look up for the L.A. taxi driver. His next passenger, who almost takes another cab, will prove to be a not so pleasant experience. His name is Vincent.

Engaging in some light banter to break the monotony of the cab journey, Vincent explains that he is in L.A. for one night to close a massive real estate deal and propositions Max with an offer to rent his cab for the night. With six hundred bucks at stake, double what Max normally makes in a shift, he reluctantly (afraid of breaching company policy) accepts the offer. With five stops across the city and a 6 A.M. flight out of LAX to catch, Max certainly has his work cut out for him but he has no idea how difficult this particular cab ride is going to be. Things take a considerable turn for the worse when Vincent promptly kills the poor unfortunate at the first stop of the night. As Max desperately tries to renege on the deal, Vincent reminds him of their contract and forces Max to take him to his next destination. With the LAPD hot on their trail, Max begins the most hellish night of his life.

I have to admit that I'm a massive fan of 'Collateral'. While 'Heat' marginally pips this one to the post, it is without doubt some of Mann's finest work. The plot is as taut and as slick as they come, with the ruthless hit man (Vincent) ploughing his way through his list of targets with Terminator like determination. As we leap from one destination to the next, the full context of Vincent's mission becomes clear, with an accompanying increase in pace, action and intrigue. The action content is plentiful, with lots of edge of the seat moments and one stunning standout scene (I am of course talking about the bit in the nightclub). Never one to simply rest and frame, Mann employs his considerable arsenal of directorial techniques to keep the whole piece feeling fresh and energised. Each scene contains too many camera angles to count and the experience really serves to keep the audience off balance and to inject a healthy dose of excitement into the mix. Long shots, cityscape shots, reflected shots, top down shots of car chases and carefully framed action set pieces are all included in abundance. As a director, Mann is studious and meticulous, and he has created a highly polished and well constructed movie with 'Collateral'. It's also worth noting that this picture picked up an Oscar nomination for Best Editing, a facet of the end product which really shines.

The cast is simply perfection. Like fellow handsome thespians, Depp and Pitt, Cruise takes a leap of faith here, taking on a role that you would never normally associate him with. He is very very impressive indeed and for my money was a better choice than Russell Crowe, who was originally selected to play the character of Vincent. He handles himself and his glock in a manner that instantly convinces the audience that he knows exactly what he is doing. Smiling only sparsely throughout the entire piece, the menace which the pint sized pretty boy can generate is a times very intimidating. This is in part due to Cruise's grey locks, stubble, expensive suit and uber confident killer personality (and the wonderful way he clenches his jaw in anger). Although he can overdo the performance a tad (to be honest I only noticed this slight over exuberance this time round), this, for me, is his finest performance to date (yes, it even tops Les Grossman!). It's only a shame that Cruise did not continue this migration and evolution into a diverse and admirable actor but instead lost the plot somewhat and jumped around on Oprah's couch for a bit before returning to his normal routine. He still remains, for my money, one of the best on screen runners though! Foxx is equally as impressive and although his performance can seem a tiny bit forced and unnatural at times, he does a fantastic job for an actor with little lead role experience. This point is proven with his nomination for Best Supporting Actor for his performance in this movie. He develops his character just as well as Cruise, adding emotion and connecting with the audience with ease, allowing Max to finally grow a pair as the movie progresses. The chemistry between the two stars is obvious and the pair are well matched and excellently cast in their respective roles. Pinkett-Smith fares well in her role and although her character is a little shallow and underdeveloped, as is Ruffalo's character, both provide solid support to the main players. Keep your eyes peeled and can also spot Jason Statham in the opening scenes (for approximately ten seconds!).

A movie that I would compare to 'Inside Man', 'Collateral' is equally as enjoyable but infinitely more violent. But this aspect of the presentation really adds to the overall feel and is perfectly proportioned to the rest of the content. Mann is a master at switching pace and direction and he uses moments, or rather flashes, of violence to shock and draw the audience in deeper. The plot never falters, slowly building to an exciting crescendo. Although the closing scenes are a little contrived, they provide excellent closure and to be honest I couldn't think of a superior ending so my point is somewhat moot. There are a couple of movies over the past couple of years that have managed to find the perfect combination of cast, script and director and this is one of them. I have returned to 'Collateral' a number of times since its cinematic release and my enjoyment and appreciation of this well constructed thriller has increased with each viewing. I would urge anyone who has not seen this movie to pick it up on Blu-ray as the central performances are worth the asking price alone. This aspect of the presentation aside, Mann has produced a highly engaging and exciting picture and as such 'Collateral' comes highly recommended and is awarded a high eight.