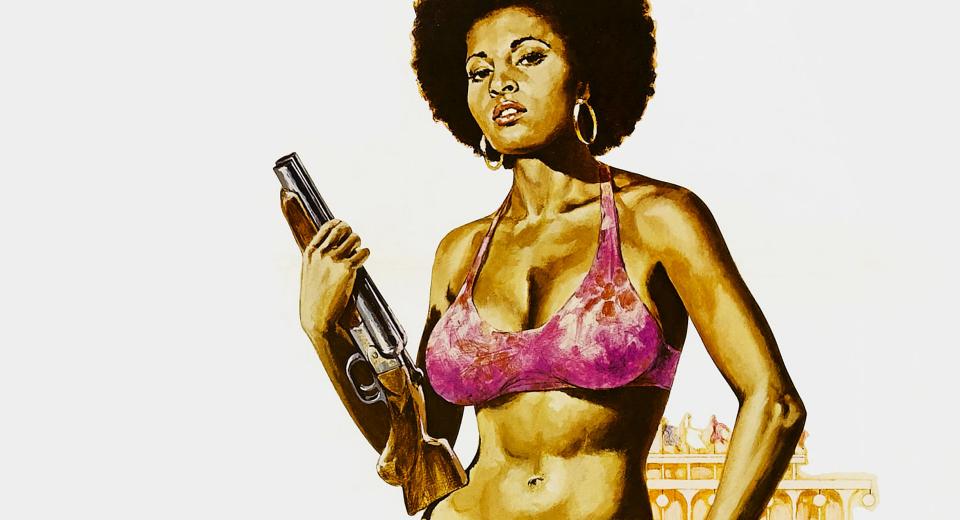 Rushed into production in order to beat Cleopatra Jones, out of the gate, Coffy was just about as low budget as it gets, but Jack Hill somehow managed to deliver a minimalist revenge thriller whose high points overshadow the limited script, action, acting, and just about everything else bad, on offer. As much to do with icon Pam Grier’s star power as it has to do with Hill’s twisty genre subversiveness, as Grier’s nurse-turned-executioner genuinely convinces in what was quite a strikingly against-type role. This was a non-male, non-white character who was educated, had a professional job, and expressed a distaste for drugs. It was almost unheard of in the early 70s.
With Grier remarkably convincing in every one of her guises – from high drug-addict to high-class escort; from hard-working nurse to hard-ass avenging angel, you can see why Tarantino fell in love with the girl, although it’s not quite as easy to see why Tarantino counts this amongst his Top 20 films of all time. Sure, it’s subversive in its re-definition of the male-dominated genre which, itself, had already redefined the white-dominance previously held by the genre, but it’s very rough around the edges, and not even as action-driven as its pseudo-sequel Foxy Brown. Still, Coffy stands as the first of its kind, and remains pretty memorable just for that. Coffy hits Region B-locked Blu-ray with a 1080p High Definition rendition framed in the movie’s original theatrical aspect ratio of 1.85:1 courtesy of Arrow, who previously delivered its big sister companion-piece, Foxy Brown, in the best shape that it’s ever looked. Indeed, despite the innate flaws only expected for a 40+ year-old low budget Blaxploitation flick, Coffy likely similarly looks better than it ever has done before, and the best it likely ever will.

Detail is understandably variable and, indeed, you have to make a fair amount of excuses for this presentation but, in the daylight sequences – for the most part – there are some very good scenes indeed, boasting rich textures and strong detail; close-ups impress, skin nuances pop and overall it’s a strong effort. In the darker sequences things the flaws are harder to overlook and excuse, with the black levels in particular seemingly desperate to swallow the detail whole.

Nevertheless the presentation struggles on, and a strong layer of grain remains pervasive throughout, reminding you that despite all else, this is quite a natural representation of the source material, warts and all. Colours are rich and quintessentially seventies, never ringing as vibrant and vivid as you’d like, but remaining authentic and realistic for the most part. Although the black details may trouble, and there is some innate softness to the piece, it’s hard to fault the presentation as the best that the film has ever looked and likely will ever look. On the aural front, the uncompressed linear PCM mono audio track is a similarly strong but limited offering, which struggles with the innate restrictions observed with such a one-channel design – not to mention the low budget effects and material that it is trading in – but again puts in a good effort.

Dialogue comes through clearly and coherently throughout, across the frontal array which is, indeed, where most everything emanates from. There’s quite a bit of action, albeit bookending the piece, and whilst the gunshots don’t have the same depth and penetrating oomph that we’ve come to expect from modern efforts, they do shake things up enough to engage. Certainly the highlight has to be the music tracks from Roy Ayers, whose opening, closing and middle-placed songs provide highlights in an otherwise limited aural offering.

Arrow pulls out the stops for another impressive supplemental package that has far more positives going for it than either the video or the audio. Headlined by an informative Audio Commentary by director Jack Hill we get to learn plenty of interesting titbits about the production, and the rush to beat the competing studio’s Cleopatra Jones out of the gate, as well as the star-in-the-making that was Pam Grier. This is further enhanced by a brand new Interview with the Writer/Director, A Taste of Coffy, as well as a new interview with Ms. Grier herself, The Baddest Chick in Town!, who talks about the impact this film had on her career, and the pseudo-sequel, Foxy Brown, which cemented her iconic status. There’s also a Blaxploitation video essay by author Mikel J. Koven on the history and development of the genre, an image gallery and a trailer, as well as Arrow’s reliably impressive article-based booklet and reversible cover art.

A somewhat subversive take on the already rule-breaking Blaxploitation genre, Coffy beat many of its counterparts out of the gate to become one of the first female-driven revenge thrillers of all time. And whilst fans will probably better remember writer/director Jack Hill’s and iconic star Pam Grier’s pseudo-sequel, Foxy Brown, it really all started here.


Before Foxy Brown – and, indeed, before Jackie Brown – came one of Tarantino’s Top 20 films of all-time, Coffy.

Arrow’s expectedly respectful offering provides the low budget 40+ year old flick with just about the best video and audio that you could ever expect – indeed it’s a world debut for a Blu-ray release – and the supplemental package is as impressive as we have become accustomed to from the cult home video restorer. Fans shouldn’t hesitate in picking this up.


You can buy Coffy on Blu-ray here