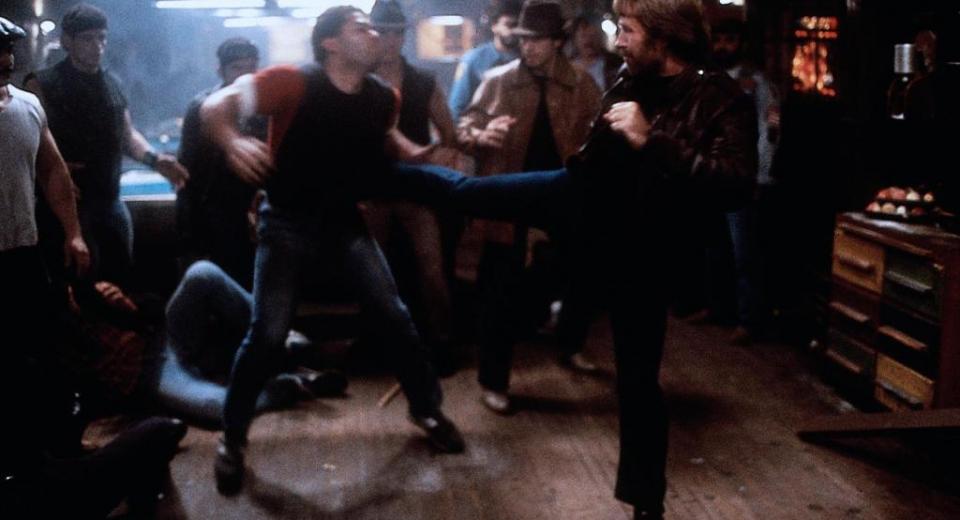 The Bible tells us that Moses parted the Red Sea. What it neglects to mention is that Moses was just following Chuck Norris. FACT.

Grain, grain and more grain. Code of Silence has an AVC encode and a transfer that has not stripped out any of its gritty texture. This is not a pretty looking film, and it can often seem grubby, dour and overcast – much like the locations and the weather around it when it was shot. The 1.85:1 image, therefore, has a rough, lived-in, stomped-on aesthetic that is very apt for a tale of dirty cops and savage gangsters.

There are some colours here that threaten to pop – some rather savage looking garments hanging on a washing-line near the start, Eddie’s red neckerchief (and Norris makes this look good, even if it isn’t around his head like it was in Lone Wolf McQuade and MIA), a smattering of neon and store-signs – but there is a real 80’s smudginess to them that stops them from taking on any genuine vitality. Now, this is faithful to the source, so when these elements look a touch awry to the eye, that is not a fault of the transfer.

There are quite a few shots when this looks really quite poor – as in very soft, ill-defined and totally lacking in what you expect from a hi-def presentation. Temper these qualms with the fact that Davis shot this low-budget and, occasionally, on-the-hoof and to a tight schedule, and you’ll clearly see that corners were cut, opportunities were taken as and when time allowed, and that the result is a bit of a hodgepodge of the downright grubby and the sporadically decent. The transfer from MGM adheres very closely to this and pretty much manages it with a fair hand. There are those who will probably not like what they are seeing, but this is very definitely the best that I have ever seen the film look. Detail sort of creeps in now and again – on clothing, weaponry, architecture and set-dressing – and this was the sort of thing that just got blurred and smothered in every version that I’ve seen previously. If you want to, you can really study the design of that utterly bizarre mullet I referred to earlier. What? How? And … well, why?

There is some inoffensive ringing around objects and characters when seen against lighter exterior backgrounds, but this is also part of the source photography and lighting. Therefore, I would say that edges haven’t been enhanced. And, to go along with this, I encountered no problems with aliasing or banding or smearing, and I had no issues with errant noise or details being crushed by aggravated black levels.

Contrast isn’t great, but it just about manages to keep some distinction going. The style of the photography means that the image can be quite flat and drained of vitality and separation, and that blacks can be a little smudgy at times as well being prone to grey infiltration, but this is just what most fans of the movie will be expecting. It is unlikely that a Jaws-style restoration would ever be undertaken on Chuck’s Code, so this is almost certainly the high-point in its visual transfer career to date.

Rough and ready, but faithfully solid. No mucking about here, folks. While Anchor Bay try to create full lossless surround mixes for the early Norrisers, MGM stick with the source and give it a DTS-HD MA mono track that has no bells and whistles, boosts or enhancements. Right away, you’re thinking about lacklustre gunfire, insipid impacts, hollow dialogue and score and an absolute dearth of atmosphere, but this track still comes over with style, force and vigour.

Obviously we can’t talk about surround activity, and the sub is hardly going to blast into action, but for a mono-track I thought that Code of Silence actually sounded quite decent. For a kick-off, I had no problem with the dialogue. Speech is nicely prioritised, with the hushed, beard-subdued threats from Chuck rippling across the single-channel and the throaty, bellicose Chicago brogue of the copious ex (and then still-serving) CPD officers and detectives, and the street-jive Hispanics of the Comacho gang all issuing with clarity. Overall depth to the mix is appreciable, with hubbub, vehicle noise, distant voices and gunshots, and a few explosions having a sense of dynamic placement within the limitations of the track.

The score has a few moments in which to shine. For the most part, what David Frank (who would make quite a career out of composing for generic action films with a cluster of Seagals to his name amongst other bullet ‘n’ brawn epics) comes up with is a typical mid-80’s jazzy beat, and this means that we hear lots of snazzy sax belching out across the soundscape and these elements make a rough-hewn but emphatic intrusion. The rattling, almost futuristic motif for Cusack’s arrival in the Comacho den is dealt with subdued but effective detail and, for me, is one of the high-points in the film, as it grows in intensity and rises in pitch. Frank also incorporates a swift and energised chime-like effect for some moments of high tension, not unlike a similar motif heard in John Carpenter’s The Fog, and this punches and bleats through the mix with some power and clarity. There is a moment in the pool-hall sequence when one of the Comacho gang puts a gun to the back of Cusack’s head and demands that he surrenders his own weapon, and he emphasises this with a nice sharp snapping of his fingers which comes over with some degree of alacrity.

When it comes to the firepower, we get some mid-range bombast from the shotguns and the assault rifles, and a very nice, very solid sound from the Ingrams and Uzis that are set on single-shot – these ring out with great punch during the finale. Being that this is still pre-Lethal Weapon, Chuck is firing an old-timer’s six-shooter. In this case a Magnum .357 which has been equipped with the same gorgeous audio-blast as Dirty Harry’s .44. I have fired both these weapons in my time (legally, of course, when it was still possible to do so) and I can say that they do not sound this cool and cosy for real … but this effect has been used since 1971 and it is one of the most distinctive gunshots in cinematic history. And it sounds great here, too.

Don’t expect whip-around sonics or spatial atmospherics with this restricted mix. But do expect a respectful and perfectly accurate transfer of a limited original source from 1985. Chuck Norris can strangle people … with a cordless phone. FACT.

Sadly, other than the film’s theatrical trailer … we get nothing. A shame. I’d have loved a commentary track from the Prowler! If at first you don’t succeed … you’re obviously not Chuck Norris. FACT.

Code of Silence is an excellent thriller. It combines the grit of a 70’s accusation upon police corruption, and actually convinces with its portrayal of the factions and attitudes within the Chicago PD, with the powerhouse action set-pieces of the 80’s macho actioner. The locations and the mood of the film have an authentic edge, and the mayhem, until the body-blasting finale, is brutal but largely unshowy. Chuck Norris is terrific as hardnosed, strong-willed Eddie Cusack, and even if Henry Silva’s cold-blooded villain is a little over-the-top, and the inclusion of a police robot threatens to topple the story into sillyville, he keeps the action as rooted in reality as he can.

The transfer is very good, even if does look old and worn and grubby. This looks film-like and faithful. There’s been no tampering done here. The absence of extras is disappointing, though. Would a commentary track have been too difficult to do?

This is absolutely great stuff. Code of Silence sees Chuck on fine form and his understated performance grants the story an enjoyably down-to-earth quality that flies-in-the-face of the bigger, more explosive and altogether dafter posturing of Stallone’s crime-fighting antics in Cobra. I’m not sure what the film was trying to say about the future of policing, but I’m certain that the inclusion of the Prowler was nothing more than a Michael Winner-style joke … but there is the tantalising possibility that it may have influenced Paul Verhoeven’s Robocop.

This is often regarded as being one of Chuck’s best films, and it is hard to argue with that. Hugely entertaining and with a splendidly baddie-decimating finale, Code of Silence comes highly recommended.

The Chuck Norris festival will continue with Lone Wolf McQuade.