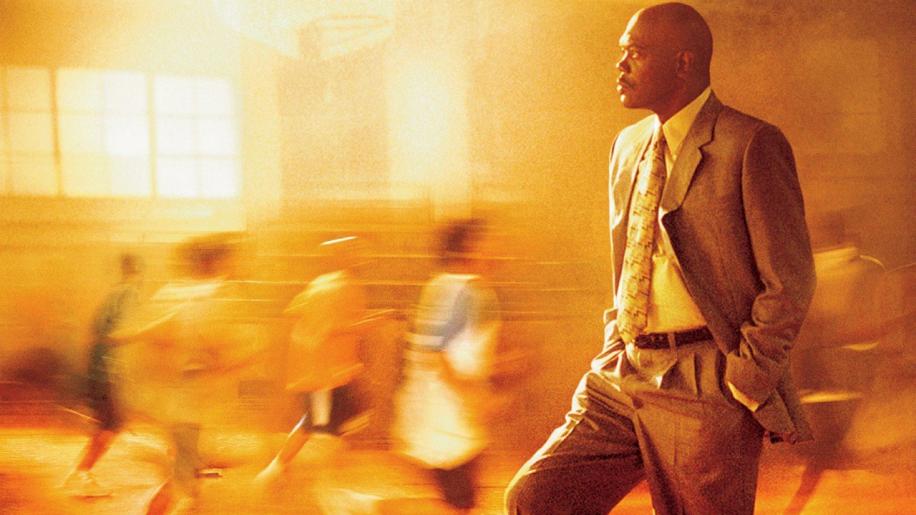 Ken Carter (Jackson) is asked by his old, and still current, high school basketball coach if he would mind taking over his position as he's too old and is too stressed to continue to do so. Carter agrees and takes a more radical stand on training the team than his predecessor. For starters, he makes all players sign a contract which boils down to a very simple premise - he guarantees to make them winners and they guarantee to get a 2.3 average (which is effectively a C+) for their studies. However, on this journey, we encounter various, albeit minor, issues - mostly relating to etiquette, thinking about it - of which the punishment is severe. In fact, quite famously (as this is based on a true story), he benched the entire team and padlocked the gymnasium, because some of the teams grades were below the agreement and as he said, if one person gets the glory, the team get the glory - so conversely, if someone suffers, the team suffers. Can the team make it to the playoffs? Can they last as a team? Can they actually work with Carter as opposed to against him?Well, a brief synopsis, but then this isn't the most original movie in the world. There are numerous underdog-look-to-become-winners type movies out there - from The Mighty Ducks to the Rocky movies - the parallels are obvious, as well as both being sport related movies. However this one has an ace in its sleeve - Samuel L. Jackson. I'm not going to say he's the greatest actor of our time, but he is certainly a very fine actor (well except in movies with the words Wars and Star in the title), but he is what I'd consider to be a very cool actor, in the same way Oceans 11 (the remake) is a very cool movie. He's just incredibly watchable (except in movies.......) and turns in another watchable, in fact almost riveting performance here. However, for me, that's where the good performances stop. All the teen supporting actors seem to ultimately come across as playing themselves, being “Boys in the Hood” or some form of variation on a theme. They all have chains, hoodies, caps etc. One has a gun, they all say “Aiiiiiiiiiiight” as opposed to managing to speak remotely eloquently - this isn't a fault of the actors, just the script which is by and large accurate for the youth of today. Apparently one of the actresses is “Ashanti” - whoever that is, I'm sorry but if you're supposed to be famous, I hope it's not for being an actress - they were all carbon copies of themselves, with maybe one slight exception. I think that all the above “issues” I've mentioned, are easily explained in one phrase - “An MTV Movie”. I remember the first one, Joe's Apartment, which then, as it is still now, is good fun. But since then, we've endured other movies and they've not been quite as heavy on the pop culture as it is here - from obvious product placement to a rap heavy soundtrack, it was quite grinding to watch, but as stated, Jackson pulls this one up considerably.

So, do I think it's worth recommending? Well I'm in two minds to be honest. I was looking forward to this, primarily due to it being a true story as well as Mr. Jackson's presence, but conversely the heavy handedness of the pop culture and story tilt me against it. If you want to watch this, purely for Samuel L. then I'd say go for it. If you're contemplating it because of the true story, then it's worth a rent - however, if I had to choose a movie for the story here (which isn't completely about basketball), I'd suggest you look up “Stand and Deliver”, definitely a more touching movie, with a better supporting cast.