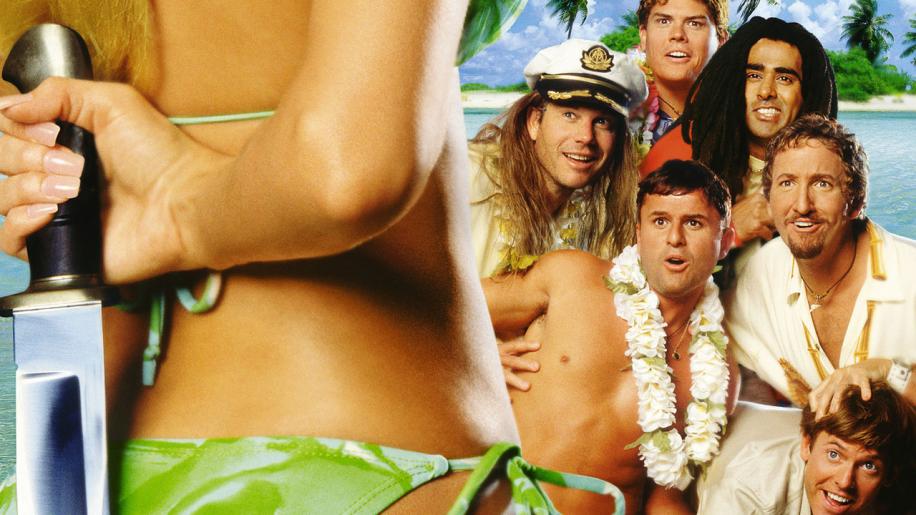 Ever wanted to take a holiday on a sun soaked paradise isle with no phones, no radios and virtually no contact with the outside world and the reps cater for your every whim? Me too! Of coarse any movie buff worth his salt will recognise that idyllic havens such as Pleasure Island, Costa Rica also have their negative points, attracting all sorts of strange folk as they do... and so it is with Club Dread - 'cos someone, or something, is killing off the holidaymakers... one by one.

This is a strange hybrid type movie; think of Agatha Christie's Murder On The Orient Express meets Friday The Thirteenth and then add a dash of the unfunniest Jim Carey flick you've ever seen and you'll be somewhere in the ball park as far as genre goes! Yet it all starts with such promise... scantily clad beauties stripping off to expose well rounded, full... well, you get the idea. All of a sudden the guy and his two gals - I told you those reps catered for every whim - are slashed to death by a machete-wielding maniac whose only goal, it seems, is to kill every holidaymaker in sight.

With an eclectic range of characters Club Dread tries its best to shock and titillate... alas even the ever-dependable Bill Paxton, who plays dread-locked party dude Coconut Pete cannot save this unfunny “unshocker” from movie mediocrity. Give the guy his due, though - even with this pap he stands head and shoulders above his co-“stars”. Rarely have I wanted to punch the living daylights out of a fictional character, but give me British accented Tennis Pro Putman and I will gladly render him senseless with my bare fists. Man that guy cheesed me off! Which, I guess, only goes to show that Club Dread isn't all bad - surely any movie capable of turning yours truly from mild mannered DVD reviewer into crazed pugilist must be doing something right. Right?