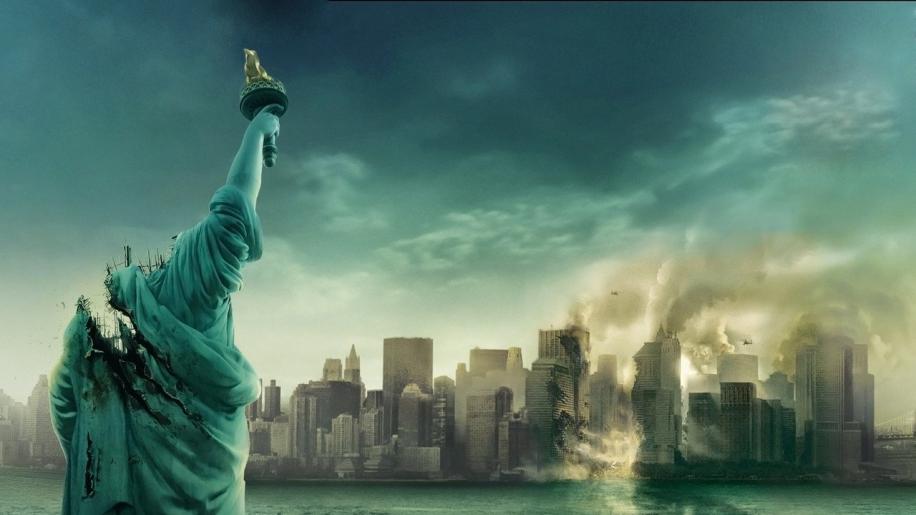 It's a frightening statistic that we are all under a near constant state of surveillance; whether we like it or not. CCTV, video camera, camera phones all are as much of our daily life as eating, so much so that like eating we accept it; it has become the norm. Just take a look at the wealth of media on the web, streaming videos from you-tube and the like gather millions of hits per day with new material being uploaded every minute. Seems we crave the information, be it trivia, nonsense or real life events. Is there a finger of blame I ask? Perhaps TV is the root of all evil, taking over from money? Whatever the reason there is no escaping being caught on camera. And with that mind set in place it seems the time is right for the resurgence of the point of view film. For that is exactly the gimmick used to sell tonight's feature Cloverfield. Whilst the POV film is not new (and neither is this films plot) the fact that streaming videos and camera footage is now at the forefront of our conscience, we can accept more readily a film purporting fantastical events when filmed in such a readily accepted format. It is a neat trick and one director Matt Reeves and producer J.J. Abrams use with skilful aplomb.

Rob Hawkins (Michael Stahl-David) and Beth McIntyre (Odette Yustman) have crossed that threshold from really good friends to lovers on the eve of Rob leaving for a new job in Japan. At the celebratory leaving do they argue and Beth leaves when suddenly there is what appears to be an earthquake. From the roof Hud (T.J. Miller), who has been tasked to film everyone's testimony, captures the devastation being wrought on New York from some unknown source. Rightly guessing that something is very wrong and with buildings collapsing all around the party goers run to the street where the army are busy mobilising to intercept the incoming problem before the head of the Statue of Liberty come crashing down. Rob distraught about Beth receives a phone call from her; she is badly hurt and cannot move. He decides to go to her apartment to rescue her, Hud, still filming, his brother Jason (Mike Vogel) and his girlfriend Lily (Jessica Lucas) together with Marlena (Lizzy Caplan) agree to come along. What follows is their escape through the subway, through army camps and finally to Beth's apartment all seen through the eye of the camera, in a frantic and desperate attempt at survival against the city being destroyed by a gigantic unknown.


The two plot threads for the film are essentially wafer thin; the attempted rescue of Beth and the destruction of the city by the creature. Neither are original, in fact when it comes to the latter it is a near replication of the 1998 version of Godzilla, right down to the babies. However the skill is in the story telling, not the story itself. As already stated the whole film is told from the point of view of whoever happens to be holding the camera and is then presented as a government document. In this sense it plays like an undercover film and on the home format works incredibly well. Reeves uses the early part of the film to introduce us to the main characters and since they are talking direct to camera, to us in effect, it is easy to get to know and empathise with each character. The testimonials may only be a few seconds long but such is the skill of the creative team that each person manages to get across their personality, we begin to care about their fate and when things start to go bad mixed feelings of voyeurism and empathy converge leaving you with an uncomfortable willingness to see their fate. This voyeuristic nature is built upon by the many cuts to the blossoming relationship that we see inter-cut into the horrific events taking place as the camera records over those earlier events.

It has been suggested that the biggest leap of suspension of disbelief is the recording itself, it is common to see “why would Hud continue recording when he could just run?”; but this does not really hold water. Think back to some of the most horrific moments caught on camera in the past, why were they caught on camera, why did they not stop recording and run/help? Simple. Money. News networks pay huge money for the best angle, the best shot, thus the incentive is to keep recording no matter what is being filmed. Looking at the structure of the film like this, the many character defining moments; Rob professing his love for Beth, intimate flirtations between Hud and Marlena, discussion about which course of action to take, fit like a glove. And the fact that Hud's continued camera work is so rarely questioned is because everyone simply accepts it as per the first paragraph.


Cloverfield takes its inspiration from two very well known films Cannibal Holocaust (1980) and The Blair Witch Project (1999) and each has its own little nod; Huds fate to camera and Beth's 'snotty' desperation respectively, the difference being that in those film the protagonists are recording their actions as apposed to Hud recording events happening. Abrams and Reeves also take the stratergy to present the entire film as some sort of bogus fact; their angle as if the disc is actually government property depicting actual events; this was heightened by the clever and mysterious marketing campaign (taking a leaf from the Blair Witch there too). There was a lot of hype about this feature and whilst it faired well at the cinema I think it is the home format where it will truly find its audience; like Wells' radio broadcast of War of the Worlds there is an air of authenticity to the proceedings that draws you in, take for example the fact there is no score to the film; life doesn't have one so why should this? Although, and this is a sly move, the sound track itself is nearly musical during the destructive phases, the gun shots and creature moving playing some macabre march as the time ticks away to the army's inevitable course of action. The fact that it only hints and does not answer any of the questions it poses; where does the creature come from, what is the fate of our heroes or the creature; and are left open for the audience to interpret with their own imagination is a very bold move and one that I applaud. New it may not be, but inventive and ballsy it most definitely is.

Whilst I am being very complimentary towards the film I find I am in two minds about the whole affair; I'm not sure I enjoy watching it. Yes it is entertaining and it is clever in its execution, but the camera movement is all over the place (as it should be) and at times frustrating. The film is very much 'less is more' when it comes to what you see, this is normally a big plus in my book, but it can also be chair chewingly annoying when you just want to see around the corner and are denied. With every subsequent viewing I see more in the frame, I forgive the beefed up picture and sound as dramatic licence and the camera work is becoming less of a grate. So I'm going to give it a thumbs up because once you can get over this snag the film becomes an even better watch.