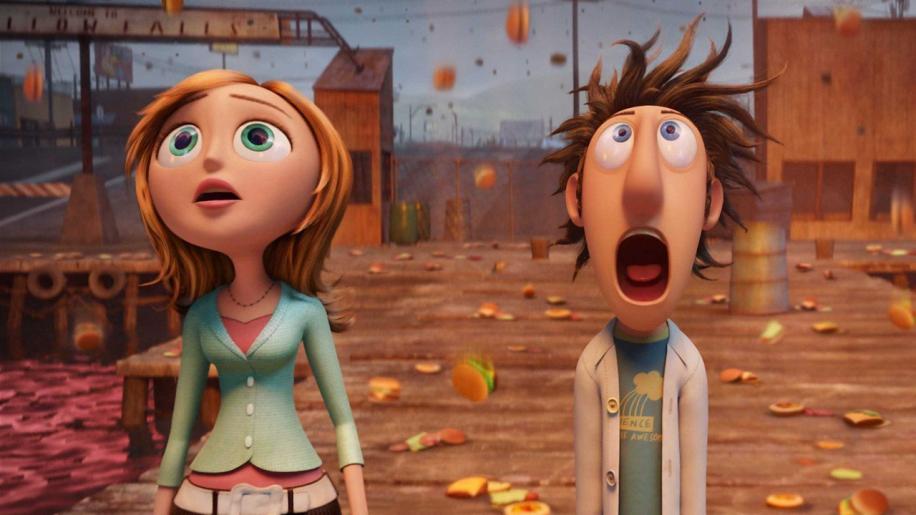 Since this disc has been out for some considerable time and having been reviewed twice before on site by Cas and Ger, looking at the UK and US Blu-rays respectively, I don’t propose to spend much time on this synopsis section, rather I’ll make a few observations before getting into the meat of the 3D review.

Cloudy with a Chance of Meatballs was a children’s book by Judi Barrett telling the story of a grandfather regaling his grandchildren of a wonderful land where the weather comes three times a day bringing food (breakfast, lunch and dinner), and how floods and storms of giant food decimated the place as the inhabitants escaped on boats made of bread. Released in 1978, is was successful enough to spawn a sequel, but has remained pretty low on the radar of ‘must read’ children’s tales. It wasn’t until 2006 when Sony announced a ‘prequel’ to the book that it really become known. Writer/directors Phil Lord and Chris Miller ran with the origin idea and pledged to make a ‘homage to, and parody of, disaster films’. And on that front they were completely successful. By setting the film before the book, Lord and Miller had free reign to develop their own characters and story line as, unlike any of the comic-book origin stories that have proliferated in recent years, who have to remain faithful to their literary counterparts, not matter how dark they go, they were not tied to any specific idea – they were the ‘Solomon Kane’ of origins, since there was no beginning to adhere to.

The story revolves around Flint Lockwood, as voiced by Bill Hader, an inventor of ridiculous things (spray on shoes, rat-birds etc) that, whilst work, are of no use and doomed to failure. Only his mother’s love and belief get him through school and makes him the man through whom the story is told. When, at a very early age, his mother gives him his first lab-coat, his destiny is sown, his childlike inventive mind never grows up; so through a montage of insane inventions we watch him age to early adulthood, his mind is still that of that burning child-like desire to please and be recognised – prove the world wrong and live up to the expectation of his mum. At the other end of the spectrum we are introduced to Sam Spade, as voiced by Anna Faris, a brilliant mind hiding as a ditzy blond to become a successful weather presenter, almost a polar opposite to Flint, and when the two meet, the inevitable bonding happens. These two characters are given the main portion of characterisation, but, unlike Pixar, who are still the kings when it comes to pathos and comedy, fail to really ignite true deep sympathy, despite valiant attempts with a father-son break and reconciliation, and Flint’s fall and redemption.

Where the film does succeed though is with its comedic output. In essence the film is as mad as it gets, with no shortage of quirky characters and loony situations. The script is well written and adds layer upon layer through the run time, apart from the obvious slapstick element, inherent in a film about food falling from the sky, the dialogue is witty and sharp and keeps adult bent, so that will keep those of an older persuasion as happy as the children in the room.

Filmed with a good eye, there is plenty of eye candy as well as the 3D aspect which concentrates on fore to middle distance to create depth rather than the ‘point at the screen’ elements that are obvious and contrived. Wrapping up the whole thing is a wonderfully dynamic score from Mark Mothersbaugh, which manages to be both rousing and sympathetic at the same time.

Sony, then, have a winner on their hands, it may not have the depth or characterisation or even the polish of a Pixar movie, but what it does have is an infectious enthusiasm that simply draws you in and refuses to let up. Well recommended.