The film tells six tales set across a span of about half a Millennium. 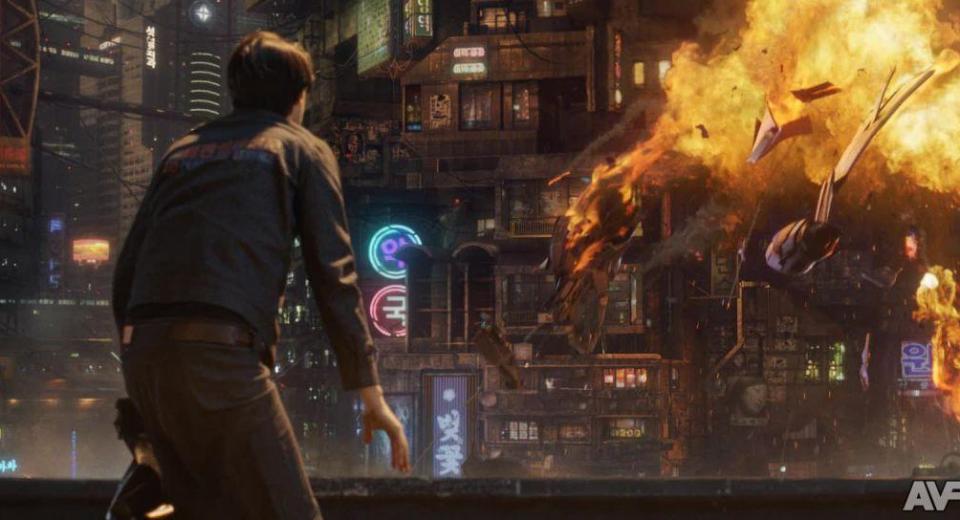 The ambitious and undoubtedly epic adaptation of David Mitchell's equally sprawling 2004 bestselling book marks a return to form for the Wachowski siblings, who haven't been this impressive since the first Matrix film, and who cleverly chose to collaborate with acclaimed German writer/director Tom Tykwer (Run Lola Run, The International) and split writing and directing duties amidst the three of them.

This is one of those films which you really are better off seeing knowing as little as possible about the story. Thankfully even the trailer doesn't give away too much. Unfortunately, reviews have been somewhat polarising in how to regard this movie, and I don't agree with either extreme - I don't see how this earned a 10-minute standing ovation from a screening in the US and was included on many Best of 2012 lists there, and, conversely, I can't see how many UK critics, including the reliably blunt Mark Kermode, regard it as a (noble) failure. All I can recommend is to go and see it yourself; see what all the fuss is about, and see if it clicks with you. It's a good, occasionally great, movie. It largely deserves to be praised for its ambition and forgiven its flaws, even if these are probably impossible to fully ignore.

The film tells six tales set across a span of about half a Millennium, with a small epilogue – set after the final story – bookending the piece. The tales all follow a core group of about a dozen characters, who are, for the most part, unrelated from one to the next, although the events in their lives mirror those that came before them; themes carry throughout the piece; and an overview of what has happened to the world as a whole in the intervening years between the pieces can be gleaned from putting together the pieces of each puzzle.

Confused? Well, imagine Crash, only on a multi-generational scale, with a sci-fi edge that reaches three hundred years into the future, and a period slant that takes us two hundred years into the past. That’s about as close as you’re going to get to understanding what Cloud Atlas is about, without watching it for yourself.

The six stories involve: a fated voyage in 19th Century America, set against the Gold Rush, but leading us nicely into the start of the abolition of slavery; a 30s-set look at the challenge of being different in proper society, as examined through the eyes of two very different composers; a seventies-set tale of industrial conspiracies, as a radical journalist investigates a plot to induce a nuclear meltdown; a present-day comedy that sees an ageing publisher trapped as a result of his own mistakes, having to reassess his life and rediscover his own voice; a future-set look at the damage done by overpopulation and further rifts in classes and a far-future-set tribal fantasy.

Clearly an ambitious enterprise to bring such a gargantuan multi-stranded tale to life, the trio of writer/directors collaborate together, although there are clearly some stronger tales and some weaker ones. The Wachowskis are behind both the first tale, and the two future-set ones, and they arguably produce the most impressive end results – these are both the strongest stories and, certainly in terms of the future-set tales, the most visually imaginative one. Their 19th Century period tale is a solid starting-point, whilst they manage to offer both a neon-future reality and a startlingly unusual tribal future realm, both impressive in different ways. Conversely Tykwer juggles a slightly more recent 30s period tale, a 70s set piece and a modern-day piece and only really succeeds with the 70s thriller element. The 30s piece, whilst authentic in look, is disjointed from the rest of the tales and does not work as well when drawing parallels; and the modern-day story is the most comedic of all six, and, whilst it features the same running themes, is sometimes frustrating in its surreal, offbeat undertones.

Structurally, the narratives are presented in an equally daring fashion, and it is perhaps here where the biggest point of praise comes in: rather than adopt the same chronology of the book – which is a pyramid format that explores the first half of all six tales in chronological order, then, once it reaches the sixth story, reverts back in reverse-chronology to explore the closing halves of each story – it cleverly just throws pieces of the puzzle at you continuously for the duration, dipping in and out of each tale and keeping the momentum moving remarkably well for the most part. For a near-three-hour movie, the tension seldom leaves up, often reaching multiple-boiling-points in order to maintain the viewers’ interest efficiently.

The key concept behind the multiple narratives – and those in the book before it – was to posit what were essentially reincarnated souls who exist in each era, each encountering, exploring and undergoing events which could also be paralleled across the generations. So whilst one ‘soul’ might be perpetually evil from one tale to the next, at the same time the stories themselves would have similarly reflective themes of war, in-fighting, and societal self-destruction. The core theme is, perhaps, the importance of the one dissenting voice; the person or group that are willing to stand up against the majority, whether it be a multinational conglomerate or an oppressive governmental regime.

Although in the book the ‘reincarnated’ traits were cleverly reflected from one character to his mirror character in the next tale, bringing this concept to life in the movie involved an idea which was both simpler-in-theory but remarkably difficult-in-practice: they would use the same actors to play the mirrored characters across each different tale.

It’s a simple solution, as it immediately allows the viewer to relate each tale to the next through these mirrored characters, but it’s also remarkably difficult to implement as, to be honest, the transformations do not all always work.

Tom Hanks (Toy Story, Road to Perdition) surely has to be praised in this regard. Some love him and think he deserves an Oscar for everything he does; others are bored of his goody-goody monotony; others still are somewhere in-between, but, whatever you think of him, he is actually good here, and remarkably effective at playing myriad different characters across the ages. In part it is a blessing that his character(s)-arc is the best of all of the multi-generational ‘souls’, and Hanks gets to play everyone from a 19th Century quack to a modern-day thug; a 70s scientist to a tribal survivor on a future earth. Hanks manages to juggle good, bad; tortured and torn, keeping us on our toes as to whether or not we should be siding with his sometimes shifty; sometimes cowardly; sometimes heroic; sometimes tragic characters.

Thankfully, he’s also probably the best example of makeup, prosthetics and ethnic blending. Perhaps it helps that he never really stretches beyond a basic ‘white’ core – they don’t try to Afro- or Asian-ify him in the slightest – but he still manages to look very different from one sequence to another, just in a way which is never so ludicrous that it pulls you out of the feature.

Which is perhaps an issue for some of the other cast members. Sure, Halle Berry (Bodyguard, Last Boy Scout) just about manages to go ‘anglo’ in one of the period pieces – and she’s quite a solid cast member, even if her characters are arguably the most lightweight
– but, conversely, Keith David doesn’t really convince us when Asian-ified. Susan Sarandon? Well, aside from playing across-the-board cameo roles, she manages to be the one participant who looks out of place no matter what era she is in.

James D’Arcy (Master and Commander, Hitchcock) does well in both young and extremely old parts, as well as making a fairly smooth transition to future-asian, so much so that you’d be forgiven for not recognising him in the latter two roles. Similarly Jim Sturgess (50 Dead Men Walking) successfully manages to make the transition from the core component in the first period piece to a reasonably convincingly asian-ified central character opposite Bae “Sympathy for Mr. Vengeance” Doona’s future-geisha in one of the latter Wachowksi chapters. He may not be the next Keanu Reeves/Neo, but his semi-action-hero contribution is reasonably satisfying if for no other reason than it comes as something of a surprise.

Hugh Grant does a commendable job in most of his parts, even if he sometimes sticks out like a sore thumb. He makes for a slick and slimy Texas ‘J.R.’-esque businessman; and is remarkably good in an effectively-aged cockney elder brother role for the modern-day tale; and he also just about pulls off both a fearsome future tribal warrior and a slimy live-action Jabba-the-hut Asian businessman, even if the boyish Grant shines through no matter how heavy the makeup. Agent Smith’s Hugo Weaving flits much more dangerously into the unintentionally comic arena; it’s bad enough that he toys with a dodgy Asian look in the futuristic chapter, but he also does a Wachowski for his modern-day role, swapping sexes to become a somewhat dodgy-looking nurse. It’s the tribal chapter which offers up his most effective role, however, playing a cross between the Wicked Witch of the West and the Devil himself, in a way that creeps right up on you as the story progresses.

All in all the idea of cross-pollinating different characters across different eras only using the same actors is daring and unique, and, even if it is not wholly effective, you’ll never quite see anything like it. (Also, just a nod to all the outrage over so-called ‘yellow-face’ racist transformations; I think the idea of asian-ifying many of the actors in the future-set chapters was anything but racist: it showed a very realistic look at the future breed of blended races, where East Asia was clearly a frontrunner in society, something which films have posited ever since the steam-punk of neo-Tokyo/LA in Blade Runner).

As a whole, Cloud Atlas remains defined by one single word: ambitious. If you can hold onto this, you will likely find a great deal to admire about the piece, notwithstanding the parts that don’t work; accepting that the ethnic transformations across some of the eras are sometimes ill-advised – you will probably see the daring concept behind it all, appreciate the sweeping themes and grand structure, and revel in the largely immensely satisfying epic end result. If you think too hard about the piece, the attempt to build a meaningful core becomes frustrating through the in-your-face subtext; the contrived transformations pull you out of the piece; and the weaker tales pull down the greater whole. But the trick is to allow Cloud Atlas to sweep over you and just accept it as a mostly impressive, unquestionably ambitious sci-fi epic. There’s no doubt about one thing: you have to see it.