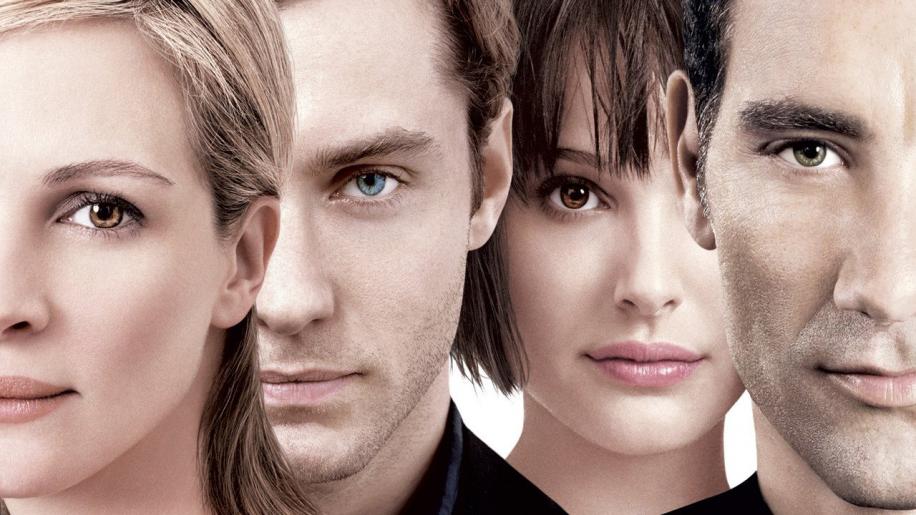 Closer is presented with a 1.85:1 aspect ratio anamorphically enhanced high definition Superbit transfer that is excellent. The detail is consistently superb and, even if some scenes focus only on key characters and let the background become softer, this is entirely intentional. There is a little edge enhancement but it is barely noticeable. Similarly there are some scenes with slight grain but it is never an issue. The colours are bright and vivid and the colour scheme itself is fairly broad, with solid, deep blacks. There are no noticeable defects or scratches to the transfer and it generally presents the movie extremely well. Given the largely close and personal content, the 1.85:1 ratio seems perfectly chosen and this transfer is very deserving of its Superbit moniker. Closer gets the deluxe treatment in the sound department with myriad options. The leading track is a powerful DTS mix that is remarkably throaty considering the rather limited content. Ok, so there are no sound effects, and there is rarely any room for bass, but the conversations are right in your face and always suitably directional. This is an entirely dialogue-driven affair and, whilst some might argue that it lacks anything deserving of such a glorious sound presentation, I think that it gives the drama so much more impact. The soundtrack also gets to shine at key moments. Although the DTS track is the more potent, the choice of content means that the Dolby 5.1 track is nearly identical. There is also a French dubbed Dolby 2.0 track and subtitle options in both English and French. There is only one real extra - the music video to the title track “The Blower's Daughter”, performed by Damien Rice. It is very David Gray, and is perfectly suited to this kind of drama. There are also a whole bunch of previews, some of which play on disc start-up, but all of which are available from the menu. There are trailers for Guess Who, Bewitched, Spanglish, Hitch, The House of Flying Daggers, The Woodsman, Being Julia, A Love Song For Bobby Long and Closer itself. Although some of those films are quite good, they are not all particularly well-chosen given the main feature. And it's not exactly much in the way of extras is it? I guess we have to bow down to the capacity of the DVD in the face of such high audio and visual specifications, but I'd have happily swapped an audio track for a commentary, a cast featurette and some deleted scenes (although we are never likely to see any more of Natalie, however much some might wish it to happen). Shame is, now the rest will be on the two-disc edition that will be breaking into your wallet six months down the line no doubt. Mark my words.

This is a brilliant film and a technically fantastic disc, let down slightly by an expected but nonetheless disappointing lack of extras. Considering that is basically constructed around four intermingling characters and their discussions about life, it is a remarkably powerful and gripping affair and one of the most well-acted, well-written movies that I have ever seen. There is something here for everybody to relate to - those who cheat, those who are cheated on and those who do both. I highly recommend it.