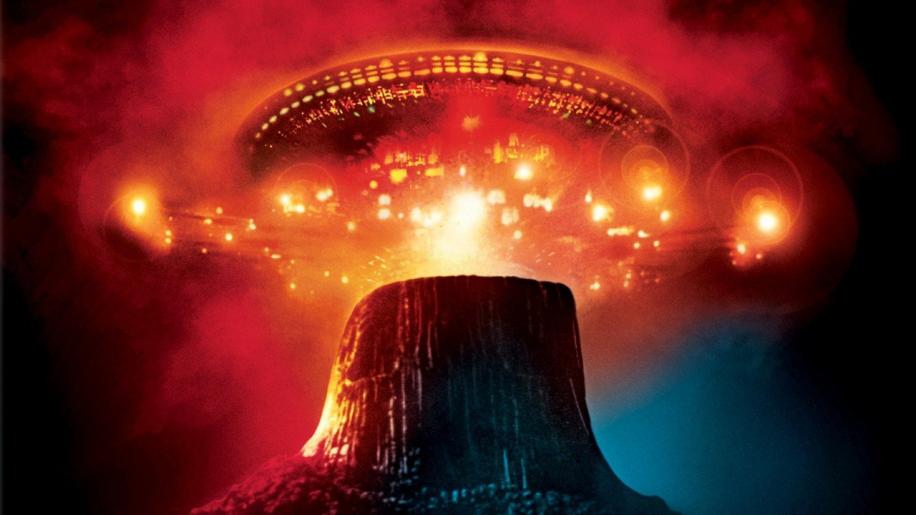 During production of the altogether inspired Jaws Spielberg was continuing to work on the script for what would turn out to be his next feature, Close Encounters of the Third Kind. Most will know this 1977 story by now, but for those who don't here's a brief synopsis...

Roy's (Richard Dreyfuss) is a standard working man, a family guy with all the issues that come along with it; little time on his hands, demanding children, loving wife. Roy's called out by his work to investigate a local power-cut, on stopping to read a map and get his bearings his truck cuts out and is overcome by a powerful bright light. Roy is obviously shaken a little. Strange occurrences start appearing all over the State with brightly coloured, unexplainable, objects flying around at will.

Roy and others like him, notably Gillian (Melinda Dillon), seem to become infatuated by the memory of these UFOs. Gillian has reason to, her son appears to have been abducted by these strange forces; Roy on the other hand cannot put his finger on why he must peruse this course, all he knows is he is compelled to do so. Understandably Roy's infatuation breaks his family apart, his wife Ronnie (Teri Garr), can no longer stand the strain of Roy building a multitude of volcano type objects in their house. He is fired from his job, the relationship he has with his children deteriorates.

Driven on by forces he cannot understand Roy learns that the mountain he continually imagines exists. He and Gillian join forces to find out what is behind this mystery and so begins for them an adventure of a lifetime.

Hot on the heels of Jaws, when Spielberg was a man any studio would have thrown money at, he dusted down a script he had been working on for some time. Sci-Fi was in the ascendancy and the time was right for an intelligent movie about contact with an alien species. We see Spielberg superbly navigate the main actors in the film, Roy and Gillian, into situations not of their own choosing but those which they have no option other than to follow. Dreyfuss gives over a credible performance as a man out of his depth spiralling into a world he cannot understand. Dillon on the other hand provides a more dramatic role as someone who is ultimately horrified by what she has experienced and continually adrift as she searches for her abducted son.

A sense of wonderment comes over Roy as he takes on his travels; he is like the small child, a sponge, very trusting of where this pathh will take him and willing to explore every avenue with little regard for the ultimate outcome. This is in complete contrast to the feelings Spielberg tries to get over when Dillon and her on screen son, Barry (Cary Guffey), are in their house; there is no wonderment here apart from that shown by the child Barry. Contrast this with the absolute fear shown by Dillon once the visitors come knocking at her door. Spielberg introduces these two polarised emotions well, the viewer not really knowing if the ultimate end of this trip will result in joy or sorrow for humanity.

Also included with this feature is a great sense of realism, Roy comes across particularly well as you or anyone of your neighbours... the everyman as Spielberg puts it. Also a lot of technical research went into the pre production including advice, and an on screen cameo performance, from J. Allen Hynek who once headed the US funded Project Blue Book which was designed to discredit the numerous sightings of unexplainable objects. Hynek certainly did discredit most but there were a few sightings by professionals Hynek regarded as serious and even he could not come up with a reasonable explaination as to what they were. Eventually Hynek changed sides and from being a sceptic became a person who acknowledged the possibility that something like this could and probably was happening.

Another aspect of the movie, which lends weight to the storyline, is the history it incorporates. We are shown a squadron of fighters that went missing in 1945 and a ship, the S.S. Cotopaxi, which vanished from sight in 1925. Both reappear, unexplained and both add the air of credibility to the feature as a whole. The only item here which let's this down is the Spielbergian sugariness where the fleeing small UFOs are followed by that little red cute one, obviously the baby of the group. Special effects, driven by 2001 Douglas Trumbull himself, at the time were state of the art and still to this day are more than acceptable.

All in all this is a good watch; an enjoyable, mysterious ride, which captivates the viewer from the absolute moment the film hits the screen. Never once letting go of your attention at times it's an edge of the seat, true roller coaster of a ride; at other times it's a relaxing, mystical piece altering the perception of the alien breed in the American culture. Comes highly recommended.