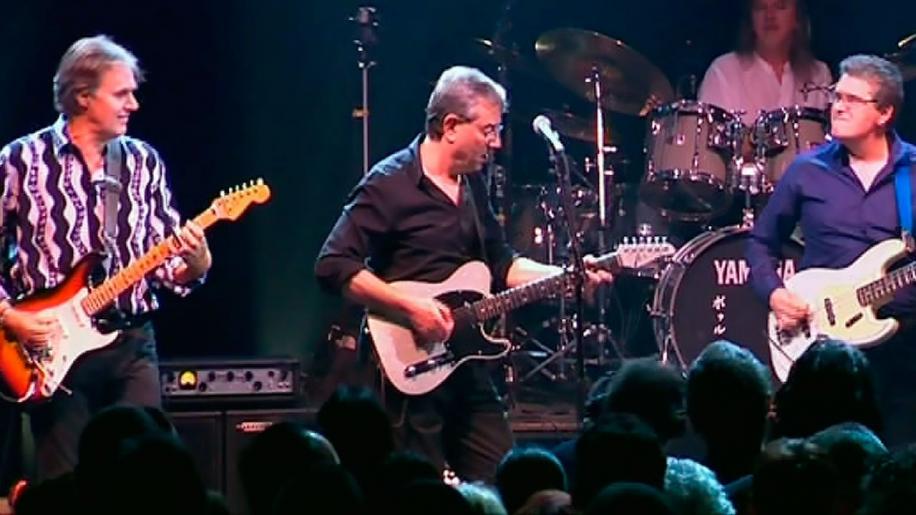 As one 8 foot Scotsman said recently..."Ladies and Gentlemen, please be upstanding for an explosion of 10cc!" and that about sums it up quite nicely thanks. 10cc were/are an incredible band from the early to mid 70s, formed by a set of friends who met at school/university. They spent their early career in the 60s writing songs for other bands and they had collaborations of their own under a number of different names. It was in 1972 though that the band formed as we best know them, 10cc, and released an ironic "Donna" to an unsuspecting public, it shot into the charts finally resting at the number 2 spot. So it began.

What we have on this disc is what must surely be the final version of 10cc. The band has gone through a number of changes, initially due to half of the creative team leaving in 1976. Lol Creme (that's Lol as is, not Laugh out Loud to all you youngsters!) and Kevin Godley departed to form their own successful partnership leaving Graham Gouldman and his own writing partner Eric Stewart to pick up the pieces and decide what to do. Eventually they decided to continue with the 10cc name enlisting the talents of Paul Burgess (drummer) and a year later Rick Fenn (lead guitar). '10cc' as they are now tour as this core with Mick Wilson on percussion/vocals and Mike Stevens on keyboard/sax.

Purists in the audience will soon cry out labelling this as a 10cc offering, but really it's rather pretty good. The band has the same sense of fun that the original members had and manage to impart this sense of adventure to the listening audience. The vocals predominantly by Mick Wilson come across as distinctive yet still bearing the hallmarks of those original songs played so many years ago. 10cc were renowned for their harmonies and even now with so many years past and a different line up this doesn't change either, expect and enjoy the harmonies coming from Gouldman and Fenn as they add extra depth to the songs being played.

Another aspect of 10cc which kept them in everyone's minds for the years in the 70s was their versatility. Every member of the band wrote the songs, Gouldman usually with Stewart and Creme usually with Godley. All of the band members played a wide variety of instruments; it really was a team effort all round. Now touring there are no more songs to write, all the material sung on stage was in the bag a long time ago however the band members as they are now still have that wide knowledge of musical instruments with Gouldman, Wilson and Stevens all playing different instruments at different times. So again the band have tried to keep true to their original roots and I for one would have to say that they do indeed succeed.

All of the tracks that you know and love are included in the set, the obscure "Life is a Minestrone" (Death is a Cold Lasagne), "Art for Art's Sake", the excellent "Donna", my own personal favourite "I'm Mandy Fly Me" with that irresistible guitar riff permeating the middle to end. Of course their most well known "I'm not in Love", no doubt many a couple's love song until they realise the lyrics, is beautifully presented the harmonics coming across rather well and the production on stage suiting the multi-layered nature of this individual track. As always they finish with the storming "Rubber Bullets" and what a way to end a concert, like the best of them leave them wanting more; Rubber Bullets always has this effect, it means the band and audience go out on a high note. It's a tried and trusted formula so why change? It worked in the 70s and it works now so well.

Interspersed during this tour of 10cc's greatest hits are a number of tracks that Gouldman himself wrote for others dating the 60s, including "For Your Love" written for The Yardbirds and "Bus Stop" and "Look Through Any Window" both of which were written for The Hollies. But there's still more, the Gizmatron alas is nowhere to be seen on "Old Wild Men" probably just as well though as no one could probably play it these days; and there's also a current Gouldman track "beautifulloser.com" which he co-wrote with Kevin Godley when they teamed up recently just for the fun of it and where Kevin Godley himself comes on stage to sing.

It all adds up to a fantastic mix of a disc, the old favourites sung and performed in a way which never once make you wince and which do in fact take those of us old enough to remember, back in time somewhat. A good disc for any 10cc fan to have in their collection to see how the band has evolved from the late 1970s. Excellent stuff.