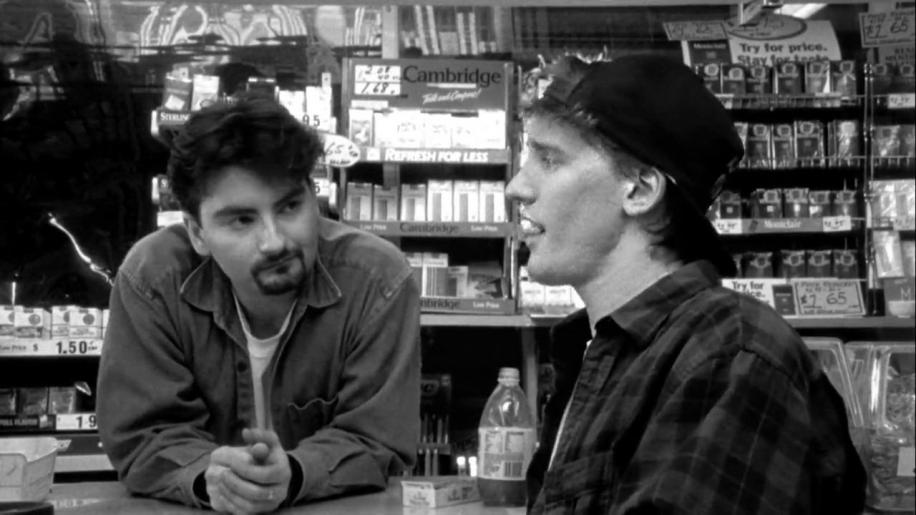 Filmed in black and white on grainy 16mm film, Clerks definitely had its disadvantages before it was ever released on DVD. When it was originally released (as a letterboxed 1.78:1 widescreen DVD) the results where not astounding. For this Tenth Anniversary outing we have a whole new transfer. Anamorphically enhanced, cleaned up and presented in its correct aspect ratio, the picture quality is still not going to compete with the mega-million blockbusters that we see so often on DVD, nor should it try, but this is definitely a major improvement on what we've had before. Whilst retaining its grainy, film-noire look the picture is a revelation after my old VHS and latterly letterboxed DVD releases. Contrast is still a little bit off and the black level is decidedly variable but if these had been corrected its debatable if this would still have been Kevin Smith's Clerks. A very good job has also been made on the disc encoding, despite the sea of grain there are no obvious problems with macroblocking or edge enhancement. This being a black and white movie, there are no colour problems to report on either. Originally recorded in mono, the version on this disc has been remixed to Dolby Digital 5.1 (448Kbps) and also carries a French mono track. Even so, this is not a movie to try out that new 7.1 sound system you've just bought. Whilst, obviously, being more expansive than the original mono soundtrack, the new mix is still very centre-heavy with most effects and music being firmly anchored to the front soundstage. Despite this, it has a much better dynamic range than the previous, mono, version. Music has more power and presence, with dialogue now clear and easier to understand. If, like me, you want or need to go through all the extras present here you had better set a fair chunk of time aside. There simply isn't enough space here (nor would you read on for long enough) for me to describe in detail all of the features present.

Split over the three discs included in the pack there are massive amounts of appropriate, amusing and relevant information and entertainment to be had.

Starting with disc 1 our first extra is the classic commentary. Recorded back in 1995 for the movie's laserdisc release, its one of, if not the, best commentaries I've heard. Featuring Kevin Smith, producer Scott Mosier (who also has several cameo roles in the movie), Brian O'Halloran (Dante), Jason Mewes (who sounds rather out of it, making him sound more like Jay than he'd probably like) and Walter Flanagan (who, as I mentioned above, had several roles) the track is chock full of humour, recollections and a veritable guide to guerrilla filmmaking. This really should be a compulsory track for anyone thinking of making their own movie as Smith discusses every trick that he used in order to get this movie made, excellent.

Next up we have a switchable “Enhanced Playback Track”. This is only the second time I've seen this sort of option (the previous one being in “Fargo”). If enabled, a subtitle track is overlayed on the movie bringing up facts about the movie “pop up video” style. Long time Clerks fans won't find that much here that will come as a surprise to them but newcomers will find some of the behind the scenes information of interest. Of more interest to Clerks fans is “Lost Scene”. In the movie we see Randal and Dante arrive at the funeral parlour and then we cut to them making a hasty exit pursued by the other mourners. Here, following an introduction by Kevin Smith and Scott Mosier, we have an animated presentation of the scene that was never filmed since the budget wouldn't stretch to the construction of the set! Available as is or inserted its rightful place in the movie (presented via seamless branching) the short features the original actors voices and some pretty good animation (those of you familiar with Clerks: Uncut will know what to expect here). Seen in place in the movie it adds an almost Terry Gilliam feel as Dante and Randal enter the funeral parlour, the animation fades from black and white to colour and then they leave as black and white live footage again. “The Flying Car” is a short that was produced for the Jay Leno show. Reuniting Dante and Randal we have a sequence where the duo are stuck in a traffic jam and Randal proceeds to wind Dante up over a mythical flying car scenario. This is a top notch short and really does make the prospect of catching up with the characters in a Clerks 2 something to look forward to. Continuing disc one (I told you to set aside some time) Jay and Silent Bob fans will be happy to know that all of the Jay and Silent Bob MTV Shorts (totalling 17 minutes or so along with an introduction by Kevin Smith) are present and correct, whilst more traditional extras are available in the form of the movies theatrical trailer, a music video for Soul Asylum's ”Can't Even Tell” , restoration featurettes on the new transfer made for the DVD and the original auditions including those of Brian O'Halloran and Jeff Anderson.

Moving on to disc 2 we have a quite amazing extra, another movie! Well, not quite. Presented here is the unrestored “First Cut” of the movie. Although slightly rough picture wise, this is fascinating viewing (especially since few people will have seen it before). Featuring a great many deleted scenes (and a very dark ending) it's interesting to observe the differences in both the flow of the movie and in the deleted scenes when compared with the original cut. Also available are an optional audio (and video) commentary featuring most of the original cast although, sadly, this is not an “mst3k”-style overlayed commentary as was featured on the “Ghostbusters” SE..

Disc 3 starts off with a terrific documentary, “The Snowball Effect” (which is possibly an in joke for fans). This covers the entire production of the movie and (in a refreshing change from most making of documentaries) reveals the whole process from the view of a young filmmaker just starting out. Featuring recent interviews with the cast and crew, archive film and photographs and way too many good points to summarise here, this is a must see documentary. Featured separately on disc 3 are around 40 minutes plus of cut interviews and other footage from the documentary. With enough interviews and other footage to make another excellent show, Smith et al should be applauded for providing the excised scenes on the disc for us to pore over. ”Mae Day: The Crumbling Of A Documentary” is a school project film made by Smith. When his original idea for a documentary fell through he, instead, made a documentary about his failed documentary. “10th Anniversary Q&A” features Kevin Smith, accompanied by several members of the original cast and crew, in a “live” interview situation where they respond to questions from an audience. Apparently unscripted and unplanned this is both humorous and informative with the “live” atmosphere of the crowd adding to the fun. Rounding out the, extraordinary, package of extras are the (almost compulsory) photo gallery as well as a number of journal entries made by Smith before, during and after the production of the movie. DVD Rom owners can also spin up the disc in their (PC only) drives in order to enjoy an enhanced playback track and Kevin smith's original 168 page first draft of the screenplay. Phew! Kevin Smith was recently quoted as saying that, after working on this box set for almost a year, he fell in love with the characters again. So much so that he is working on the script for Clerks 2 (apparently titled “The Passion of the Clerks”) and catching up with Dante and Randal ten years on. Working my way through the lovingly crafted extras it's not difficult to appreciate this point of view. If you're a fan, or you loved Mallrats, or just want to see what a no-budget moviemaker can do then you have to have this in your collection. It's stupid, crude, puerile and sometimes offensive, but it's also sincere, laugh out loud funny in parts and definitely a must-have. Recommended, buy it now..