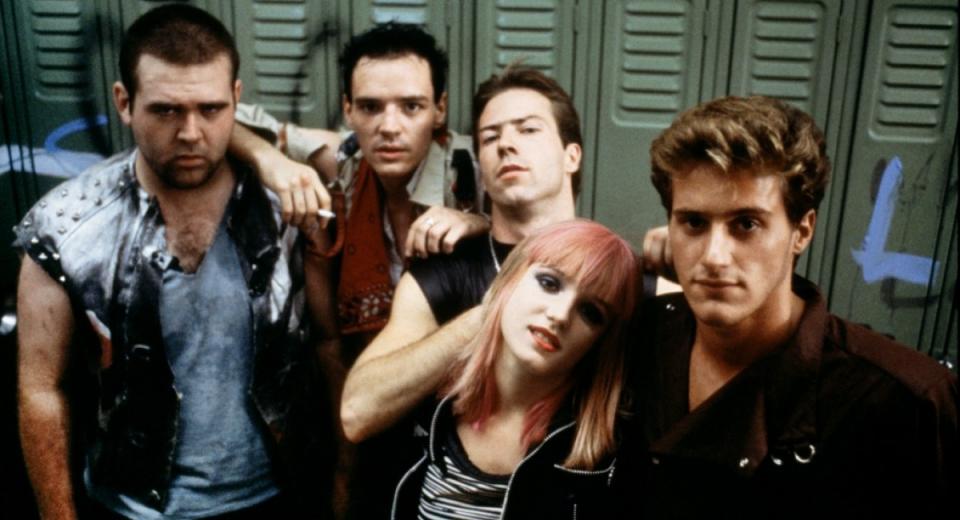 We are the future! And nothing can stop us! Sadly it seems so, and nothing has…

1984. Over thirty years ago. A decade of decadence and one that was prophesised by George Orwell with the phrase 'Big Brother is watching you'. Whilst that did not come to pass then (though it has now!) another startling prediction was wrought from tonight’s feature – that of school children out of control, where a class room is more a battlefield and where students and staff are at war. Back in 1982, when the film first hit theatres there were already cases of student violence, overcrowding, vandalism and weapon control; and now it is even more prevalent with the added horror of massacres thrown into the melting pot.
Director Mark Lester maintains his film was a warning (one that has come to pass) but it was also a neat idea that hit a relevant mark and one that not only had relevance on its first showing but also some thirty years later. Despite the music, costumes and styles which do tend to date the picture, the story could have been from today – boiling down to rape/revenge or survival – but placing it in the heady context of High school not only adds relevance but also urban horror. And thus Class of 1984 taps into a mix of genres but comes out feeling fresh and has easily maintained its cult notoriety; the fact that it is also quite prophetic is the icing on the cake. The disc presents a widescreen 1.78:1 1080p transfer using the AVC codec and is Region locked to A.

Proudly emblazoned on the packaging Scream!Factory state the image is a “new high definition transfer of the film from the interpositive”, and whilst that might be true the image, being for the most part bright and detailed, does have its issues.

Detail is pretty good, skin as a reasonable texture, punk hairdos are quite defiant, while their clothing has decent enough weave; the tweed of the teachers clothes compared to the leather and torn jeans of the kids being well seen. Background detail, especially that of the vandalism of the school, graffiti for example, is sharp with many instances being clearly readable. Even the soft focus filming in some scenes does not distract.


“new high definition transfer of the film from the interpositive”

Colouring is pretty standard fair for the age of the film, it’s not particularly rich or vivid, but there is little wrong. The blues and reds of the kids’ hair colours as well as the graffiti never bleed and have decent enough depth. Skin colour is very natural and makeup (excluding the over the top necessary excesses of the punks) is never overtly visible. The entire pallet is quite dour, representing the inner city pollution, so you won’t expect to see anything vibrant; even the sky is grey.

Contrast and brightness are set to give reasonable blacks, though the film rarely uses them, even in the dimly lit corridors of the climax, there is nothing absolute. This means that the picture seldom has any real punch and depth of frame is very limited, compounded by the occasional bout of softness (not soft focus).

Digitally there were no compression problems, edge enhancement or other issues. However, there is still plenty of damage to content with, scratches and pops and the occasional reel swap mark are visible. Grain, though, is quite consistent and never intrudes giving a nice organic feel to the piece. Two tracks to choose from: English DST-HD MA 5.1 or 2.0; I went with the surround track. Whilst the picture is generally good, the surround track has a very artificial feel to it, which reminded me very much of the old Anchor Bay trick of pumping the same track into all five channels – it’s not that bad but it’s something that I haven’t come across with Blu-ray.

Dialogue is well layered into the mix, sounds very natural and is held to the centre channel. The score makes use of all the speakers and appears to have reasonable separation. Bass is rather limited, though, both in the score and effects, and whist the sub never turned off, it barely registered anything except in the more action orientated scenes. It is the school day corridor scenes that, for me, have the greatest issue; they make use of the surrounds to give the background chatter and hustle in a busy school, but it has a strange echo-y effect that makes is sound rather unnatural. Now, checking the 2.0 track the same is audible, but much lower in the mix, leading to my suspicion that the surround is being forced rather than coming from any natural remixing. It doesn’t spoil the track, mind, indeed it is quite lively, but when you are used to a natural surround experience, this one just seems off. Audio Commentary – With director Mark Lester moderated by Perry Martin and previously available on the Anchor Bay DVD. Plenty of information delivered here by Lester in which he discusses pretty much everything you need to know about the shooting, backstory and production of the film. Due to its nature a lot of what is covered here is mentioned elsewhere too!
Blood and Blackboards – Half hour featurette from Anchor Bay (also previously on their DVD) that features plenty of interview material with those involved with the making of the film; Anchor Bay are some of the best in the business when making these features and this one is no exception.
Girls Next Door – First of the newly recorded material and is fifteen minute interviews with Lisa Langlois and Erin Noble. Lisa is overjoyed to talk about the film and elaborates on plenty of subjects, and while Erin is somewhat more restrained her talk is nevertheless just as engaging – spoilt only by the terrible sound quality for her.
History Repeats Itself – Newly recorded twenty minute interviews with Mark Lester and composer Lalo Schifrin; more discussion of the film in general and a ‘new’ story about the distribution from Lester. Would like to have heard a little more from Schifrin as this was rather skewed towards the director.
Do What You Love – Enchanting! A thirty minute interview with Perry King who talks about the films he’s made interspersed with his musings on life; like listening to a grandfather regale you about his life - really, really interesting.
Trailers and TV Spots
Stills Gallery I first saw Class of 1984 on unregulated (probably pirated) VHS around 1984 and it has stayed with me ever since. It is the film's innate ability to get under your skin that makes it such a thrilling, horrific and fascinating watch. It’s like seeing a car crash on a motorway; you can’t look away. And the fact that it has deeply embedded messages elevates it above the exploitation movie it so clearly is.

For what is a grubby early eighties film with a one sentence premise, Class of 1984 has certainly survived the test of time. By tapping into a social anxiety, that of unruly kids running riot (that have been a staple through filmic history) where it manages to rise above its exploitative roots is with its setting, its characterisation (with respect to the leads) and its pure naked verve.


Scream! have really looked after this grubby feature

Scream! Factory’s Collector’s edition is a great little buy; the picture is very decent being bright and detailed even if it does suffer a little from damage, and the sound is quite a lively affair if you can get past the occasional artificial sound it sometimes produces. The extras are quite plentiful being a mixture of old and new and for such a little film, Scream! have really looked after this grubby feature that has defied the test of time and remains as popular and as relevant today as ever it was.