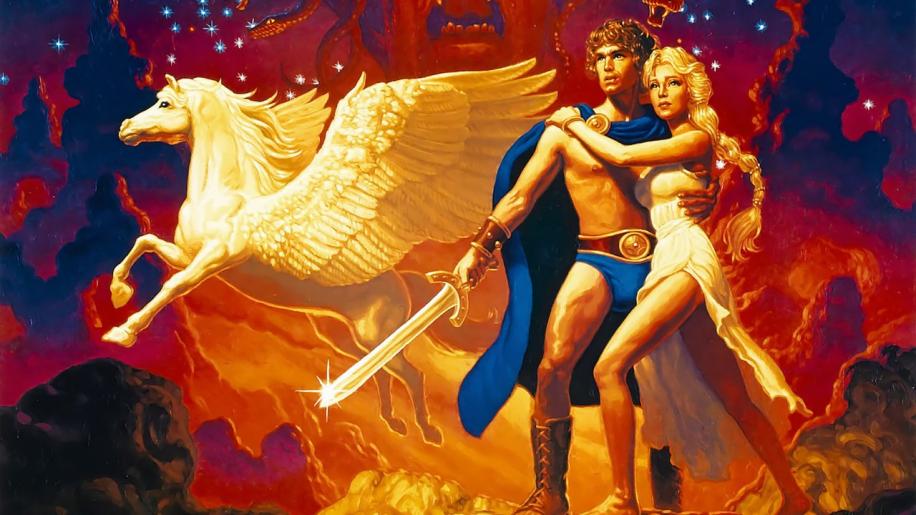 Sometimes I despair of the modern generation. On Saturday night, I updated my twitter status “Watching Clash of the Titans on Blu for review purposes. Really looking forward to this.”. I promptly got a reply asking me how I could be watching it when it wasn't even out in the cinema until next month. I enlighten said person by explaining that this was the original film. They apparently didn't have a clue that the version making its way into cinemas was a remake.

Of course the remake, it goes without saying, will be chock full of amazing CGI and well staged action sequences. Of that I have no doubt. But when you hear the makers state “Why have one flying horse when you can have a herd”, sometimes you just despair of modern films. The original was showcase for the mighty Ray Harryhousen and his stop-motion animation. But he was a special effects guru who understood that just sometimes, less is more.

The plot, such as it is, is paper-thin. It delves into the realm of Greek mythology - an area which I am surprised cinema hasn't exploited more. Zeus (Lawrence Olivier) is a bit of a ladies-God, frequently adapting disguises in order to “ravish” beautiful maidens. Unfortunately, one of these ladies becomes pregnant by him and gives birth to a perfect son called Perseus (Harry Hamlin). Unfortunately Perseus' human father soon realises the child isn't his, and locks the baby and his mother in a coffin before sending them out to sea. Zeus rescues them, and sends them to a small island where they are washed up and Perseus grows into a fine young man, the pride of his father.

Unfortunately, Zeus also had another son Calibos with the Goddess Thetis (Maggie Smith). When Calibos hunted the winged horses almost to extinction, leaving only Pegasus behind, Zeus punished him by turning him into an ugly beast. Formerly betrothed to Andromeda (Judi Bowker), she turned Calibos down when he was transformed and then eventually succumbs to Perseus' proposal of marriage. At this point, however, Thetis appears and sets Perseus a task. The mighty Kraken will destroy Andromeda's town unless he stops it. The only way he can do this is by getting it to look at the head of Medusa.

When written down, this plot sounds paper-thin and that is because it is! However, Clash of the Titans was mainly conceived to be a showcase for the work of Ray Harryhausen. King of stop-motion animation and inspiration to the likes of Spielberg, Cameron, and Dante - Harryhausen had illuminated some classics of the cinema with his work. Unfortunately, even at the time that this was filmed (the late seventies) cinema was already beginning to leave him behind - the likes of Star Wars moving model work on to a new plane. Harryhausen wanted to show the world that his techniques could still impress, and the release of this film confirmed that his creations could still astound and impress. Sadly, looking back now as a modern audience the SFX looks incredibly dated. But the film has enough scope of imagination to still be worthy of viewing.

One of the major reasons for this is the acting talent on display. The names listed in the cast were not just simply stars of the time. People like Olivier, Smith, Sian Philips, Burgess Meredith and others were well-loved actors that the word icon would not be out of place describing. And they all do a stellar job of bringing characters that exist in a world beyond comprehension to life. It may be true that Olivier does rather err on the side of hamminess - relishing the chance to overact. But the rest of the cast do an excellent job of their roles, with Meredith in particular coming across well as Perseus' mentor.

So, in a nutshell this is the strength and weakness of the film summed up perfectly. There are many positives to take from a viewing of the film. Although the story is paper thin, the plot is still involving and manages to suck the viewer totally into a world that we could never comprehend. The performances are excellent, actors treating the material with respect and playing their roles straight. But what lets it down today is the special effects. Using a technique that was already dated when the film was released, and now nearly 30 years later looks positively antiquated, this aspect of the film really lets the film down. Stop motion characters look jerky and do not integrate well with the action going on around them. The actual models themselves are stunning - the level of detail astounds and they look about as realistic as they can be in isolation. It is when they have to interact with the world around them that things start to look a little ropey.

Now, of course if you are a fan of the film from way back as I am, this is really not likely to bother you. The chance to revisit the world that so impressed you as a child, but now rendered in high definition and in the home - you are likely to be in seventh heaven. The film is most certainly good enough to stand repeated viewings. However, I am sad to report that this is unlikely to impress a whole new generation of fans. Those children who are used to the stunning, state of the art, CGI effects of today's modern blockbusters are likely to find this rather off-putting. And whilst the story is enough to engage adults and old fans, I feel that it is a little slow and for this reason is less likely to engage the children of today who's attention spans tend to be rather lacking. This, admittedly, says rather more about the children of today than the quality of the film under discussion - but it is certainly a factor that should be noted.

So, there we have it. Clash of the Titans is still a wonderous film for those of a certain age who remember it fondly. Revisiting it again all these years later was a fantastic experience which I enjoyed immensely, and I am looking forward to being able to watch again and again now it is in my collection. If you are thinking of buying it for the younger generation, maybe in preparation for the remake - you may want to think a bit more carefully about the process. They don't make 'em like this any more, mores the pity. Unfortunately, I suspect they don't make audiences like they did in the 1980s either.