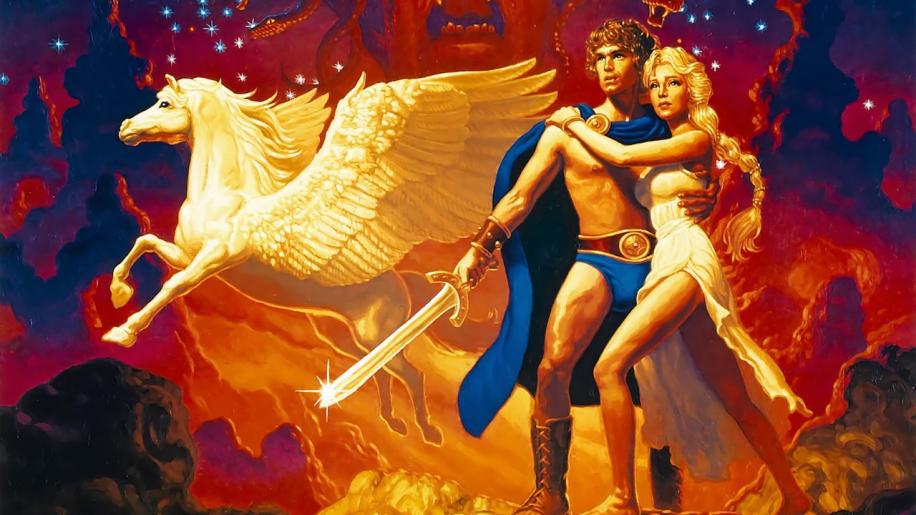 Clash of the Titans (1981) is one of my all time childhood favourites. I'll make no bones about it but I just loved this film when it first came out.

Nothing has changed since as it is just the sort of movie that can whisk me away into a fantastical and mythical world of make believe. I could re-run this a thousand times over and I would still never tire of it.

Now time waits for no one; no man, no beast and least of all for a film. Some films age gracefully and others not quite so. The passage of time has indeed dated the special effects but it's the synergy of the story, the fusion of the celluloid and the frames imprinted upon it that have left the mark on many a juvenile memory of that era.

Desmond Davis's direction brought together Ray Harryhausen's imaginative and creative creatures for the last time and pitted them against backdrops that echoed the mythical mysteries of ancient Greece. Harryhausen's mastery of effects in the Sinbad movies were great and Jason and The Argonauts was superb but Clash of the Titans was to my mind a truly worthy final masterpiece for the master of stop motion.

Of course if you skip forward 30 years the 2010 modern day remake of the film will no doubt have more CGI than you can care to shake the proverbial stick at. It would be pointless trying to compare the two on technical terms but in its own quaint way the 1981 movie's special effects were actually not considered cutting edge when it first came out anyway. Star Wars, for example had introduced computer motion capture and a level of model making that enabled a seemless blending of real and animation never before possible. Titans was therefore always going to be Harryhausen's swansong for other reasons. Quite simply this is a classic film and will remain forever as just that; a classic.

So the effects have of course dated quite badly but when it comes to Greek mythology and downright boyhood fantasy adventure I can think of no other better peers. From the opening scenes of a young princess and child being cast into the seas and the misty lofts of Mount Olympus you immediately sense the paramount importance given to the Gods in ancient Greek culture.

Lawrence Olivier plays Zeus with a conviction that would have you shudder with obedience displaying his vice like command over both mortals and Gods alike. The Gods certainly had their own games of course. The world was their playground and mere mortals were nothing other than the pawns used to play them out.

As ancient myths go the Gods were also known to have their indiscretions. From time to time a visit to earth to meet with mortals of their liking would result in offspring. These children were born as mortals but were also considered as demi-gods. The caring hand extended by their parentage would have them live colourful and privileged lives.

Perseus (Harry Hamilton) is the result of Zeus's one such indiscretion with Princess Danae. Her father, King Acrisius of Argos is ashamed of his daughter and casts her along with her illegitimate son upon the open seas in disgust. Zeus is outraged by the action and orders Poseidon to summon the Kraken and destroy the land of Argos as punishment.

Of course Perseus being the son of Zeus is to be saved from all this plight. Both he and his mother are given safe passage to the island of Seriphos. There, they are allowed to live their lives in peace. Over time, Perseus then grows into a fine young specimen of a man.

However, the rivalry amongst the Gods would see that he should not have an easy ride. When Calibos, the son of Sea Goddess Thetis (Maggie Smith) is hideously transformed by Zeus for destroying his favourite flock of flying horses, Thetis is a woman scorned. She places her hand over Perseus to land him in the troubled city of Joppa in the Kingdom of Phoenicia. So begins a tale of the grandest adventure and a romantic valour far removed from that of today. This is all about the mythical stories surrounding the ancient Greeks.

Perseus awakens in a disused amphitheatre somewhere near Joppa where he meets a scholar called Ammon (Burgess Meredith). When three divine gifts mysteriously appear Ammon enlightens him in the ways of the Gods. Zeus takes favour upon his favourite son and gifts him a sword so mighty that it can cut through marble without leaving the slightest blemish on the blade, a shield so coveted that it will guard his life against all evil and a helmet that will render its wearer truly invisible. Such gifts can only mean that Perseus has a destiny to fulfil.

The once prosperous city of Joppa is now plagued by the Lord of the Marsh, Calibos. The beautiful Andromeda (Judi Bowker) was betrothed to Calibos but the hideous transformation ordered by Zeus had left him as an outcast. As an act of revenge the Goddess Thetis vowed that Andromeda was never to marry anyone else. Any potential suitor had to solve a series of vexing and unfathomable riddles in trying to win her hand. Of course no one could unravel them and death would befall all of those who tried and failed, prince and pauper alike.

Taken in by Andromeda's ravishing beauty Perseus sets himself upon a mission to solve the riddle that has been served upon him. It turns out that the actual solution is a relatively easy task but winning her hand in marriage is anything but. A foolish blasphemy by her mother in the temple of Thetis whilst pronouncing the matrimony angers the Goddess even further. Thetis demands the sacrifice of Andromeda in return for the people of Joppa to be spared. Andromeda has to be offered to the Kraken on the eve of the longest day.

The Kraken was one of the most feared titans and no mortal or army was able to defeat him. However there was one other titan who had the powers to paralyse all that lay in front of her. Medusa, once a very beautiful priestess to Aphrodite had long been transformed into a venomous Gorgon. Every living thing that had the misfortune to looks into her eyes was instantly turned to stone.

Ammon takes Perseus to visit the Stygian Witches who possess great prophetic powers and the all seeing eye. They inform him that nothing other than the head of the Gorgon can possibly help him in defeating the Kraken. In many ways defeating Medusa is as perilously a task as that of confronting the Kraken himself.

Now if there's a sequence in this movie that sticks in the memory more than any other it all revolves around the scenes between Perseus and Medusa. The first time I ever saw this movie I remember being terrified at the thought of the snake headed creature turning anyone into stone in her lair. Obviously after repeated viewings it has long since lost the spine tingling fear it once induced but at the first ask it was certainly most scary.

Harryhausen was in his absolute element when he created all these creatures. Clash of the Titans had far more of them, more so than any other of his movies. All of his skills are brought to bear in what can only be considered the grand finale of a wonderful career. We are treated to Pegasus the last of the flying horses, Bubo a mechanical owl sent by Athena, giant scorpions, the Kraken, Medusa and all manner of fantastical creatures like the Dioskilos thrown into the mix.

Although in terms of special effects the film may have dated over a period of three decades, it's still a film that oozes evergreen charm and appeal. No doubt the 2010 version will wow the socks off all newcomers by using a different tack. It may also perhaps revive considerable interest from those that enjoyed the original movie. How it fares in conjuring up the sort of magical and mystical fantasy and enchantment that the original did, we shall of course have to wait and see.

Clash of the Titans (1981) retains a certain nostalgic beauty. The original remains as good as it ever was and as far as I'm concerned it's definitely worthy of gracing any self respecting movie collection. This is stop motion infused with special effects and charming visual trickery to treat your imagination to a dose of the utterly fantastic. It may have been Ray Harryhausen's final movie but it was also his finest hour.