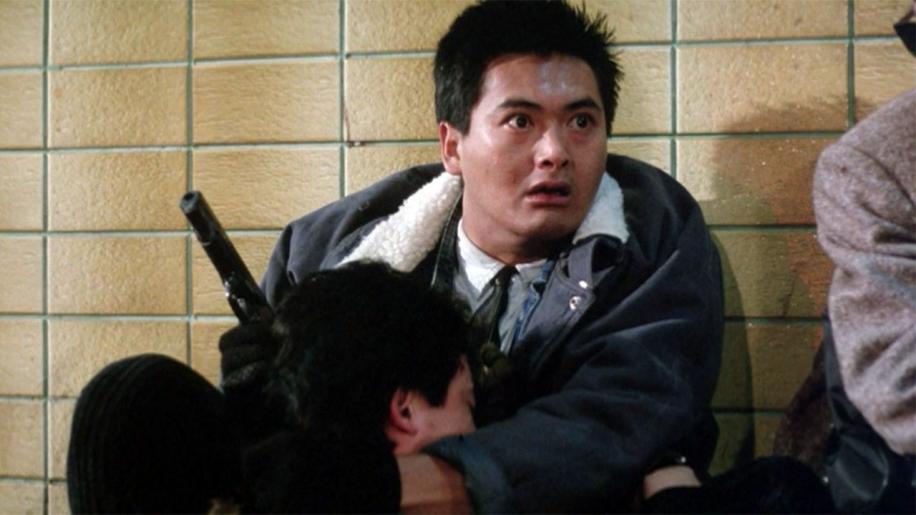 Let's get one thing straight. City on Fire is not Reservoir Dogs. In fact, as far as I can tell - aside from a few scattered elements - only the last ten minutes bare resemblance to Dogs. That said, those last few minutes are a blatant rip-off, borrowing scenes, actions and even dialogue straight from this movie. It is an affront for Tarantino to have made Dogs and not acknowledged this movie. To say that it was influenced by Asian cinema is simply the understatement of the decade.

Chow Yun Fat has been off our screens for a couple of years now - ever since the distinctly average Bulletproof Monk - but there are talks for him to return to one of his best roles ever, as Li Mu Bai, the hero in Crouching Tiger, Hidden Dragon. Of course, this may never happen, so in the meantime we have to make do with all of his old classics that are slowly appearing on DVD. Of his Hong Kong movies, my favourite has always been Hard Boiled, although I do understand the argument that The Killer, one of his other John Woo action movies, was superior. Before Hard Boiled, however, he had a couple of Ringo Lam collaborations. Lam is probably most famous for this, his 1987 groundbreaking movie, which he made with a relatively young - but not quite in his prime - Chow Yun Fat (although they reunited for 1992's Full Contact).

In City on Fire we first witness a brutal stabbing in the streets, soon finding out that the victim was an undercover policeman killed when his duplicity was uncovered. Now it is up to Chow Yun Fat's adventurously named cop, Chow, to replace him and go deep undercover to catch a bunch of jewellery thieves who also killed a cop during a bungled robbery. Haunted by the last time he went undercover, when he foolishly befriended one of the doomed crooks, he reluctantly agrees, even though his personal life is in tatters and his fiancée is on the brink of leaving the country with another man. On the run from his own police force - who think that he is an arms dealer - Chow finds more honour and loyalty working alongside Danny Lee's crook, Fu, and before he knows it, the lines are getting blurred again and he has to decide what side he is on.It is strange looking back on a film that is swiftly heading towards being twenty years old and critically appraising its script, acting and direction, because a great deal has changed over the last decade or so. Modern films - even films around the era of Woo's Hard Boiled - have come a great deal since the mid-eighties. Hong Kong, though perhaps ahead of its time in terms of improvisational techniques and low-budget action-film making, still had inherent low budgets that were noticeable in terms of production quality. This is no exception. The movie seems terribly dated, hackneyed, clichéd and sometimes utterly implausible. At one point Danny Lee's Fu fires what appears to be a standard issue Hong Kong police revolver (I'd be surprised if it was above .38 in calibre) at a cop car in the distance, causing it to flip and explode in mid-air). Now, I love Woo movies as much as the next person - and John Woo is inherently crazy when it comes to big bangs - but Ringo Lam just makes ridiculous things happen. It is unbelievable enough to have someone blow up a police car with a shotgun, let alone a pistol. And it doesn't stop there: the whole movie is stretched out with a dire romantic sub-plot where Chow gets to act like a real idiot - not the matchstick-chewing two-gun wielding master of cool we are used to at all - giggling, dancing like Chandler from Friends and goofing around as if it were natural for an extremely stressed undercover cop to turn into a Tellytubby during his time off. Danny Lee does a relatively good job, playing the roles straight as the leader of the robbers, but it is not until the final reel that we actually get to see some reasonably good acting - and by then it is almost too late. There is no relationship between the cop and crook, there has not been enough time for it to have been forged, so we are left having to pretend that we believe what is going on on-screen, mainly based on what we have seen in Reservoir Dogs where - much as it pains me to say it - Tarantino did a much better job with his characters.

Still, from a classic Hong Kong movie point of view, this is an indisputably important film in the heroic bloodshed genre, showcasing an early Mexican stand-off (at least in terms of crime movies), some distinctive action sequences, and an unusual performance from a youthful Chow Yun Fat. Maybe both Hollywood and Asian Cinema superseded this a long time ago with much more stylish, more action-packed, dramatic, well-scripted and well-acted efforts, but this is still the original mould by which many movies have gone by. In that way, it deserves some respect.