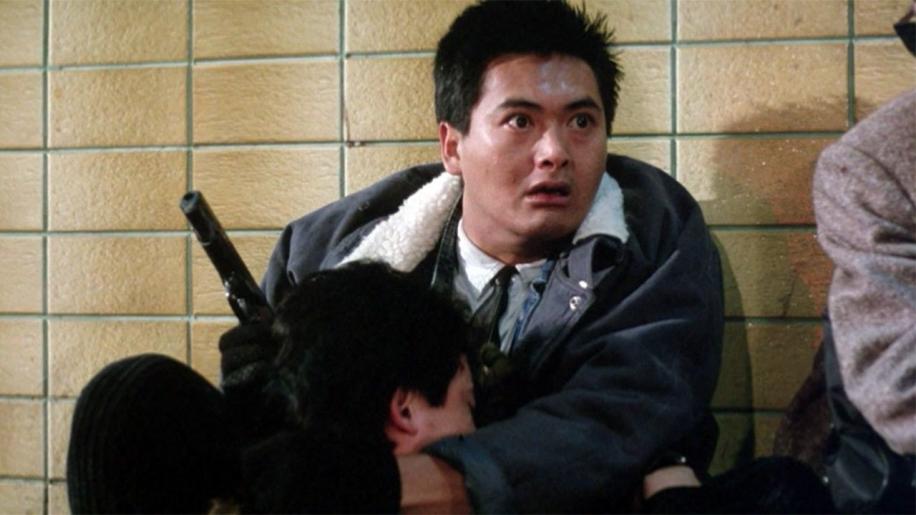 City on Fire comes presented in a pleasantly clean 1.85:1 aspect ratio anamorphically enhanced widescreen transfer. Considering its age and the budget of the production in the first place, this is a pretty good transfer. There is some decent detail on both distance and focussed close-up shots, and the picture is clean and clear of the dirt and scratches that you would perhaps expect considering the aforementioned material and its age. That said, on the downside, you can see some edge enhancement has been used to sort out some of the otherwise apparent softness, and the colours aren't all that good - occasionally seeming a little faded and lacklustre. Still, all things considered, this isn't a bad video presentation for the movie. City on Fire has been given a fairly decent (supposedly original, although some of it seemed slightly out-of-synch) Dolby Digital 5.1 Cantonese track. The vocals are always relatively clear - even when Chow Yun Fat is making stupid childish noises - and the whole mix is generally biased towards the frontal array. The score is quite dated, in particular the saxophone solos you would recognise from Hard Boiled and so forth, but it nominally sounds like a good effort - if you like that sort of thing. There aren't really many effects, but the brief action sequences do provide for a few gunshots and even the odd explosion. This is not a particularly diverse or directional track, but it is nevertheless above-average presentation for this movie. There are also optional English subtitles which are pretty flawless. First up there is the standard Hong Kong Legend commentary track by Asian cinema expert Bey Logan. Whether or not you like this guy - and personally I find his voice can get a little tiring after a while just because he talks like he is on speed - you have to respect the sheer amount he knows about these movies. Here he churns out facts, whether interesting or mundane, at a rate of knots. He picks up on actors and simply reels off their biographies and filmographies - revealing some quite funny titbits along the way - and simply never seems to take a moment to rest. Amidst a flurry of facts, we get to hear about the birth of the 'heroic bloodshed' genre, which basically includes stylised gunplay gangster movies, and how Woo and Lam instigated it all with A Better Tomorrow and City on Fire, respectively. It is another good commentary, but you have to be able to siphon out the information that you just don't need or don't want, from the information that is interesting to any fan of the film - like the film noir references, the use of Venetian blinds to signify a prison of the mind and so forth. His praise of Chow Yun Fat is well-deserved and he even reveals that Chow actually prefers his more comedic roles - having come from comedy TV before striking it big in films like this and his Woo collaborations. Luckily we get very little mention of Reservoir Dogs except, as it is relevant, during the final few minutes of action. Well worth a listen, but you may need a few pauses to catch up with what Logan says. (Unless you are the Scatman)
Then there is Portrait of Anger, 'an exclusive interview with acclaimed cinematographer Andrew Lau'. With a fairly hefty - at least for an interview - running time of twenty minutes, Lau talks (in Cantonese with fixed English subtitles) in detail of his upbringing, how he got into filmmaking and his success in cinema. With clips from some of his earlier Shaw Brothers collaborations, we hear about his early productions, leading eventually (after about five minutes) to his work on City on Fire. He explains the awe he felt for Ringo Lam at the time and how he wanted to strike out as being distinctive in his cinematography so that he could prove himself amongst his colleagues. This is a nice little interview, although at times it feels a little long-winded, where we get to learn about Lau's work on the movie, about his history up until the movie, and even a little about his more recent directorial efforts, the classic Infernal Affairs movies. We even get a couple of nice anecdotes about the production thrown into the mix.
Next up there is a twenty-give minute interview with Roy Cheung, entitled Long Arm of the Law. Cheung played one of the cops in the movie, although his part was nowhere near as prominent as that of the two leads, Chow Yun Fat and Danny Lee. Cheung explains how he got his big break in this movie - even though he did not know who Ringo Lam was at the time - and how he was taught by Lam to give the character a very individual personality. Amidst the seemingly random clips from the movie itself, he spends a great deal of time praising Lam, but does not have as much of interesting things to say as his colleague, Andrew Lau. Still, it is a nice inclusion on the disc.
Finally we get a bunch of trailers. First up there are some Hong Kong Legends trailers: The John Woo / Chow Yun Fat films The Killer and Once A Thief, the Woo war film Bullet In The Head, Jet Li's The Master, Duel To The Death and Warriors Two (which is the only one without a trailer). There are also some Premier Asia titles: The Grudge, Volcano High, Bang-Rajan and Champion, for which we get trailers, along with Bichutimoo and My Wife is a Gangster, for which we only get adverts. I think that City on Fire has to be respected as a classic of the 'heroic bloodshed' genre. If you are a fan of Chow Yun Fat or Ringo Lam, you should give this a whirl. But, it is not quite as polished or even coherent as most of Woo's efforts or most of the latter films that came from the both of them. The presentation is fairly decent, if nothing to shout from the rooftops about. You're not going to be disappointed with this clean transfer and reasonably solid audio track. The extras are quite long-winded, but at least Hong Kong Legends appear to have gone to some effort once more.