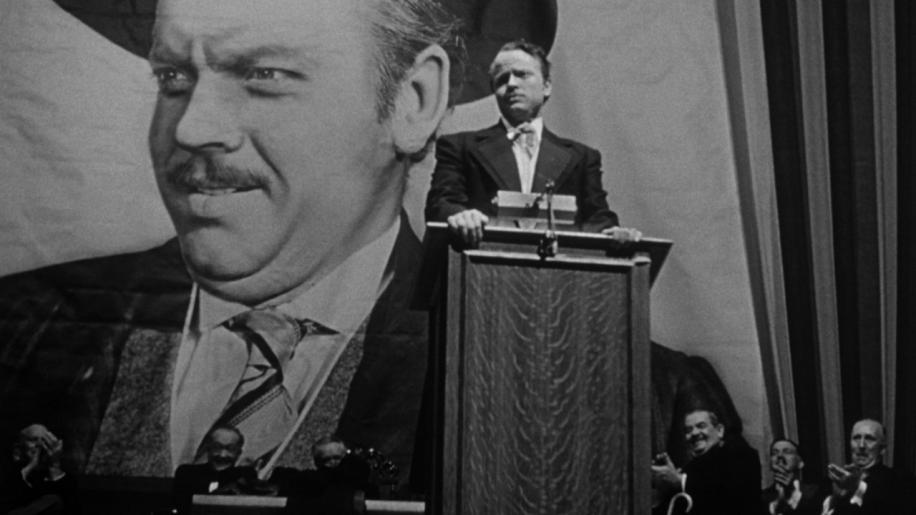 There’s a certain amount of perceived snobbery attached to saying that you like a film that the American Film Institute claims to be the best film ever made. So much, in fact, that it almost causes an in-built resistance due to the feeling that it must be ‘art’ and therefore too high brow for the average modern day viewer. But then again, maybe it really is there because it is just such a damn good movie. Certainly, ‘Citizen Kane’ is required viewing on many media courses and so it’s probably the most studied film ever made. Back in 1941, however, it was greeted with indifference by audiences so it came and went without much acclaim. Over the years, however, it has gained the respect of critics and film buffs alike – often considered to be the work of a genius and also given the title of cinematic masterpiece. Now, on its 70th Anniversary, it receives a fully restored release on American Region free Blu-ray and an Ultimate Collector’s Edition at that.

‘Citizen Kane’ itself is an interesting film, but not half as interesting as the background to its production. Orson Welles was seen as the ‘wunderkind’ of his time who by the age of 24 had conquered the theatre with several groundbreaking productions and the radio with his panic inducing ‘War of the Worlds’ broadcast – so it was only fitting that he should make his mark on the Silver Screen with his own film. No small feat considering he had absolutely no movie directing experience at all. Everyone was waiting for him to fail, not least among whom was William Randolph Hearst, the world’s first big Newspaper tycoon.

Despite Welles’ attempts to keep things secret, including beginning production at RKO under the pretence of shooting tests, word got out that the film he was making was about the life of Hearst - which did not please the big man one iota. What really made Hearst hit the roof, however, was the discovery that everyone would be wondering about the meaning of ‘Rosebud’ – his own pet name for his mistress’s most intimate area. Hearst immediately used his publishing clout to put the frighteners on the Studio bosses with threats of releasing some photographs showing them and their stars in compromising situations. The end result was that all of the major Hollywood Studios clubbed together to buy the negatives and every print of ‘Citizen Kane’ in an attempt to stop it reaching the cinema screens. It’s clearly obvious from cinema history that Hearst’s machinations failed, but the full story can be seen in the documentary ‘The Battle for Citizen Kane’ which is included in the three disc Ultimate Collector’s Edition.

With regard to the film itself, it’s amazing that someone with a total lack of cinematic experience like Welles could turn in such an impressive piece of work as ‘Kane’ for his first feature. When you think of it though, he was not hampered by Hollywood convention as he just didn’t know what that was, so making a film his way was going to result in something new or different. While Welles co-wrote the script with Herman Mankiewicz – and the old adage that there’s no point getting the camera out of its box if the script isn’t right, is as true today as it was then - many people seem to just gloss over what gave the film its stunning visual impact, or indeed who.

Gregg Toland was one of Hollywood’s youngest and most sought after cameramen at the time. He went to Welles wanting to work on his film as he felt that he could only learn something new from someone who had never worked in film before. Welles background in the theatre meant he was used to the audience seeing the whole stage, from front to back – something that the cinema’s relatively shallow depth of focus normally did not allow. Toland had been experimenting with the creation of ‘deep focus’ photography for some time. In order to create a shot that was sharp all the way from the foreground to the background meant increasing the ‘depth of field’. You do this, mainly by reducing the size of the aperture on the camera lens. In order to be able to film with a very small aperture, you need lots of light on the scene, so they used a great many ‘Brutes’ (massive arc lamps) that you would normally use for Technicolor photography. Also, a faster film stock helps greatly so they used the new (then) Kodak Super XX Panchromatic stock that was four times faster than the standard black-and-white negative yet with no perceptible increase in grain. To achieve the desired effect, Toland also used wide angle lenses with a special coating that reduced flare and helped increase light transmission.

When you take a look at some shots such as the one where the young Kane is being packed off to be looked after by the Banker by his Mother and Father, each character is on a separate plane at different distances from the camera, yet each is pin sharp – including young Charles, seen playing outside through a window. The same effect is used dramatically in the scene where Kane has lost the election for Governor and the camera is set very low and wide when Leland and Kane look like giants as they have their conversation. This wide view allowed Welles to have long takes and to adopt a more fluid style of film making without the need for intercuts – recreating his theatre on film.

The more perceptive readers here will have noticed that this review has been written with an almost total lack of reference to the story of ‘Citizen Kane’. The story has been dissected and examined under a microscope by many others, so any repetition would just be futile. Those of us old enough to have seen it before will know it almost off by heart, while those young enough never to have watched it deserve the chance to see it for the first time with the eyes of a discoverer. So, I’m not going to ruin a potentially wonderful experience for them.

The best American film ever made? Who knows for sure, but what I do know is that there are very many people with a great love for it – and hopefully many of today’s younger generation will add to their number.