The actual concept is not bad, but the execution and delivery are 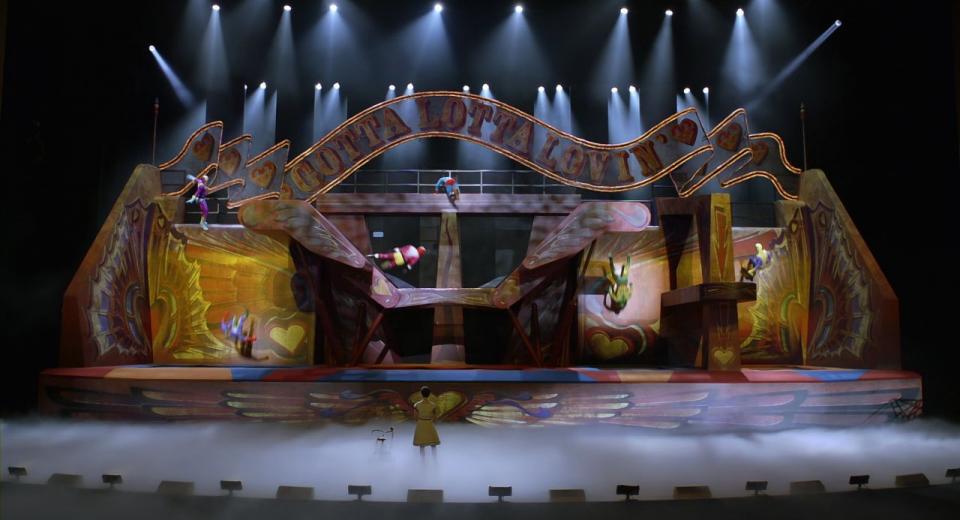 These comments refer to the 3D release and may not apply to other versions. You might expect that with James Cameron at the controls, the 3D aspect of this production would be a scintillating journey into the third dimension. The reality is that you could not be more wrong. Notwithstanding levels of crosstalk I have not experienced since Tron Legacy, the 3D is far too flat and devoid of “Wow” pop out moments to be satisfying. The camera convergence of the 3D image on a number shots is appalling, with some objects appearing at the correct focal distance, while others are out of place and out of 3D alignment. This means that however hard you try, your eye cannot perceive them as realistic 3D. The sense of scale of the shows is lost, and all too often a safety wire, prop or even another camera pulls the eye away from the performance and back to the harsh reality of the mechanics of the show. The depth of field really suffers, as for the most part, the stage lighting from the stage show cannot easily be changed or added to by much, leading to larger lens apertures than are ideal, with soft focus foreground and background action surrounding the key performers.

Colourising is always going to be a compromise when using theatrical lighting rigs and stage makeup, all of which is optimised for quite a rosy hue – around 3200K. 3D in particular does not like neon “day glow” colours, leaving them looking quite flat, as the reduced dynamic range struggles to deliver the saturation levels required. The main issue is that the shows were never designed to be viewed side by side, and that is what we are doing here, the red and yellow Ka rubbing up to the blues and whites of “O” in a most disturbing fashion.

Looking at the transfer itself, the all digital workflow has provided a good copy onto the Blu-ray, other than the issues with 3D crosstalk and a slightly muted colour gamut. Presented in 24FPS 3D at 1.78:1, this disc demands a high contrast ratio, as many of the scenes are fringed in darkness, with the main action lit almost to the point of clipping by the powerful theatrical lighting. With the reduced contrast available with current 3D systems, this is an issue here, with the 2D disc looking significantly nicer, with a broader colour gamut and less low level detail loss. One obvious scene change where this can be seen is where the two main proponents slip from the real world into the circus underworld. On the 2D disc, this is a smooth transition through black, but on the 3D disc, everything fades to black and stays there for longer, until the levels reach a point that the eye can perceive a brightness increase again.

There is some use of CGI in the joining scenes, but none during the acts themselves. This leaves things looking and feeling somewhat disjointed as we move from the dream world back to reality with a harsh jolt. Some of the compositing is a little scruffy as well, with 3D depth perception not always that accurate.

I think for me, the most disappointing aspect of this disc is the 3D quality. I had extremely high hopes – given its pedigree, yet it has delivered a below average performance. Both Life of Pi and Oz the Great and Powerful I have reviewed recently deliver much better 3D than this, with more complex imagery CGI. One could argue that the budgets here are much smaller, but this cannot excuse poor camera setup or depth perception issues, something even the cheapest consumer cameras can be setup to minimise. In 2D, I give this film a solid 8, but the 3D issues simply cannot be ignored. Finally something to be impressed about! The DTS-HD MA 5.1 track is powerful, immersive and complex, all making it satisfying and enjoyable to listen to. Dialogue is minimal, with Mia uttering just one syllable during the entire show, while the clanks, groans and thumps of the stage show are subtly added in to the pre-recorded backing tracks of the various scenes. There is no new music composed specifically for the movie, with almost all tracks lifted from various Cirque shows. This is no bad thing as Cirque has almost always enjoyed stunningly orchestrated and arranged world music and this is used to great effect here.

Your surround system will get a good workout, with the LFE used to impressive effect, as well as demanding a lot from your surround speakers as well. Despite the lack of dialogue, the centre channel also gets in on the action, helping to steer effects around the sound image as well.

If I have a criticism, the dynamic range could be wider, as it is apparent that many of the tracks are lifted from the masters used for the live shows. These are deliberately mixed to a limited dynamic range to provide the fullest sound to audiences in a potentially noisy theatre, but in a quiet living room, we could handle a little more. The 3D SKU consists of two discs, the 3D movie and the 2D movie and extras disc. With the main feature running to just over 1 hour 30 minutes, it would have been possible to squeeze the extras onto the 3D disc as well, preventing the annoying change over to watch the two featurettes, but to be honest, they are not that great anyway.

Making Worlds Away is actually an extended publicity piece, with a short running time and punchy presentation. If gives a few insights into the production process, but these are all too brief and squished in between shots from the main feature itself. Cameron and Adamson both get to utter a few words, but it stops short of being a full interview with either of them.

A Day in the Life with Erica Linz follows the star of the movie as she works with a trio of handsome boys on a new dance routine. Nothing to do with the movie itself, and very little reference to Cirque, but it is interesting to hear about her career progression and to see just how talented, strong, committed and flexible you need to be to perform even the simplest of routines. Less a day in the life and more a day in the studio, as we do not see Erica outside of the practice barn. Both special features are presented in HD, which is as expected for current releases, but a director’s commentary with Cameron and Adamson would have been quite welcome here, as explanations as to some of their creative decisions would have been quite revealing! This production really fails to do justice to the magic that is Cirque do Soleil. The shows themselves are quite narrative enough, without the need to cut them about and wedge a story around them. The actual concept is not bad, but the execution and delivery are too poor to recommend this disc for anything more than as a brief demo disc – and then only in 2D!

Technically, the 3D is a massive disappointment, with all the worst aspects of the technology laid bare. Filming live events in 3D is quite possible, with a number of concerts quite successfully delivered, but this series of stage shows has just not made the jump into the next dimension. Bin the 3D disc and watch the 2D, as it looks much better in so many respects.

The only saving grace is the sound, which deliver PA system levels of power and immediacy, while enveloping you in a dreamlike sound field to carry you to the magical land of Cirque. It is just a crying shame the rest of the production fails to live up to these high words of praise.