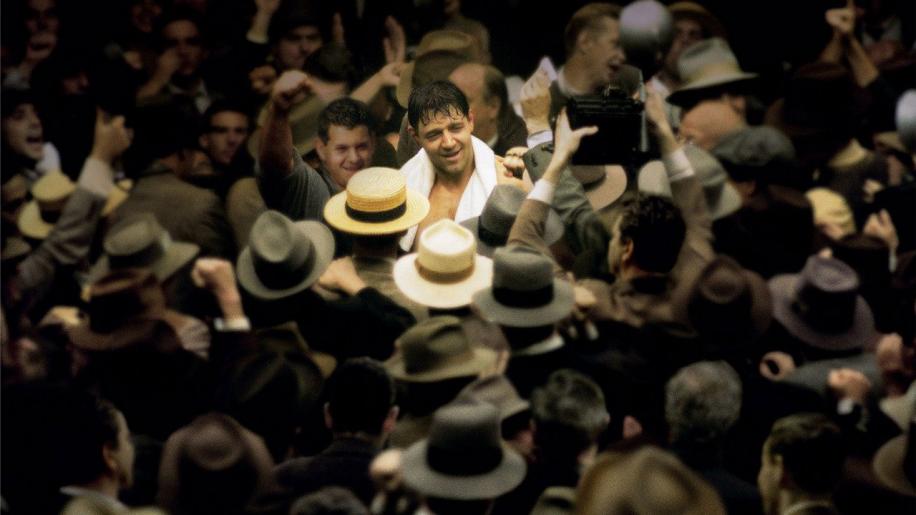 Russell Crowe is king of the cinema heroes at the moment, bringing courage and a sense of decency - and real masculinity - to every role he takes, from his outstanding role in Gladiator, to his commanding performance in Master and Commander. He's a warrior, a fighter, a leader, a lover and a great hero figure for cinematic audiences across the globe. He's a macho man's man in a time when few heroes can afford to be quite so tough and uncompromising, in a time when our kids are being brought up to idolise bespectacled bookworms who believe more in sorcery than swords. Here he puts his fists to work as a heavyweight boxer who attained fame in New York during the thirties.

This is the true story of James J. Braddock, the 'Bulldog of Burgen', a New Jersey-born boxer who rose to fame during the late twenties, raging his way through the ring with umpteen wins. Acclaimed for his heavy right blows, a tragedy in the ring left him dropped by the boxing syndicate and unable to get anything other than temporary work at the docks, barely enough to pay for the electricity in the house where his wife and three kids reside.

As the recession hits and times get even harder, Braddock hits rock bottom, forced to even beg to make his way in life, to keep his family together and alive. When he gets the opportunity to fight again, he jumps at the chance, but after such a long break is he really up to the challenge? With his wife and every bookie in the country worried about him even surviving in the ring, his return to the ring becomes a real test of his mettle and his motivation, a real show of true courage.

Cinderella Man is something of a fairytale movie, its narrative telling a heart-warming, tear-jerking and power-punching story of the true strength of the human spirit. It really showcases a noteworthy example of how much a man would do to take care of his family, to just survive. Ron Howard has done another superb job bringing this one to our screens, shooting the quiet lulls in Braddock's life with equal importance and attention to detail as the important fight sequences. However, the fights are really standout, with every single one bringing the blows home and into your life, making you feel the way the hero feels, the desperation, the struggle and the will to win. Every single fight carries its own significance and, through clever filming techniques and punchy ringside commentary, you really get involved in every aspect of the action.

Russell Crowe is outstanding as Jimmy, hero prize-fighter, once again taking on a role where you almost forget that it is him playing the part but, at the same time, reminding you that nobody else could be so perfect in it. Whether sporting a convincing New Jersey accent, charming his wife, interacting with his kids or raging around the ring, he really embraces the character and makes it his own. I've seen plenty of boxing movies recently which have been acclaimed for various different reasons and realistically this one does not tell a vastly different story from what we have heard before, but it does tell it remarkably well, warming your heart with the feeling that there are still true heroes out there.

Renee Zellwegger, boasting her own unusual Marilyn-Monroe-esque accent, is also on top form as the worried-she-is-going-to-be-made-a-widow wife of the prize-fighter. Both strong for her husband and desperately helpless to save him from what happens in the ring, like Cold Mountain, this is a role which really brings home the fact that Zellweger is a quality actress. Sideways' Paul Giamatti is also particularly noteworthy as Braddock's faithful trainer, Paddy Considine, who was gripping in the powerful drama, Dead Man's Shoes, pulls off an important supporting role here as Braddock's dockside friend and The Long Kiss Goodnight's Craig Bierko is also very convincing as the psycho opponent that Braddock has to face, infamous for having killed numerous opponents in the ring.

Cinderella Man is a serious and powerful boxing drama, but it is also so much more, telling a moving tale of one man's strength and determination to fight against all odds, just so that his family can eat. It is well-shot and well-developed, never seeming as long as a two-and-a-half-hour movie could seem, filled with rich characters and superb performances and grounded by the fact that it is not actually a fairytale - this is a true story. Highly recommended.