This film could easily be called Christopher Robin: Nostalgia City. 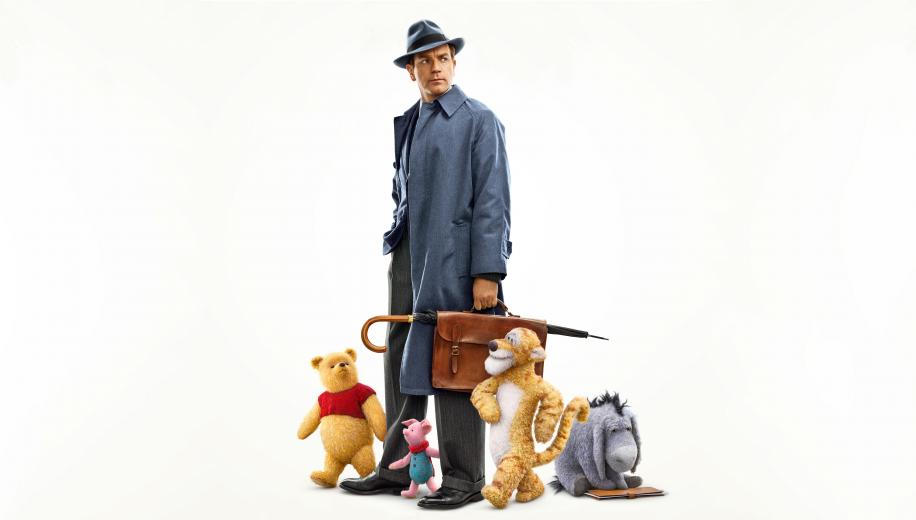 Pooh, Tigger and pals are back – with a brand new CGI look and a grown-up Christopher Robin to boot.

Christopher Robin follows some pretty well-trod footsteps; it comes in the wake of Disney live action/CGI films like The Jungle Bookand Beauty and the Beast, it’s hot on the heels of Paddington 2for the title of most beloved big-screen bear, and of course it’s bringing truly universally beloved children’s characters back.

Christopher Robin (Ewan MacGregor) is all grown up. Right from the outset it should be obvious that this film is going to be a punch in the emotional gut, as we see our titular hero pack up his cuddly friends and head off out into the world for university (quickly followed by the war, marriage and a steady job). Just like that, the question of where our childhood hopes, dreams and friendships go when we’re too busy to think about them; much like Inside Out, this is clearly a film that deals with some big emotions.


This is clearly a film that deals with some big emotions

When you’re not reminiscing about your own fond memories of Winnie the Pooh and his pals, you’ll be thinking about your childhood toys, and your (rose-tinted) idyllic youth spent frolicking in your version of the Hundred Acre Wood.

And you’re more than likely to see at least a little of yourself in MacGregor’s harried, world-weary Christopher Robin. In adulthood, there’s a lot less exploring and a lot more working. As the efficiency analyst for a busy luggage company, he’s busy – too busy for his wife Evelyn (Hayley Atwell), their daughter Madeline (Bronte Carmichael) and fun.

Leave it to our rotund friend Pooh to change all that. In many ways, this is your made-to-measure kids’ film. There’s fluffy, cute animals characters, there are moments of silly comedy, there are high-speed cross-city chases and there are big, sweeping moral pronouncements. Let’s face it, a film about Winnie the Pooh should be for kids… right?

It’s really touching to quantify Christopher Robin as a children’s film. For starters, the nuances in MacGregor and Atwell’s performances are decidedly mature and emotionally complex. Then there’s the morose, sombre, gloriously gloomy palette in play from director Marc Forster and cinematographer Matthias Königswieser, which brilliantly evokes Christopher Robin’s post-war adulthood malaise. And there’s the film’s core message, which is almost hammered over the audience’s head by the conclusion – all work and no play makes Christopher Robin a dull boy. Quality time (and play time) is the stuff that counts, not work hours or bonuses.


While the emotional narrative might be lost on a young audience, the gorgeous visuals won't be

If you think too hard, a lot of the film’s concept is pretty bleak too. Other adult humans can see Pooh, so he doesn’t seem to be a figment of Christopher Robin’s imagination. The Hundred Acre Wood seems to have fallen into a bit of disrepair since its creator stopped visiting, and it seems that – much like in the life-ruining Bing Bong scene from Inside Out– Pooh’s furry comrades haven’t fared all too well while their human leader has been off adulting.

While a lot of the emotional narrative might be lost on a young audience who don’t know the harrowing tribulations of the 9-5, the gorgeous visuals and outstanding CGI animal characters won’t be. Overall this is a surprisingly dark film – both in terms of visual tone and emotional tone. It still packs in enough to keep kids charmed and enamoured of the real-life animals (who’ve never looked better than in this stellar animated version), but its core is one of wistfulness and longing.

Though there’s a lot of emotional depth well-hidden beneath the surface, some lovely voice-over acting, a great MacGregor performance and disarmingly loveable CGI characters, with the all too familiar concepts of the emotionally absent father and life-changing and corporation-shifting realisations (Mary Poppins, anyone?) the film’s story does start to drag a little, with little-to-no meaningful conflict, and begins to look as well-worn as the tousled and frayed toys making up the ensemble cast.


A lovely and moving watch

It’s not what you’d expect of a Winnie the Pooh vehicle, and while it’s not quite the complex and compelling script we’d maybe expect from a scriptwriting team who’s greatest hits include Spotlightand Hidden Figures, it’s a lovely and moving watch.

Indulge in a little good-natured nostalgia, bask in the majesty of AA Milne’s wonderful characters, and be shamed into spending more time with your family. Narrative lulls and weirdly dark ambience aside, this (100 Acre) would be a memorable and affecting summer watch for the whole family.