Can the high-end be truly convenient? Chord thinks so. 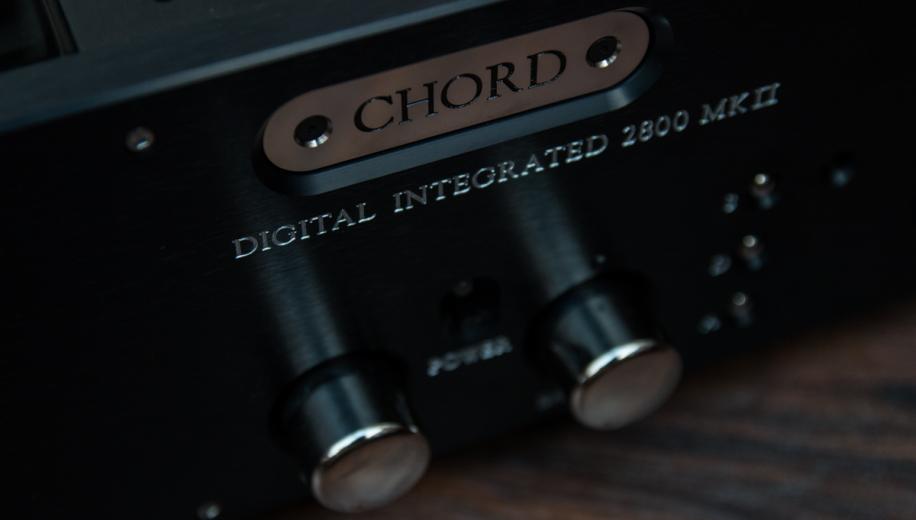 The Chord CPM 2800 MKII is an integrated amplifier from Chord Electronics that is part of their full width range of components. At the relatively lofty price point that this amp pitches in at, the bulk of the competition comes from amplifiers that are rather less laden in features and functionality. The Chord is fairly unusual for an amplifier at this price in that it comes in a single chassis and contains both amplification and digital to analogue conversion.

This last bit of information ought to cause people's ears to prick up because Chord Electronics could be said to be 'a bit good' at the business of making digital to analogue convertors. The Mojo and Hugo portable DACs are sensational performers and their high-end products boast reference levels of performance. If you are buying an amplifier, it won't do any harm for it to be equipped with some serious decoding hardware.

Many of you will no doubt have noticed though that the Chord carries a fairly substantial price tag. We have tested amplifiers with decoding built in before – including another one this month – but none of them have tipped the scales at nearly seven thousand pounds. Can the CPM 2800 MKII justify this sizeable figure and deliver a little convenience to the high end? Both amps share the same pre and power section and this is a class A/B design that offers 120 watts into 8 ohms. Chord is somewhat unusual in terms of their design practises in that they use switch mode power supplies in their amplifiers. Chord feels that when correctly implemented, the considerable reserves of power that switch modes can instantly deliver during dynamic peaks of music make them ideal for the task of being used in this fashion. Certainly, the numbers that the CPM 2800 MKII can generate suggest that their be some mileage in this thinking. The power output 'only' rises to 170 watts into four ohms but the Chord can deliver 180 watts peak into 8 ohms and 220 into four to handle big peaks of music. The long and the short of it is that there aren't many pairs of speakers that are going to cause the Chord much in the way of problems.

This power amp section is controlled by an analogue preamp section built around an ALPS Blue Velvet volume potentiometer (for those of you not unduly excited by the guts of a volume control, suffice to say that this is a very lovely example indeed). There is a balance control but nothing in the way of tone controls. You do get five analogue inputs, two of which can use XLR connections. There is also an AV bypass meaning you can use the CPM 2800 MKII as a power amp in an extended AV system when not using it as a stereo amplifier.

Where the CPM 2800 MKII takes a swerve from the 2650 is that in addition to these analogue inputs, it has optical, coaxial, USB and Bluetooth connections. Effectively, the CPM 2800 MKII contains the innards of a 2Qute DAC which is very highly regarded in its own right and boasts Chord's bespoke decoding technology. Instead of a DAC chip like a Wolfson, If the results weren't any good, this would seem slightly pointless but you only need to look at the reviews of the Hugo and Mojo to see that Chord has to be seen as one of the absolute leaders in digital audio right now and the CPM 2800 MKII effectively gives you an absolutely exceptional example of their work in the same chassis. The specs are, needless to say, pretty much state of the art. The Chord supports 24/384kHz playback via both the USB and SP/Dif connections and is DSD capable via USB. The USB input is completely isolated from the rest of the circuitry – both to protect it from the amp section and to prevent any nastiness from the connected device making its way into the audio path.

Neither is the Bluetooth some sort of last minute convenience feature. Chord can lay claim to being one of the very first audio companies to take Bluetooth seriously and the implementation in the CPM 2800 MKII is largely bespoke. It also benefits from the fitment of a full size aerial which means that unlike the Hugo, the range is rather more extensive. Apt-X is supported allowing for lossless transmission. Chord Electronics equipment covers a range of forms and designs but everything is tied together by the over arching feature that it doesn't really look like anything else. The CPM 2800 MKII is no exception to this but there are some caveats to the review sample that are worth taking a moment to elaborate on. If you look at the web page for the CPM 2800 MKII, you will see that the unit at the top of the page is a little different to this one. It is fitted with what Chord calls the 'Integra Leg System,' which fits a quartet of cylindrical legs to the outer edge of the chassis. These are available in black or silver inclusive in the price (and you can have black feet on a silver unit and vice versa) and for a surcharge, you can have them in polished nickel too for something a but more... fabulous.

The review sample sports a new option which is a pair of piano black side cheeks and smaller feet moved inboard and under the chassis. This makes the amp a little smaller, slightly more subtle and – in my opinion at least – absolutely stunning. The black unit retains chromed controls and a chromed name badge and the effect is really rather lovely. The aesthetic is a perfect balance of not looking like just another black box without being unduly gaudy. There are some other lovely touches. A set of LEDs buried in the rear of the amp under the vents will change colour to denote the incoming sample rate and in low light these give the CPM 2800 MKII a lovely glow.

The build quality is absolutely sensational too. The controls are well weighted and extremely solid and the rear connections also feel absolutely top notch. This is an expensive product (although in Chord terms, it's just about out of the shallow end) but it looks and feels like it is worth the asking price. There is a sense of occasion interacting with it that is vitally important when you're asking this sort of money for an amplifier. This being said, the remote is a little on the prosaic side and the display won't be to everyone's taste, although it is extremely easy to read. Effectively, the CPM 2800 MKII contains the innards of a 2Qute DAC which is very highly regarded in its own right and boasts Chord's bespoke decoding technology

The Chord has been used primarily with a pair of Audio Note AN-K SPx speakers. While very easy to drive, they are sufficiently revealing to show up what the amp is doing. A Melco N1A has acted as the USB source and a Naim ND5XS has been used via coaxial digital and analogue. An Avid Ingenium Twin with Audio Note Arm III and Golding Legacy moving coil cartridge has been used via a Chord Electronics Chordette Dual phono stage as my usual Cyrus unit is away at present. All equipment has been connected to an IsoTek Evo 3 Sigmas mains conditioner. Material used has included lossless and high res FLAC, AIFF and DSD as well as Tidal, Spotify and vinyl. Before we delve into the absolute performance of the CPM 2800 MKII, let's at least acknowledge, if not completely address some elephants in the room. The Chord passed through review at the same time as the Audiolab M-One and you can have eight of them for the price of a single CPM 2800 MKII. You could have two Parasound Halo Integrateds and a nice holiday for the same price. Any and all comments about the Chord need to be made in light of it being a very pricey piece of equipment indeed.

With this out of the way, it also needs to be said that the Chord does a better job of justifying its existence than you might reasonably expect. Put simply, this is a seriously good amplifier that also has some sensational decoding to hand. Kicking off with the Naim ND5 XS connected by analogue RCA cables, the Chord reveals some very interesting, and largely positive, behavioural traits.

Compared to my resident Naim Supernait, and looking back through attached notes for various amplifiers, the Chord is extremely dynamic. It takes the intensity of And the digital? Well, there is a reason why I retain the services of a Hugo and Mojo for test work and that reason is that Chord's FPGA decoding system possesses the incredible ability to give you a warts and all take on what is in a recording without tipping over into harshness or stridency unless that recording is truly terrible. There's no embellishment or tweaking, just an utterly dispassionate take on what it is playing. If this sounds anticlimactic, I can't help you with that. This is how you get to the music as the studio intended you to. Despite the enormous amount of processing power at work, there is no sense of it being 'digital.' The greatest compliment I can give it is that is sounds consistently 'right.'

This means that the combination of amp and decoding is a very special one. With the USB connected to the Melco N1A, the Chord is a self contained masterclass in an accurate, balanced but utterly enthralling sound. There are times when listening to material that really grooves, that I prefer the less accurate but slightly more playful sound of my Naim pairing but we are reflecting on degrees of excellence that might be seen to be polishing the cannonball – I certainly wouldn't feel shortchanged living with the Chord from here on out.

The final ribbon to what is already a very inviting bow is that the Chord probably represents the apex of Bluetooth playback I've yet experienced. With the added range and stability from the aerial, the CPM 2800 MKII is the easy equal of more 'normal' Bluetooth devices but it achieves a level of performance with a 'convenience feature' that is simply outstanding. If you are a Tidal subscriber, you can walk into the room, have the Chord and your phone pair automatically and I defy you to tell me that the resulting performance is anything other than 'hi-fi.' For a few people, the presence of Bluetooth in a high end product will seem utterly contradictory. All I would say, is that you need to try it before you condemn it. The Chord is a self contained masterclass in an accurate, balanced but utterly enthralling sound

Should you have skipped ahead, to this point, let me reiterate once again that £6,690 is a great deal of money. The Chord CPM 2800 MKII is neither eight times better than the Audiolab M-One nor twice as good as the Parasound Halo Integrated. To judge it this way is to miss the point rather. The Chord takes the attributes of already great products and makes them even better. The result is an amplifier that offers all the convenience of a 'lifestyle' device with the performance of the true high end. That it combines this with exceptional build and real room presence is the final piece of the puzzle. It isn't cheap but the CPM 2800 MKII is a pinnacle of integrated amplifier design and represents the basis of a spectacular audio system. For this reason, it comes highly recommended.