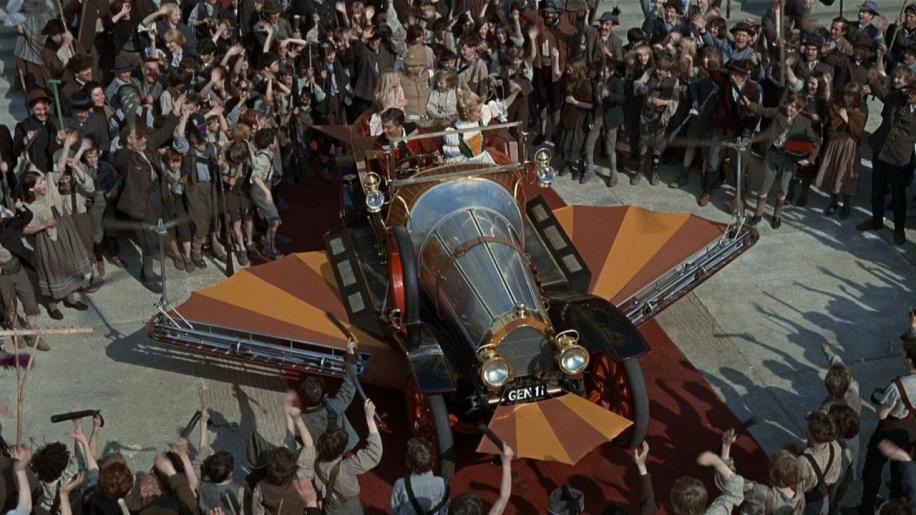 They say that time travel is impossible, but the movie of ‘Chitty Chitty Bang Bang’ transports me back to 1969 and a family holiday in Whitley Bay. We’d arrived on a Friday and ventured out to the Spanish City fairground attraction with only a limited amount of money, so we wouldn’t blow all of our holiday cash on the first night.
On passing the Essoldo Cinema, we spotted that it was showing ‘Chitty Chitty Bang Bang’ for the last time before changing its programme for the following week. My brother and I had been aching to see the film for a while. Indeed, I had the Corgi Toys model of the car and had read the storybook several times over so my Mum, Dad, brother and myself desperately tried to scrape together the price of admission. I still recall the great relief at finding we had enough money (only just) in our pockets to get us in to see this highly anticipated movie.

The film was no disappointment. It had everything an 11 year old lad wanted. A flying car, adventure, an evil Baron, a scary Child catcher, a beautiful leading lady (kissing – Yuk!) as well as some great and memorable songs by the Sherman Brothers.
Over the years since, we’ve seen it on TV, video cassette, DVD and now it has arrived in High Definition on UK Region free Blu-ray – looking and sounding far better than ever before.
It’s hard to imagine now that it wasn’t a massive success upon its original release as it has a massive fan base and even enjoyed a West End Stage revival not so long ago with Michael Ball as Caractacus Potts and Paul O’Grady as the Child catcher.
But back to the movie. It was produced by none other than Cubby Broccoli, in between Bond movies, based on an Ian Fleming book originally written as a bedtime story for his family. The movie screenplay was written by Roald Dahl with songs by Richard & Robert Sherman (who had enjoyed great success with their work on ‘Mary Poppins’) and the choreography was by Marc Breaux and Dee Dee Wood who had also worked on the movie about everyone’s favourite nanny.

Dick Van Dyke (Well, stroik a loight, it’s Mare-ree Poppins) only agreed to take the role of inventor Caractacus Potts on the understanding that he wouldn’t be doing another English accent. He was probably still smarting from the ribbing he received for torturing the English language in 1962 with his Cocker-knee chimney sweep.
The role of love interest Truly Scrumptious was originally intended for Julie Andrews, but when she became unavailable it went to the beautiful Sally Ann Howes.
Lionel Jeffries turned in a memorable performance as the eccentric Grandfather, who claimed to be ‘Off to India’ dressed in a pith helmet, although he went no further than the outside toilet. Funnily enough, he was four years younger than Dick Van Dyke when he played his father.
The ‘baddie’ Baron Bomburst was played by Goldfinger himself, Gert Frobe, and the ‘You’re my little chu-chi face’ musical number he performs with Anna Quayle as the Baroness is extremely funny as he tries to do away with her several times during the song.

Of all the songs in the movie, the title song just has to be the most tuneful - sung by Dick Van Dyke and the two children as they take the newly re-constructed, gleaming car for its test drive in the Buckinghamshire countryside. The car was built by the Ford Motor Company for the movie and was looked after by Pierre Picton, who owns it today, and still turns heads with it at special events. I was lucky enough to get up close and personal with it when it appeared in Aldershot a few years ago. I also timidly approached the Child catcher’s wagon parked outside the Props Department at Pinewood in the late 1980’s.
Now, the Child catcher caused more nightmares for kids than Frankenstein ever did. He was played in the movie by ballet dancer Robert Helpmann who was originally more famous for his role in ‘The Red Shoes’ alongside Moira Shearer. As an 11 year old, I found him extremely creepy with a menacing, evil edge – probably influenced by scriptwriter Roald Dahl, as that’s his kind of thing.

The two kids in the film, Jeremy & Jemima, as played by a young Adrian Hall & Heather Ripley, have a few ‘stage school kids’ moments but are generally quite charming. It’s interesting to note that the little girl had a broad Scottish accent so had to learn to ‘talk posh’ for the film.

The Special Effects used in the movie for the flying shots aren’t quite up to modern CGI standards, but they’re not bad. The High Definition image does tend to reveal a black line around the characters against the sky. The back projection as Chitty goes over the edge of a cliff stands out like a sore thumb now, but back when the movie was released, the audience wasn’t so technically aware. Please note that the Blu-ray has the Intermission and Entr’acte music at this point, just as it did in the cinema.
Overall, the film still has great charisma and its time bound technical shortcomings don’t really matter.


The superb cast also includes great British character actors such as James Robertson Justice and Richard Wattis. Funny men Benny Hill (The Toymaker) and Music Hall star Max Wall add to the richness.
The song and dance routines are quite spectacular, such as the ‘Toot Sweets’ number which took around a month to film on a massive set constructed at Pinewood to resemble the interior of Lord Scrumptious’ sweet factory. The Victorian exterior was provided by Hampton waterworks. Many of the exterior locations can be found in the area around Pinewood and comedian Sid James’ old house provided the backdrop for a couple of shots. As Truly Scrumptious sings the ‘Lovely, lonely man.’ number she perches on the bridge by the ornamental lake in the Pinewood gardens, while the introduction to the dream adventure sequence was filmed away from home in the South of France.

Despite the much cherished personal memories, ‘Chitty Chitty Bang Bang’ still works as a great family movie and, above all, it’s good all round entertainment – that looks and sounds better than ever before on Blu-ray.